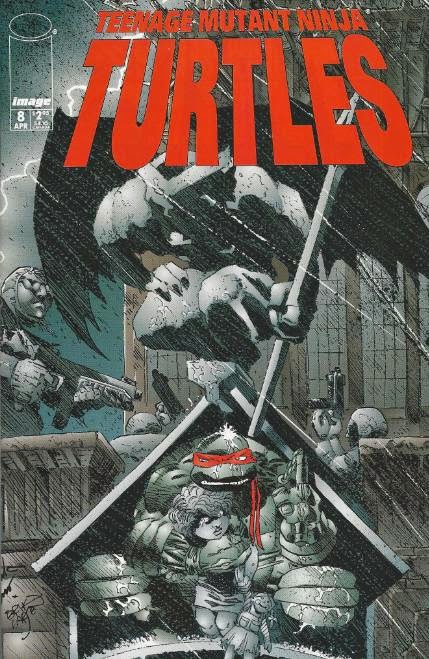 At Blake Towers, home of mob boss Antoine Puzorelli, Raph is still taking his fall after a Foot Soldier cut his escape line. One of Antoine’s goons takes a look over the balcony, unaware that Raph is actually above him. Raph comes plummeting down, catching the rope on the goon’s neck. Raph uses the instant of tautness to swing and crash through a lower apartment window and escape.

Elewhere, at a pub, Casey is still drinking away his sorrows over his missing daughter. Don continues to spy on him to make sure he keeps out of trouble, but dozes off for an instant, losing him. While passing through a bad neighborhood, Casey is approached by a gang of muggers. Instead of paying them off, Casey reaches into his bag, pulls out his hockey mask and bat and wails on them. Thinking them beat, he begins to stumble off, only to get shot in the back by one of the muggers. Don finally catches up and scares the hoodlums off. He picks Casey up, assuring him that his wound is not fatal, and lugs him off to the nearest hospital. 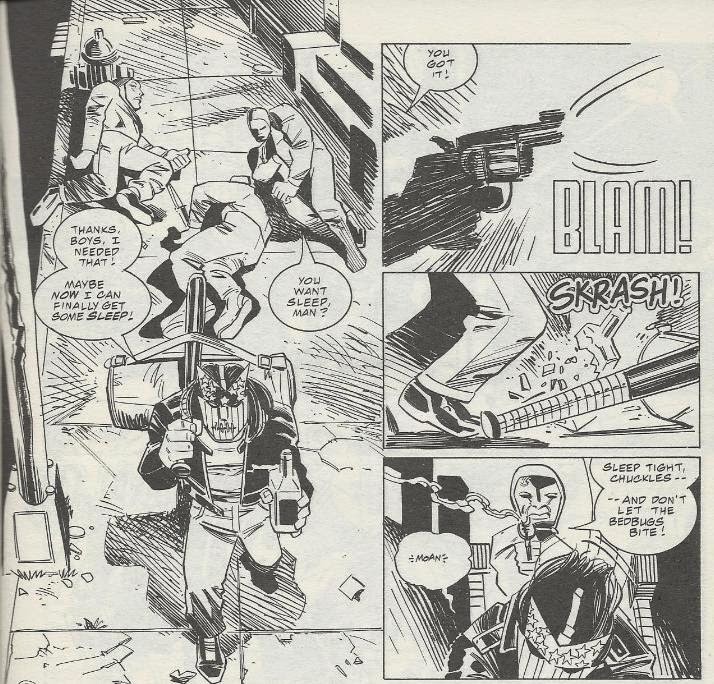 At the sewer lair, April, Leo and Mike are waiting anxiously for any word from or Don. Suddenly, a newscast on TV reports a giant bat epidemic in Midway City. In each of the cases, once one of the bats were killed, they reverted back to normal human beings. Mike and Leo realize that it must be Splinter’s doing, his mutagen causing “vampire”-like effects. Leo is a bit irked that he can’t go to find Splinter, instead stuck having to hunt down Shadow. Mike throws him the keys to the Triceraton aircar and tells him to go it alone while he and the others worry about Shadow. Meanwhile, April gets a call from Don about Casey’s condition and rushes to the hospital.

Outside, as Mikey waves Leo goodbye, he’s approached by the badly injured Raph. Mike patches Raph up as his brother relays everything he learned during his adventure. Deciding that this entire predicament is his fault, Mike leaves to bring Shadow back on his own. 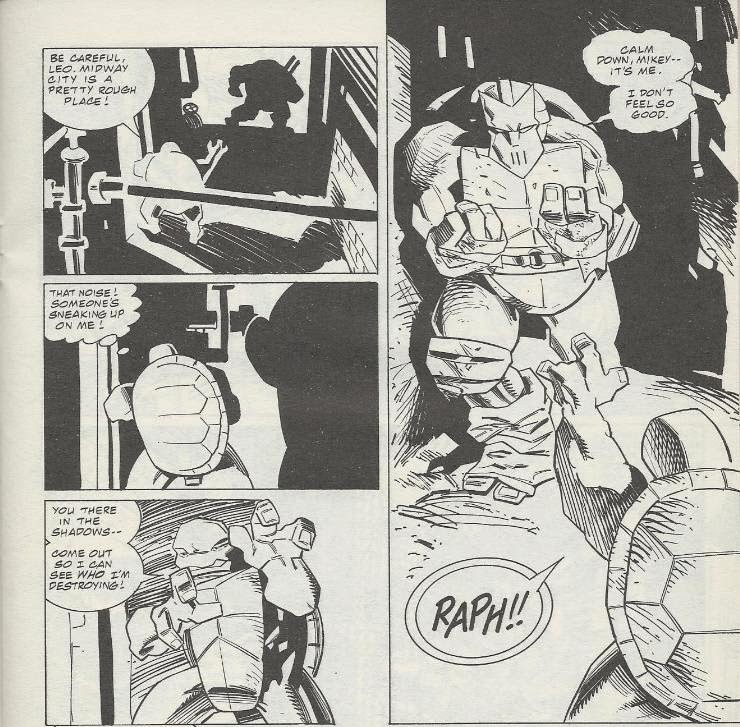 At Puzzoreli’s apartment, Mike peers in through a window and spots Puzorelli’s nephew Joey enjoying the big man’s private floozy. Apparently, Puzorelli has taken Shadow to St. John’s Cathedral for her baptismal. Mike races off.

At St. John’s, we find out that Shadow (AKA Maria Isabella Puzorelli) is Antoine Puzorelli’s grand-daughter; her birth mother, Gabrielle had conceived her with Antoine’s son, Albert, who was assassinated. The Foot had found out about this, kidnapped Shadow and delivered her to the unknowing Antoine with proof of her birthright…for a fee. The elderly Antoine took her in, not caring about who had been taking care of her before now (and not even knowing). 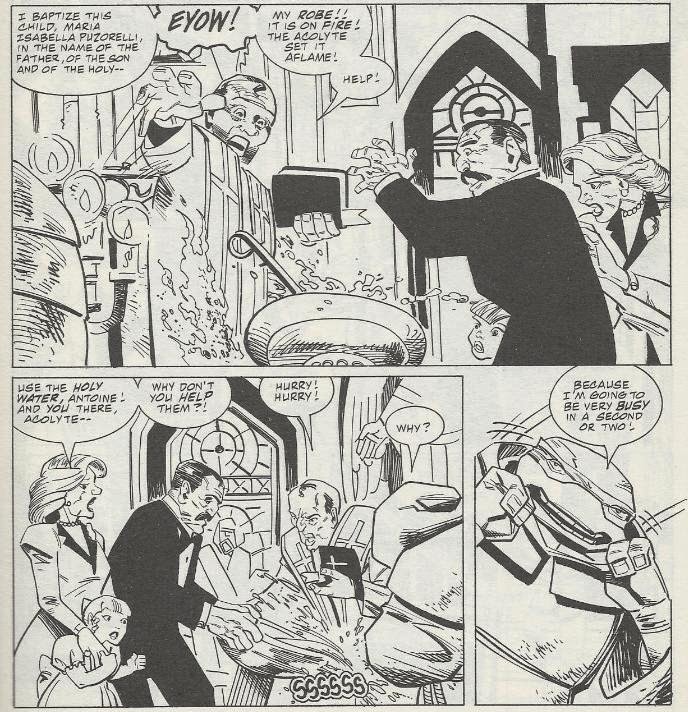 Before Shadow can be baptized, Mike sneaks in dressed as an acolyte and “accidentally” sets the Priest on fire. He then grabs Shadow and makes his escape. Unfortunately, he gets lost in the big church and winds up in the bell tower. Puzorelli’s mobster goons, lead by the late-to-the-party Nephew Joey, chase after Mike and onto the ledges of the roof. Cradling Shadow, Mike manages to disguise himself as a gargoyle and escape their notice. The ninja trappings lead Puzorelli to believe that the attack at his apartment and at the church were perpetrated by the Foot Clan, who hadn’t given him any trouble since the Shredder was killed, and swears vengeance. On the other side of the coin, he’s old and tired and wants to retire from the mob life with his granddaughter and considers leaving his empire to Joey. 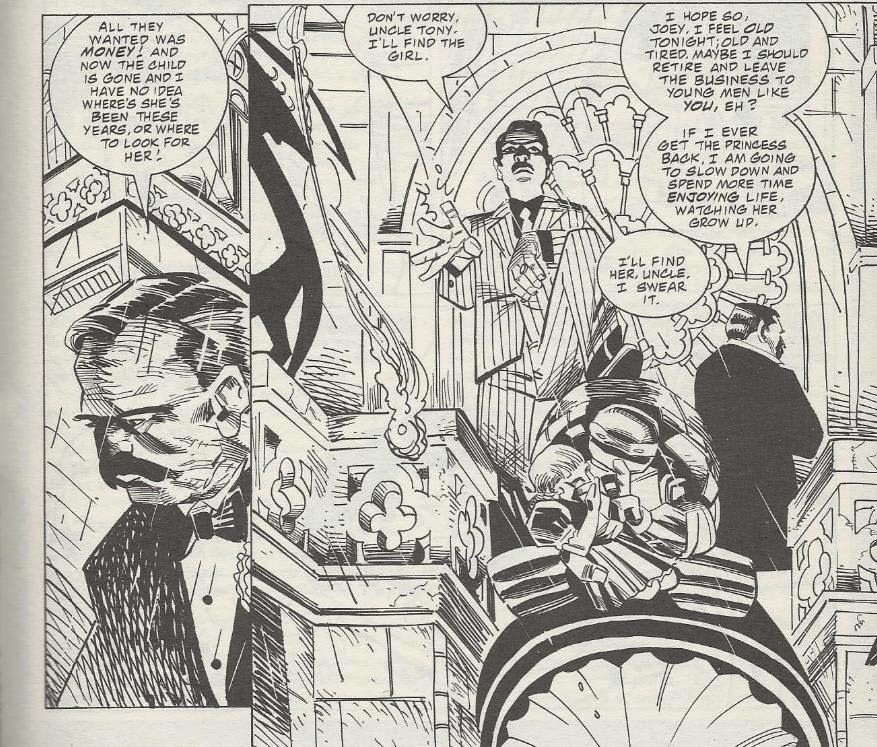 At the hospital, April and Casey kiss and make up. Mike then sneaks in through the window and reunites the happy family with their lost daughter. They ask Mike what happened and Mike offers to tell them the long story, but only over some pasta.

*Outside the pub is a sign advertising “Big Bang Comics”. The Turtles appeared in Big Bang Comics #10 in a story also written by Carlson.

Full of ninja intrigue, a nice spotlight on the Jones family and some genuine emotional connections between characters, the three-issue “kidnapping of Shadow” arc was definitely a step in the right direction for the series. A welcomed break from the super villainy of Lord Komodo and coming just before a big ole crossover with a bunch of Image Comics spandexed superheroes, it’s the kind of grim and gritty and more “down to Earth” TMNT story that I prefer. If you’re not into the superheroes or the goofy mutant animals that populate the TMNT Universe, then this is the kind of story arc meant for you.

The revelation of Shadow’s true parentage was a bit off the wall, but played up well. Despite his evil career choice, Puzorelli doesn’t come off as a particularly nasty guy; just a tired old man who genuinely loves his estranged grand-daughter and wants to retire with what’s left of his family. A welcomed contrast to the previous two-dimensional bad guy, Lord Komodo. It’s kind of hard to believe that Gabrielle, that sweetheart from Casey’s arc in “City at War”, could ever be involved with a mob boss's son, and as recently as only a few months before meeting Casey, but hey, we really don’t know a whole lot about Gaby when you stop and think about it. It sort of makes sense, anyway. She probably had a “thing” for dangerous men. I mean, she hooked up with Casey, after all.

Art-wise, this isn’t one of Fosco’s best issues. When they aren’t wearing their masks and there are no shadows to dress their faces, Fosco draws the TMNT with very blank and un-detailed countenances. While I normally adore his art, this style doesn’t really do much for me. Luckily, it’s only for a few panels and everything else in the issue looks just fine. Well, I still don’t much like his pouty-lipped “super model” rendition of April, but I can get over that.

Anyhow, at three issues this was a short but sweet arc and exactly the sort of thing the book needed after the silly and cartoonish opening arc. This is where the series really starts to pick up in quality and I especially enjoyed this story line.