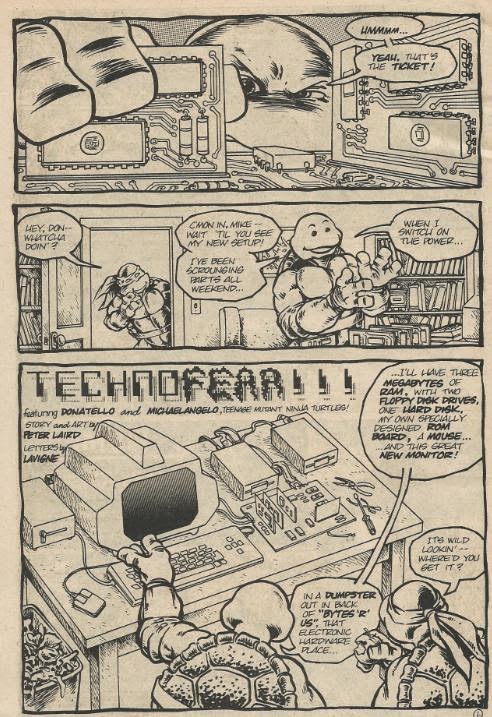 In his room in April’s apartment, Don has just completed his new computer set-up: three whole megabytes of RAM, two floppy disk drives, a hard disk drive, a ROM board, a mouse and a sweet new monitor! Can you believe it? THREE megabytes of RAM! Holy shit!

Anyway, Mike waltzes in and asks where he got the bizarre-looking monitor. Don says he found it in a dumpster behind “Bytes ‘R’ Us”. He thinks it may be a prototype that didn’t work out, but isn’t concerned: it’s his now. 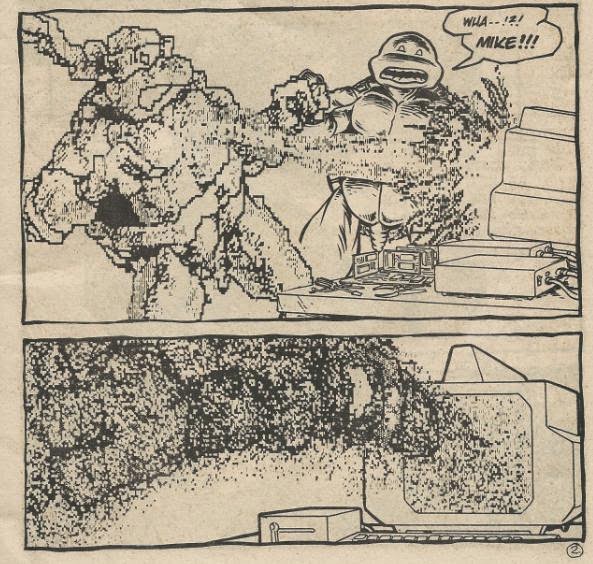 Don hits the power and suddenly a beam of energy bursts out of the monitor, “digitizes” Mike and sucks him into the computer. Inside, Mike is approached by Deuximax—The God in the Machine. Once his modems are connected, Deuximax intends to take over the world by dominating that weird new thing called the “internet” that absolutely no one has ever heard of. For beginners, though, he’s gonna trash Mike.


Mike makes a break for it, with Don observing everything on the monitor. He screams for Mike to follow the sound of his voice, and eventually Mike finds the portal out. He returns to the physical world with Deuximax hot on his heels. Before Deuximax can exit the monitor, though, Don pulls the plug. Don then takes the monitor and hurls it out the window, where it lands in a dumpster. 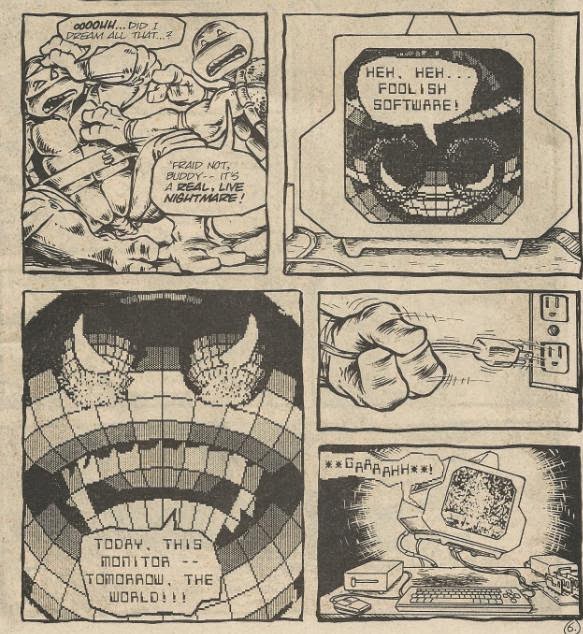 Later, a pair of bespectacled dorks happen upon the monitor. Fishing it out of the dumpster, they can’t wait to take it home and hook it up. Unbeknownst to them, the monitor is giggling.

*According to the index in Gobbledygook, the “digitized” computer effects were accomplished using an Atari 520ST, Tom Hudson’s “Degas” and “Cad-3D” programs. If you understood even one word of that, then you are really, really old.

I love reading or watching media from the 80s where characters yammer on about their sweet new computer systems. It’s just amusing. Chances are, my five year-old bottom-of-the-line cell-phone has a more sophisticated image display than Deuximax’s awesome futurisitic monitor from beyond the stars.

Like a lot of these back-up strips, weird things befall the TMNT with nary an explanation behind them. Sometimes, these bizarre occurrences would be expanded upon in a full issue of the main series (“Complete Carnage an’ Radical”), but mostly, they aren’t. “Technofear!!!” is one of those grand “WTF” stories, but you know, I kind of like em. Considering all the aliens and interdimensional monsters the TMNT fight on a weekly basis, it wouldn’t take much of an imagination to picture where Deuximax’s psycho-monitor came from.

The real attraction to this story, at least way back in 1986, was probably the “digitized” artwork effects used to depict the inside of the monitor. These days, you probably can’t buy a comic off the rack that hasn’t had its art or lettering or cropping accentuated with a computer in some way. Back in the 80s, though? Shit was done the ole fashioned way, you hooligans. So seeing “computerized” artwork was a bit of a novelty. Considering the user interface of 1986 era computers, I can’t imagine what Laird put himself through with that Atari and that Degas and that Cad and that...shit, I dunno. I was one year old when this thing was published. My first computer was an Apple/Mac II.

Regardless, the effect may not turn heads now, but back when “What the fuck is an internet?” was the common response to “Do you use the internet?”, it was something fairly exciting. Think of it like the computer effects in “Tron”. Yeah, they suck, but dude, the historical value!