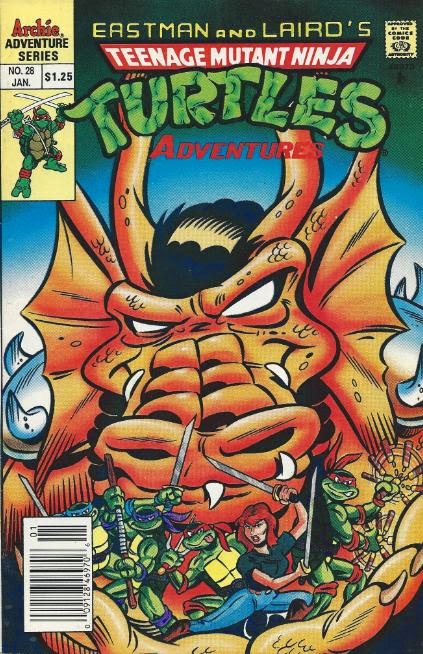 Summary:
Stashed away in the hull of a cargo plane, Splinter tells the Turtles and April the tale of Izanagi and Izanami, the pair of gods who created the islands of Japan (Izanami doing so by forfeiting his eyesight). While all the other Turtles are enthralled with Splinter's story, eternal buzz-kill Leonardo asks April to go over her story one more time so they can work on a strategy of attack. April retells her tale of how Fu Sheng and Chu Hsi (the Warrior Dragon) were kidnapped by a band of mysterious ninja and taken to far off Hiroshima, Japan (where their plane is currently heading). 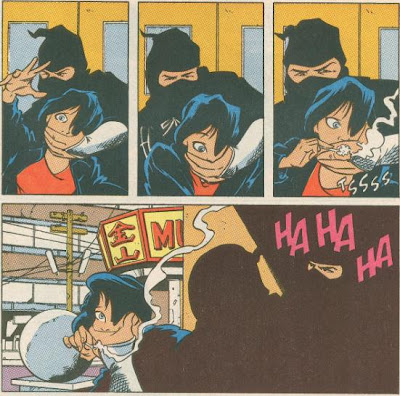 Down in Hiroshima, a young girl is sitting on a stoop smoking a cigarette when suddenly a group of ninja leak out of the shadows and seize her. Her struggle is in vain, as they whisk her off to a hidden and heavily guarded warehouse by the sea. She is greeted by Chien Khan, a masked man garbed in Feudal Era samurai armor, and his mysterious right hand ninja, cloaked in shadow. Decorating the room is Fu Sheng, tied to a pillar, and Chu Hsi, laid out unconscious on a table. Chien Khan wants to take possession of the soul of the Warrior Dragon within Chu Hsi and he demands Fu Sheng tell him how.

At the airport, our heroes are in a jam. Nothing but wide open spaces and armed guards in the middle of broad daylight as far as the eye can see; not exactly ninja-friendly. April concocts a plan to get them out of there and approaches a guard. She explains that they are television stars from America, arriving in costume, and are lost. The guard recognizes April O’Neil and happily shows them the way out, albeit in exchange for an autograph. As the guard ponders why all the American actors have Italian names, the Turtles, Splinter and April sneak into the sewers.

Donatello remarks that it’s odd how the city of Hiroshima is older than America, yet their sewers are newer than the ones in New York City. Heading East, Splinter explains that the sewers had to be reconstructed in the 40s after World War II. Suddenly, the Turtles are stopped by a group of street thugs carrying knives who refuse to let them pass.

Back at the warehouse, Fu Sheng refuses to help Chien Khan, who intends to use the Warrior Dragon to lay waste to civilization. Chien Khan is aware that threatening to kill Fu Sheng if he doesn’t help would be a meaningless gesture, so instead he threatens to kill the girl he just had kidnapped should he refuse to cooperate. 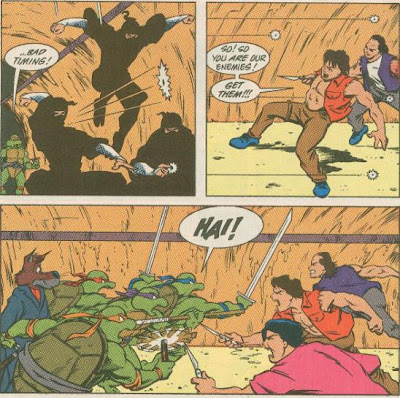 Back in the sewer, Splinter tries to peacefully negotiate his way past the thugs. They say that they have been troubled by ninja, lately, and since the Turtles are dressed like ninja, they must be their enemies. Before Splitner can explain, a horde of Chien Khan’s ninja arrive and attack. The thugs immediately rush the TMNT, who counter the threat as Khan's ninja disappear into the shadows. The Turtles, April and Splinter make short work of the thugs, but were distracted long enough by them to allow the ninja to escape. 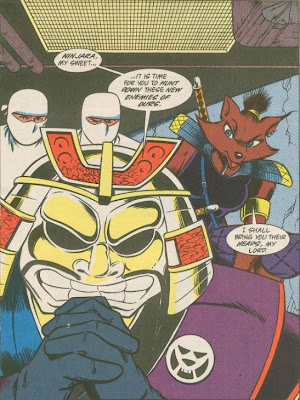 One of the ninja returns to Chien Khan’s base and explains the situation to his master. Chien Khan is prepared to deal with them and turns to his mysterious assistant: Ninjara. Ninjara steps out of the shadows, revealing herself to be a female fox-woman dressed in kunoichi garb. Chien Khan dispatches her to hunt down their enemies and she promises to return with their heads.

*The street thugs from the sewer will return in TMNT Adventures #31.

*This issue was published in the UK by Fleetway in TMHT Adventures #51.

With the “breather” stories finally, mercifully behind us, we can move on to the next story arc of TMNT Adventures. The series really starts to take a turn in atmosphere and plot complexity at around this point. Although Dean Clarrain’s (Steve Murphy’s) eco-preaching never truly goes away, he dials it back a few shades, as it goes from “borderline psychotic” to “mildly irritating”. At any rate, it won’t absorb entire multi-issue narratives for an excruciating length of time again. At least, not for a while, anyway.

I’d like to say that the more dramatic change in tone has to do with the big switch from Ken Mitchroney to Chris Allan as the book’s main artist. Mitchroney’s style was suited more toward fun, goofy adventures while Allan’s is definitely more of an action adventure style (with a hint of cartoonish charm). I like them both for different reasons, but Allan’s style helped elevate the book to a whole new level. And with him entrenched for a good long (uninterrupted) run starting here, TMNT Adventures really begins to take shape.

The “Midnight Sun” arc is a good start toward the more “serious” direction fans like to compliment the book on, though, really, TMNT Adventures never gets half as serious as some fans like to claim it does; always tempering its darker moments with doses of humor and levity (this is a kid’s book, after all). Personally, I find that “Midnight Sun” has the problem of focusing on characters I simply don’t care all that much about. I’ve never been enthralled with Warrior Dragon. I don’t hate him or anything; don’t get me wrong. He just never wowed me as a supporting character.

And then there’s Ninjara. I do hate Ninjara. Created and owned by Steve Murphy and Chris Allan (rather than Mirage or Archie), she just flat out reeks of “Mary Sue” qualities, even before that trope existed. A “hot” fox-woman from a secret race of Japanese ninja fox-people who is, like, a totally awesome fighter and stuff and, oh yeah, she’s Raphael’s girlfriend!1!1 Good god, it’s like Murphy had a time machine but instead of using it to get lotto numbers he used it to cull ideas directly from internet fanfiction. All she amounts to is some furry fangirl’s awful “fursona”. Ninjara’s just a shallow, terminally lame character and I really dislike her.

Unfortunately for me, she isn’t going anywhere. In fact, in time, she’s going to become one of the principle characters of the series and will get as much screentime as any of the Turtles. Damn.

That aside, she really doesn’t do much of anything in this issue, but I just thought I’d lay my feelings on the table since this was her first appearance. The issue itself is plotted nicely (though the sewer thugs don’t seem to notice that they’re talking to giant animals) and I got a legitimate laugh from the “autograph” gag. Allan’s art is shaping up (his Turtles are still caught in a phase between “puffy and cute” and “goofy but dynamic”), though he draws Japanese city streets identical to American ones, which is a tad distracting.

Anyhow, this issue is something of a milestone for the book or at least it represents a turning point. The Dimension X crew from the cartoon are gone (only Shredder will return in the future), the “Captain Planet”-esque finger-wagging is taking a break and the stories are gradually getting more and more daring. Plus, hey, this Chris Allan dude can really draw! On the other hand, it’s a rather uneventful issue with no stand-out moments; the usual “warm up” chapter for any story arc.

Grade: B- (as in, “But how come the sewer thugs also speak English? And fluently? Oh, wait, they were only talking to Splinter, so maybe they were talking in Japanese? And we just didn’t know it? Hell, I dunno…”)