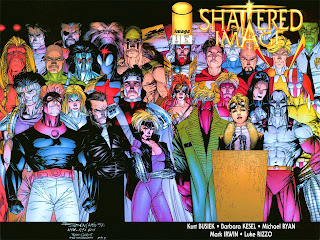 The stupid Image Universe goes into stupid flux and stupid Grifter from the stupid Wild C.A.T.S. crosses over with the TMNT for one stupid panel.

He pops up in their lair while they’re eating popcorn. Says he recognizes them from TV. The Turtles don’t know what the Hell he’s talking about. Leo appears to not even notice Grifter’s presence, instead pointing at his own crotch and sneering awkwardly for no discernable reason while staring off into space.

*This cameo could potentially take place at just about any point in the Turtles’ timeline. But if we were to look at things from the point of view of the Image series, then this would have to take place before TMNT (Vol. 3) #1, as none of the Turtles have been mutilated yet.

*The Turtles will encounter Grifter again (or appear in the same crowd as him) in The Savage Dragon #41.

Hey, look, it’s the one panel the Turtles appear in: 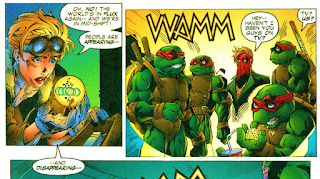 Now you don't have to waste your money on this fucking terrible comic.  You're welcome.

Grade: I will not even dignify this book with a grade.