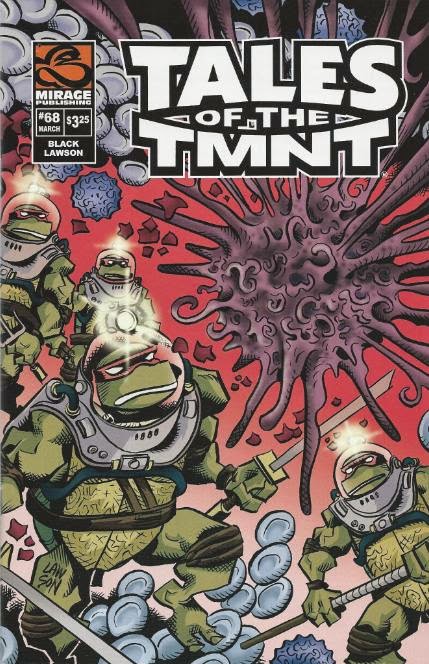 “Heroes in a Half Cell”

Frontispiece: The Turtles, shrunk to microscopic size, stand atop a blood vein as many blood cells float by. Leo remarks on how good chemistry can make or break a team and proceeds to describe exactly what “bad chemistry” is…

At a hospital, Robyn O’Neil is being carted in on a hover stretcher, with a clearly distraught April trailing behind her. An alien doctor takes April aside and tells her the bad news: Robyn has what’s called “alien cancer”. It is a contagious disease accidentally brought to Earth by the Utroms which spreads by touch or inhalation of particles. It causes rapid tumor growth and, so far, has a 100% death rate. The Utroms are working on a cure but not fast enough for Robyn’s sake. April won’t let her sister go, though, and decides to call the Turtles.

At their lair, Mikey’s beating Raph at video games. They get the call from April and rush to the hospital. 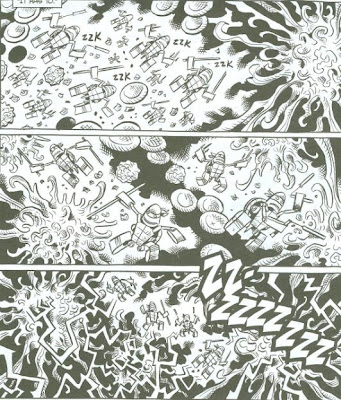 Glurin says that there is another option: the Turtles could shrink down to near-microscopic size and go in themselves. The Turtles agree to the plan and allow Glurin to shrink them. The Turtles are injected into Robyn’s body from four different points and fight their way toward the base of the tumor. 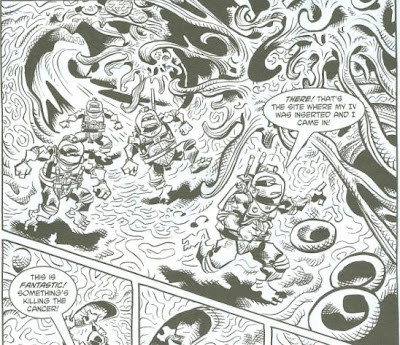 Sadly, all they’re doing is delaying the inevitable, but they are buying the Utroms some time. The Utroms have discovered the source of the cancer: liquid from inside a meteorite. They begin concocting an antivirus from the liquid as the Turtles battle on inside Robyn’s body.

The Turtles eventually meet up at the base of the tumor just as a wash of chemotherapy floods the area. Taking it as a good sign, the Turtles escape through the IV that Leo came in through and to the surface of Robyn’s arm. 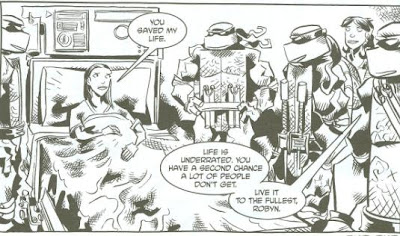 The doctor and the Utroms have some good news: the cure is eliminating the cancer and mass quantities of it are now being manufactured for global distribution. Glurin returns the Turtles to their original size and sometime later, they pay the recovering Robyn a visit. She thanks them for their help and they tell her that she’s family and to enjoy the second chance at life she’s just received.

As Mikey reads a book in April’s living room, Klunk suddenly wakes up. The little kitty jumps out the window, scurries down the side of the apartment building and darts across the street. In an alley, he happens across an angry rat. The two do “battle” and the rat runs away yelping. 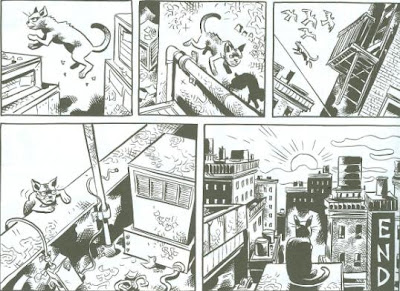 The day saved, Klunk ascends a nearby building and achieves his objective: a perfect spot to view the setting sun.

*The Nanoturtlebots were used to save April from Baxter Stockman’s nanobots in TMNT (Vol. 4) #10.

*It is difficult to place this story in continuity. It could potentially take place between TMNT (Vol. 4) #11 and #12, as none of the Turtles have yet been altered (shrunken Donny, Gameraph, etc.). However, April here is seen with a full head of hair, whereas she was bald following her recovery from Baxter’s nanite disease. Either she’s wearing a wig, or this story takes place sometime after the end of TMNT Volume 4.

*The Utroms promised to help humanity find a cure for cancer in Michelangelo: The Third Kind #1.  They were last shown working on that cure in Tales of the TMNT (Vol. 2) #62.

*“A Klunk Adventure” takes place sometime before Tales of the TMNT (Vol. 2) #9.

*This issue also contained a bonus pin-up, “I Got Yer Back”, by Fernando Leon Gonzalez and Ryan Brown.

“Heroes in a Half Cell” is one of those stories that, without knowledge of all the behind the scenes stuff going on, might seem dull to the average reader. The reality is that author Jake Black fought a very perilous battle against cancer himself, a struggle you and I can only pray we never have to endure, and through fundraising from all the folks at Mirage and donations from numerous Turtle fans, was able to overcome the ordeal.

It’s a heartwarming true life tale and I can only offer Black my congratulations for his recovery and my best wishes for his continued health. As Black’s commentary on his personal life and death struggle, “Heroes in a Half Cell” has some extra heft to it and makes for a rather triumphant, feel-good kind of story.

Now, to look at it objectively, without knowledge of Black’s personal struggle, the tale does seem a bit average. It rushes through at a break-neck pace, as Robyn is diagnosed with cancer and cured in the span of a day (or what feels like mere hours, really). It all goes by so quickly it feels a bit hollow, as the Utroms concoct a magic cure in the span of a few panels to quickly save the day. I dunno, stuff like that tends to bug me in kid’s cartoons, like “The Batman”, where the titular Dark Knight created a cure for vampirism in the span of a few minutes simply by punching some keys into his computer and mixing liquids in a test tube.

Robyn is a character that’s always just been…there. Honestly, I think getting cancer and laying in a hospital bed for 27 pages is the most exciting thing she’s ever done in a TMNT comic. I’m not saying I’d rather it have been Casey or Shadow who was infected by the alien cancer; it was sort of nice to see Robyn utilized to some extent. I’m just remarking on what a dull background character she always ends up being.

Lawson’s art for this issue is…I dunno, probably his usual shtick but it seemed more lifeless than ever. Lawson’s great at dynamic action poses, but the man just can’t manage a sense of depth or exciting “camera angles”, if you know what I mean. The battle against the cancer is just one panel of the TMNT hacking at blobs after another and it all seems so incredibly flat and devoid of energy for what’s going on.

I’m not trying to disparage the story or its author. Taken as is, “Heroes in a Half Cell” (great title, by the way) isn’t a bad issue by any stretch, but it isn’t especially memorable. I’m very happy for Black and as a commentary on his own personal struggle the tale has an extra smidgen of emotional depth to it. But that aside, it doesn’t particularly stand out.

“A Klunk Adventure” was a cute little back-up done in pantomime. I’m always up for more Klunk. Though Lawson, please, you don’t have to draw the cat’s butthole. Or the rat’s butthole. In fact, stop drawing buttholes period.

Grade (“Heroes in a Half Cell”): B- (as in, “Betcha Robyn makes the most of her new lease on life by disappearing into the background again as that ‘April has a sister? Oh yeah, she DOES have a sister’ character she's always been”.)