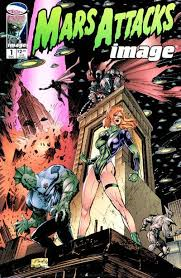 Remember that shitty movie from the '90s where Jack Nicholson and Tom Jones and Pierce Brosnan fought a bunch of really bad-looking CG aliens from Mars?

As a Martian invades an alley in New York, he fires a laser at a dog. Raph plummets down from the rooftop to stop him. He doesn’t make it even remotely on time and the dog gets shot to death.

*This cameo could conceivably take place just about anywhere in the Turtles' timeline, but looking at it from the point of view of the Image series, it should take place before TMNT (Vol. 3) #1, since Raph isn't disfigured.

Well, it’s good to know that Image got their mileage out of the TMNT during their short tenure with the company. 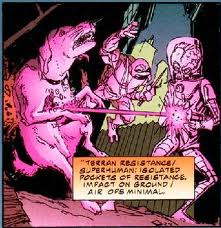 Grade: K (as in, “Keith Giffen must have needed to pay some serious bills”.)