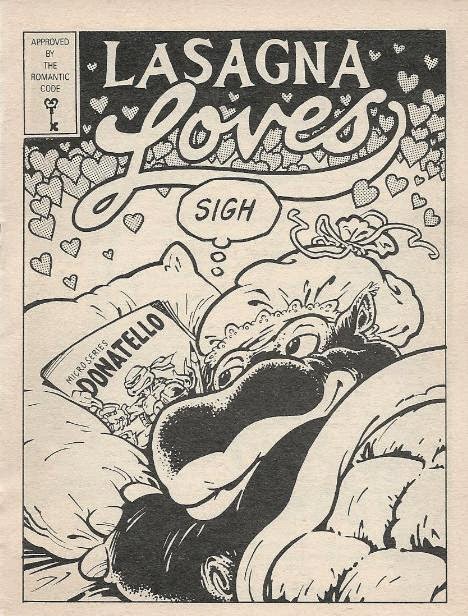 “Lasagna Loves in My Dinner with Don”

At her place, Don sits coyly on the couch as Lasagna sprays binaca into her mouth, pondering how lucky she is to be with “the world’s most eligible turtle”. She takes a seat next to Don and attempts to make some small talk as Don remains motionless with a smirk of satisfaction on his face. Fed up with the small talk, she attempts to plant a kiss on Don. 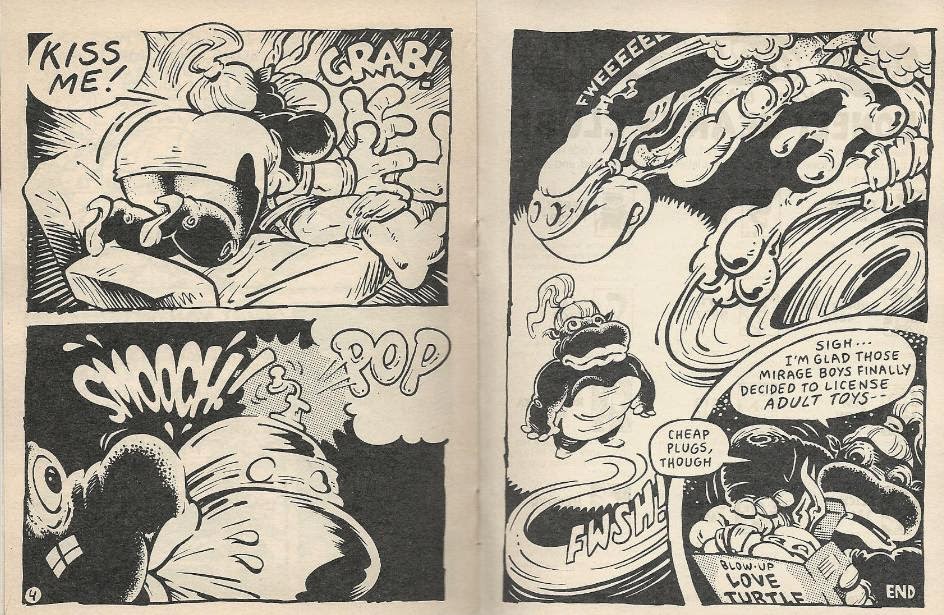 However, her embrace causes the plug on his head to pop and the inflatable Donatello love toy deflates back into a pile of plastic. As Lasagna stuffs the Don “blow-up love turtle” back into his box, she remarks how happy she is that Mirage has begun licensing “adult toys”, but thinks the plugs are too cheap.

*Lasagna Lagna previously appeared in TMNT (Vol. 1) #23. Beyond her TMNT cameos, she has appeared in Martin's "Gnatrat" series.

*On the cover page, Lasagna is curled up with a copy of Donatello (microseries) #1.

I am not a big fan of Mark Martin’s work on TMNT. Michael Zulli’s “Soul’s Winter” trilogy aside, I wasn’t a fan of any of the issues within the TMNT Volume 1 “guest era”, particularly the goofy comedy relief stories that droned on for three miserable issues (I’m lookin’ at you, Hedden and McWeeney!). I mean, I enjoyed TMNT #16 quite a bit, but the sequels just took a good idea and wrung it dry.

However, unlike the “Time and Time Again” trilogy, Martin’s “Lasagna Loves” story only lasts a merciful eight pages, and that includes the cover and two pages dedicated to a goofy letters column and some singles ads. Condensed to just five story pages, the joke doesn’t overstay its welcome and has an amusing punchline at the end with the blow-up doll. Still, you know, I can’t say I really laughed.

To go on a tangent, I think the most entertaining thing about this story is that Lasagna seems to accurately encapsulate the worst elements of the fangirl portion of the Turtles community, and a decade or more before Fanfiction.net and DeviantArt gave them the most wretched outlet imaginable for their hideous obsessions. Having actively participated in the online Turtles fandom for more years than I feel comfortable admitting, I can’t tell you how frequently I’ve felt the overpowering urge to “choke a bitch” when they start going on about how in love they are with Don or Raph as though they were real people. So it was sort of gratifying to see Martin take a jab at unkempt, socially retarded Turtle fangirls that are “saving themselves” for their beloved fictional animals.

And no, I’m not saying that all female Turtle fans are like that. The ones I’m so venomously referring to, well, you know who you are.

Grade: D+ (as in, “Donatello, being a computer nerd, was probably going to end up with an obnoxious fat chick anyway”.)
Posted by TMNT Entity at 12:11 PM