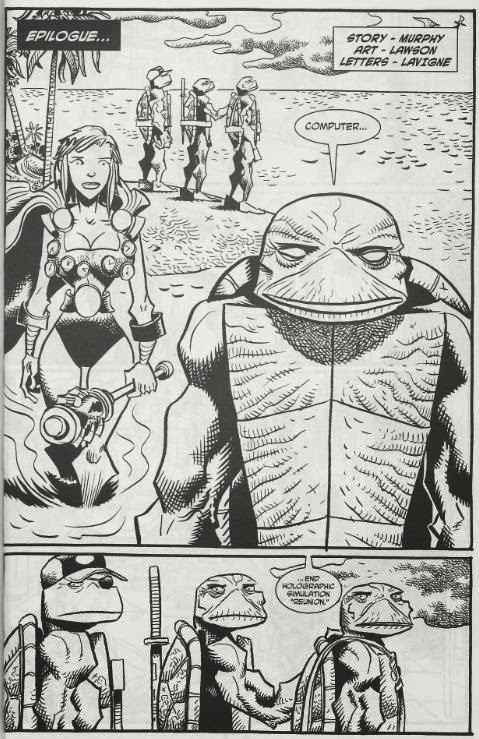 Sitting in his study, an elderly Donatello pours over some old scrapbooks and journals of their adventures past. He recalls the winter of 1987, shortly after they were exiled to Northampton by the Shredder. Don remembers the growth of Casey Jones with amusement and specifically recalls the first adventure they had after escaping to his farmhouse…

Sitting on a rooftop overlooking Springfield, Massachusetts, old Don reflects on how all cities are different, remarking on Springfield’s economic heyday and then steady decline. Although some people wrote Springfield off as a hopeless cause, Don thinks back to one individual who refused to give up…

Halloween night, and the geriatric Don and Leo are visiting the grave of their departed friend, Casey Jones. Don tells Leo he remembers their battle against a magical idol in Manhattan. Leo recalls it well, as Klunk was still alive and all four Turtles still lived together as a family. As they recall the tale further, the zombified hands of Casey Jones sprout out of the ground…

Down in the sewers, the elderly Don, Leo and Mikey are prowling around. Mikey suddenly begins to speak about monsters, how belief in them has shaped human society, although one ponders where they truly originate from. Don compliments Mikey on his way with words, as dozens of rats and a silhouetted Frankenstein monster lurk in the background…

In a lab somewhere, all four geriatric Turtles are looking upon a stasis tube imprisoning a slumbering Complete Carnage. Don recalls how none of the Turtles used to believe superheroes actually existed, at least until they encountered one themselves…

While fishing in an alligator-infested swamp, Mikey remarks to his brothers that he recalls the old legend of a giant alligator that lurked in the sewers of New York. A giant alligator named Leatherhead…

Renet looks on as the four elderly Turtles, back in the prehistoric age, ride atop a triceratops. One-eyed Raph reflects on how cool dinosaurs are and ponders what could have caused their extinction. He then casts the musings aside and gets ready to tell a tale of “prehistoric pandemonium”…


Still in the prehistoric age, the blind, elderly Don walks away from his three brothers and Renet, who look on him in silence. Don orders his computer to end the holographic simulation titled “Reunion”. His brothers vanish, though Renet does not, as Don returns to the sterile confines of his lab. 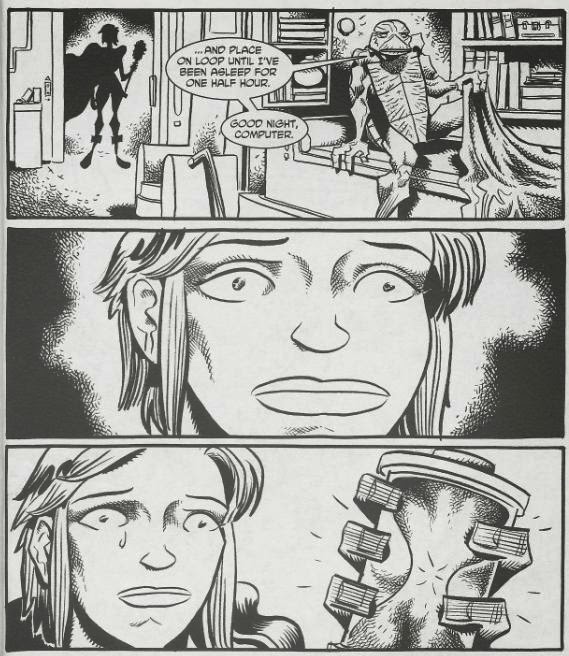 Feeling his way to his bedroom with his walking stick, Don orders his computer to ready his chamber for sleep by playing John Coltrane’s “My Favorite Things” album. As Don solemnly climbs into bed, completely unaware of Renet’s presence, the Timestress begins to weep. Renet then activates her time scepter and vanishes. 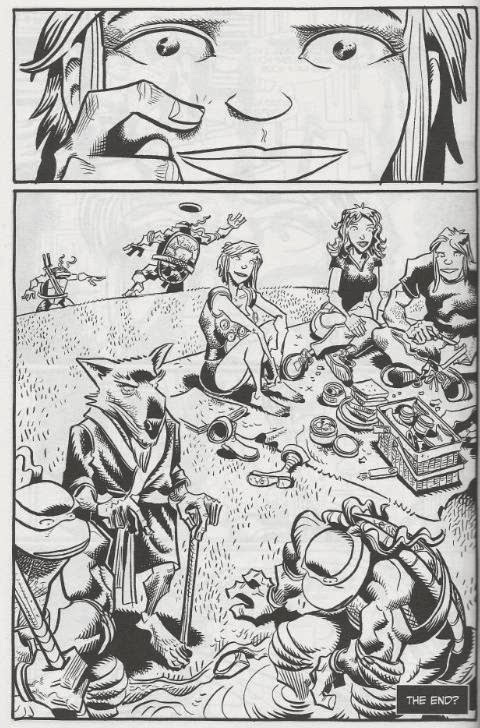 Wiping the tear from her cheek, she reappears in a “better time”, joining all four Turtles, Splinter, Casey and April for a picnic.

*These frontispieces were produced exclusively for the 2007 trade paperback collection of Tales of the TMNT (Vol. 1), replacing the original frontispieces.

*Elderly Don was previously seen interacting with his hologram computer “Chet” in the story “Old Times”, published in Plastron Café #1.

*It is implied in Tales of the TMNT (Vol. 2) #69 that Don’s blindness may have been the result of an altercation with Shadow Jones, which subsequently acted as the catalyst for the Turtles breaking up.

*Raph is seen wearing his eye-patch, having lost his eye in Tales of the TMNT (Vol. 2) #69 during a fight with Shadow Jones.

*Leo is seen carrying his cybernetic katana, a gift given to him for his 100th birthday by Don, as mentioned in Tales of the TMNT (Vol. 2) #14.

*Don compliments Mikey’s way with words. Mikey was shown taking an interest in writing in TMNT (Vol. 1) #17, and was shown pursuing that interest as a potential career choice in TMNT (Vol. 3) #6 and throughout the rest of that volume.

While I always enjoyed the original frontispieces as published in the issues of Tales (Vol. 1), and I think they’re a bit better drawn as they were produced before Lawson modified his art style, the story in these new frontispieces really brought something new and special to the table.

Murphy does an excellent job stitching together various disparate tidbits of the mysterious “future era” of the Mirage Turtles, in some ways making things more mysterious while also making things more coherent, too. The overall callback to “Old Times” was a nice touch, as was throwing in visual references such as Leo’s cybernetic katana from “Loops” and Raph’s eye-patch from “Choices” (and his other future era appearances).

But Murphy’s script goes much deeper than that, with the Turtles in their limited dialogue actually feeling like they’ve matured and grown as they speak. This is reflected best in Mikey, seen as the burgeoning author in the past, now an old man and speaking with excellent vocabulary and alliteration, as one would expect someone who’s spent a lifetime crafting literature to speak. And yet he still “feels” like Mikey, as he uses those oratory skills to ramble on about monsters and spooks.

The biggest hit, though, came in the epilogue, which sort of comes and strikes you out of the blue. You see, you aren’t supposed to take the frontispieces seen in either Tales of the TMNT volume seriously. They’re often very goofy or surreal pin-ups featuring the Turtles in Hell fighting Dracula or running around the Planet of the Apes; a bizarre visual to grab the reader while otherwise being meaningless to any actual narrative continuity. The frontispieces here continue that tradition, as the Turtles watch zombie-Casey rise from his grave or loaf about the sewers with a Frankenstein monster. The overarching theme of the Turtles being elderly is a tad suspicious, but you don’t really give it too much thought.

Then the epilogue comes along, showing us that the “weirdness” was just a hologram program and shit gets depressing. The sight of a blind, elderly Don feeling his way around his home, completely oblivious to Renet’s presence, remembering the better times when he still had his family, it’s... well… it’s pretty sad. The implication I took away from it was that this was Don’s death; that after going to bed, he never woke up again. Perhaps he was the last Turtle left? Who knows. Perhaps he died without ever reconciling with his estranged brothers? Who knows.

Without even a single word of dialogue, Renet also really shines in the epilogue. Stories like this and “Dark Shadows” do an excellent job of showing us the burden of Renet’s employment as a timestress. I mean, how would you feel if you knew exactly how all of your friends and loved ones were going to die? The image of Renet, helplessly standing by as the light flickers out on Don’s life, then “escaping” to a better time when they were all youthful, happy and together really puts the “bitter-sweet” stamp on this thing.

So far as chronology goes, I like to place this at the very end of the Turtles lives; the concluding image of the entire Mirage universe. Like all things, the Turtles will pass away in time, but the memories of their brighter days will always be there.

Grade: A (as in, “At least Don didn’t get shipped off to a retirement home”.)