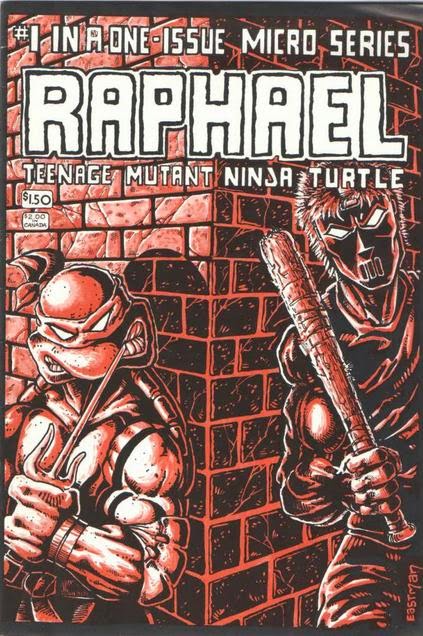 In the cellar of April’s building, Raph and Mike are having a “friendly” sparring match. But as Mike continues to best Raph, the angriest Turtle begins to lose his temper. Enraged over losing the match and out of control, Raph grabs a monkey wrench and attempts to brain Mike with it. Don and Leo stop him and Leo orders the hothead out of the building. Raph, shaken and upset over what he almost did, laments his behavior from the rooftops. He realizes that even though he's upset over Splinter's disappearance, he has no excuse for his actions. 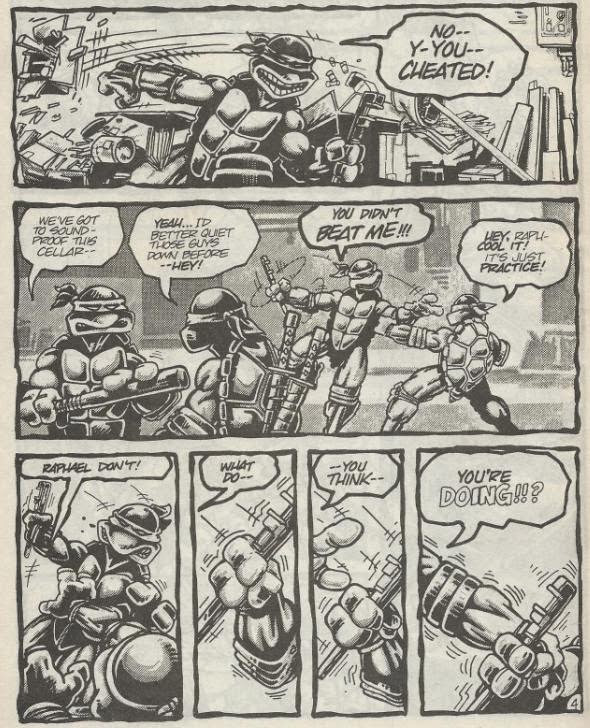 In a squalid apartment, a young man is lifting weights and digesting a diet of Clint Eastwood and Charles Bronson movies. Deciding that cleaning up the foul streets of New York is his job, “Casey Jones” grabs a golf bag full of gear and a hockey mask and gets to work. 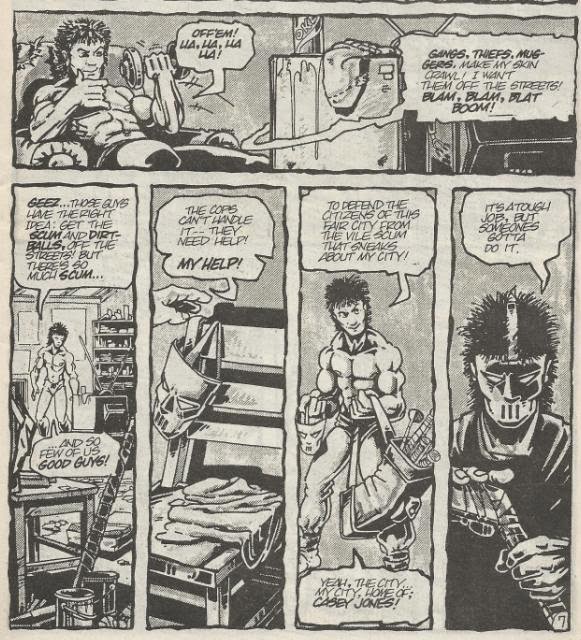 By happenstance, Casey and Raph both happen to notice the same mugging occurring at the same time. Before Casey can swoop in, Raph gets to the muggers first, rather harmlessly knocking them into retreat. Casey is impressed, but decides to “finish the job” himself. Casey cuts the fleeing muggers off and begins beating them relentlessly with his baseball bats. Raph sees this and decides to stop Casey before he makes the same mistake he almost did. Casey doesn’t cotton to being stopped, though, and goes toe to toe with Raphael. Raph knocks Jones to the ground, but the vigilante gets the upper hand by nailing the Turtle in the face with his golf club. Casey vanishes, leaving Raph to hunt him down. 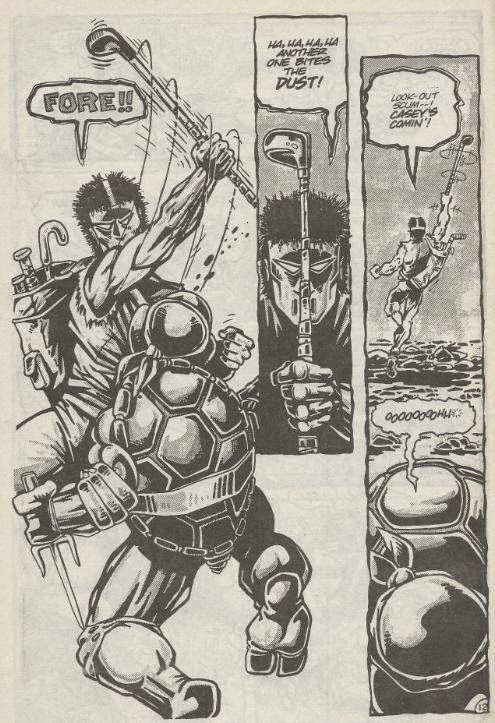 At a used car dealership, Casey stumbles upon a pair of carjackers. He bashes one in the face with his bat and then breaks the leg of the other. Casey’s not through, though, and prepares to continue dishing out the punishment to the immobilized criminals. Raph follows the trail of screams and initiates Round Two with Casey. After another duel, Casey again takes Raph by surprise and slips away, this time into a crowded street outside Central Park. Raph is hesitant about running out into such a busy street, as it goes against everything Splinter taught him, but decides “screw it” and runs across the street after Casey anyway.

Inside Central Park, Raph is having a hard time tracking Casey down. Casey, hiding in the bushes, gets the drop on him and so begins Round Three. Raph does better this time around, blocking Casey’s bat attacks with his plastron. Casey decides that Raph is just too tough and attempts to slip away again. Raph ain’t havin’ dat, and catches Jones, beating him to the ground. 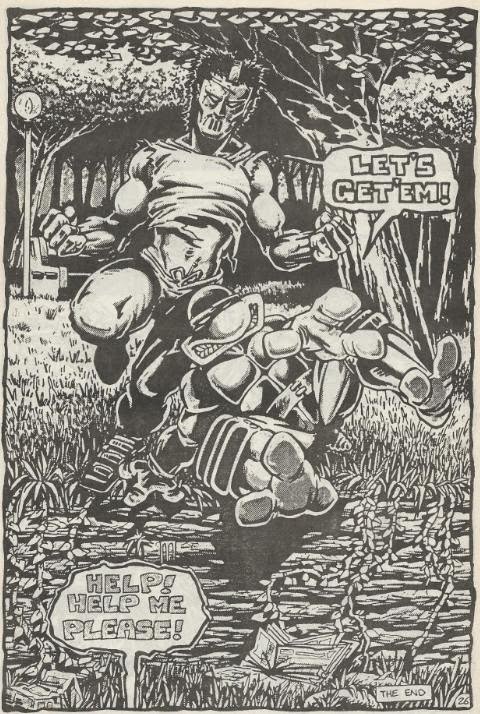 Casey admits defeat and finally concedes to talking his issues out with Raph. Raph condones his drive for justice, but levels with him that carjackers don’t deserve capital punishment. Before their philosophical debate can conclude, they overhear another mugging. Casey invites Raph to help him in his crusade and Raph accepts, if only to keep his eye on the nutball.

*The 1st printing of this issue contains a back cover pin-up by Eastman and Laird, and an inside back cover pin-up titled "Four Turtle Assault" by Chris Ecker. Among the house ads, there is also a bonus pin-up of "the very first drawing" of all 4 Ninja Turtles by Eastman and Laird, originally done in 1983. The letters page (on the inside front cover) also features fan mail from some familiar names: Stephen Bissette, Stan Sakai, and Steve Gerber!
*The 2nd printing of this issue (November, 1987) contained a new cover by Kevin Eastman and a bonus story, “Fun With Guns”.

*This issue was eventually colorized (by Justin Norman) and reprinted in the “TMNT 25th: A Quarter Century Celebration” trade paperback.

*The back-up strip "Conflict Resolution" shows what happens after Raph and Casey run off after the purse-snatchers at the end of this issue.

*Raph and Casey will continue to have bromantic adventures in stories like “Complete Carnage an’ Radical”, “Fun With Guns” and the “Bodycount” miniseries, though Casey’s big “return” will be in TMNT (Vol. 1) #10.

*A poster for Frank Miller’s “Ronin” can be seen in Casey’s apartment.

*Perhaps unflatteringly, the muggers that attack the woman at the start of the issue are modeled after Eastman and Laird. These caricatured characters will appear again in TMNT (Vol. 4) #11.

“Me, Myself and I” is one of my favorite stories from the early issues of TMNT (Vol. 1), and a welcomed distraction from all the space aliens, robots and mad scientists that dominated the first six or so issues of the series. Though devoid of evil ninja adversaries, it’s a nice throwback to the atmosphere of the first issue of the series, reeling the characters back to their gritty, street level roots and away from the sci-fi antics that had begun devouring the plot.

Kevin Eastman is a self-admitted Frank Miller fanboy and that affection tends to show through in a lot of his stories. “Me, Myself and I”, however, doesn’t push the grittiness to the same extent that stories like “Fun With Guns” and “Bodycount” tend to, forgoing the guns, gore, nudity and bad language for a simple street-level running brawl between two very ill-tempered gentlemen.

Although it does feature Peter Laird gropin' himself some perky nipples: 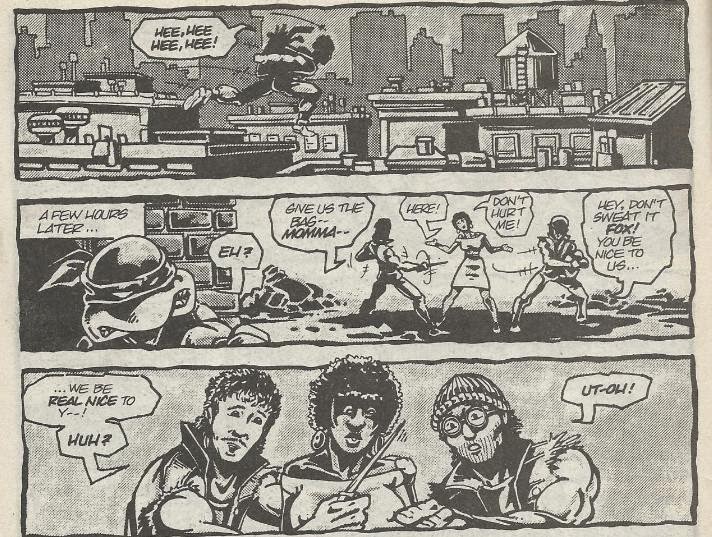 This was one of the first issues of the first volume (I include the character-based microseries as issues of the first volume and TMNT.com seems to encourage that attitude) to really start fleshing out the individual characteristics of the Turtles, giving them unique personalities. While TMNT (Vol. 1) #2 rather awkwardly revealed that Don just happens to be a computer genius when it was convenient to the plot, Raphael #1 actually builds upon the scant scraps of Raph’s personality that’d been dropped since TMNT (Vol. 1) #1, making the big focus on his character feel more natural.

Raph as the “loose cannon hothead” of the team is one of those things you either love or hate, I guess, though I don’t often encounter many people who hate it. If I were to have any complaints about Raph’s character, it’s more that he never grows out of his “rebellious” phase and remains the same stagnant, uncontrollable, angry individual at the end of the timeline that he was at the beginning. While one can argue that character stagnation is common place in the world of comics, I sort of expect something better from TMNT, which parades itself about as an “indy comic” and thus shouldn’t be prone to Wolverine-esque levels of character stagnation.

But be that as it may, if Raph has anything going for him, it’s that his attitude never makes him as boring as Leo or Don, or as obnoxious as Mikey. Just don’t expect him to ever mellow out or develop, grow and change in any meaningful capacity over the course of the series. He’s gonna be a sour little volcanic prick for the rest of his life.

But hey! Casey Jones! My favorite character! Sweet. One of the things I adore about this story is that Casey is presented as a near-equal to Raph in terms of fighting prowess, which by extension means he could hold his own with the rest of the Turtles and their enemies (and proceeds to do so, as you’ll see in TMNT #10). While Raph and the Turtles all stick to a rigid martial arts discipline, Casey’s nothing but pure, gritty street fighting style. No fancy ballet maneuvers, splits or namby-pampy flipping around; he’s just a brutal pugilist through and through. In a world of media where Oriental martial arts are considered the peak of fighting style, it’s nice to see a straight up crazy boxer show the skill to take a ninja to task.

Regrettably, Casey doesn’t stay this way forever. His skill level will tend to fluctuate over the course of the series depending on the author, to the point where he just can’t keep up with the Turtles any longer. While the comics tended to just depict this as “out of his depth”, other media (like the 4Kids cartoon) will take it to an extreme and reduce him to bumbling comic relief (one of the only things I really, truly despised about the early seasons of the 4Kids show). In these early issues, though, Casey is an unpredictable, manic ball of rage and energy that can keep up with the Turtles and give them a run for their money if he has to. I think I prefer this era of Casey’s characterization over any other.

Artwise, this story looks to have been penciled primarily by Eastman. Either that, or Laird did a good job of mimicking Eastman’s style for multiple pages (while both artists were pretty harmonious when working together, they still had unique quarks to their Turtles that stand out). But ignoring credit for who drew what, the action in this issue is staged exceptionally well, with each blow having a considerable amount of impact in its execution. The inking/toning seems a tad muddier than the surrounding issues of TMNT, but I’ll just chalk that up to the nighttime setting and the overall Frank Millerness of the thing.

Storywise, it’s just a running battle between two lunatics, but there’s some pathos in there. Raph learns a lesson about controlling his anger early in the story and then gets to put that lesson to practice when he encounters his own five-fingered doppelganger. While that aspect was played up in the 4Kids adaptation of the story, “Meet Casey Jones”, Raph’s determination to teach Casey the same lesson that he learned isn’t so much at the forefront, with Raph more preoccupied with the fear that Casey’s gonna straight-up murder somebody.

Anyway, I guess I’ve yammered on long enough. Raphael #1 just happens to be one of the highlights of the first dozen or so issues of Volume 1 and one of my favorite TMNT stories, to boot. It also helps that it introduces my favorite character in the series.