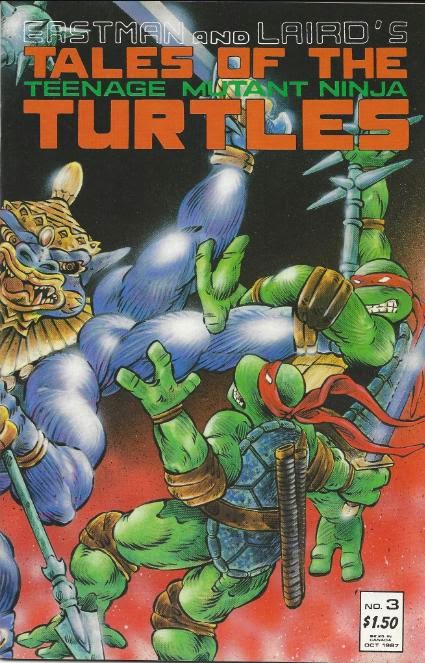 Frontispiece: At the grave of Edgar Allen Poe, one of the Turtles declares how Halloween always reminds him of the time he lived in New York City with April and of their encounter with a pair of thieves and an idol…

On a plane approaching Kennedy Airport in New York, a tall mustached man and a short, fat man named Hadji discuss their plans to steal an idol from the Second Time Around store. After swiping the Captain’s wristwatch, the mustached man tells his assistant that they need to begin recruiting “help” from the local degenerate crowd.

At the Second Time Around shop, the mustached man asks April if she has anything grotesque to fill a mantle space. She shows him a six-armed idol from India, exactly what he was looking for, though he declines to purchase it and leaves.

Later, Halloween night, the Turtles are up in April’s apartment above the store, carving jack-o-lanterns and preparing for the one night out of the year they can be seen in public. Suddenly, the store alarm goes off and, thinking it was just Klunk tripping it again, Mikey heads downstairs. Once there, he encounters a trio of masked thieves purloining the idol. He takes out one of them while the others topple a bookshelf on his shell and make off with the goods. Mikey’s brothers come down and help him up. They interrogate the remaining thief, who appears to be under a trance. He wheezes out that the idol has been taken to the Blue Star Hotel before some unseen force kills him. The Turtles decide to pay the hotel a visit.

At the hotel, the two henchmen give the “Thieving God Idol” to Hadji and the mustached man, who declares himself the "King of Thieves". The two henchmen then die a similar death as the one left behind, leaving the King of Thieves to explain to Hadji that he gave the hired help a slow-acting poison before they left so as not to allow any witnesses to survive. 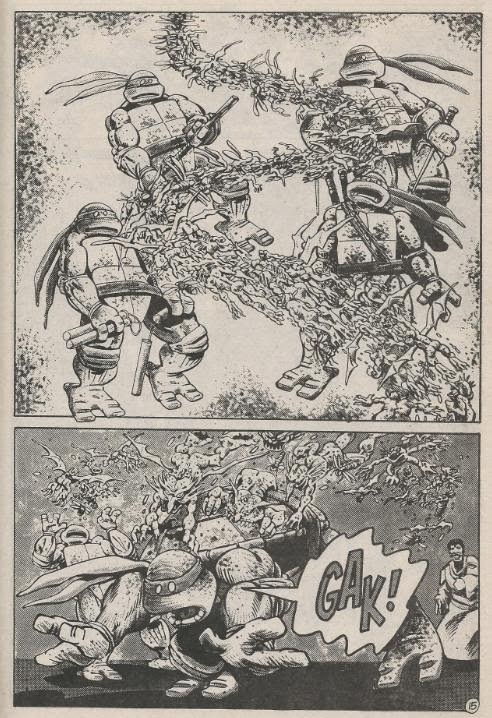 As the King of Thieves and Hadji escape, the demons then fly out the window and the Turtles follow them into the streets, where the little devils are tormenting the people of New York. The Turtles catch up to the King of Thieves, who casts another spell, this time bringing the Thieving God Idol to life (and growing it ten feet tall). The Turtles attack the Idol one at a time, but it disarms each of them and swats them away. Thinking of a strategy, Leo tells the Turtles to lure the Idol onto the nearest roof.

As they lead it away, the King of Thieves explains to Hadji that the Thieving God Idol was used by his ancestor, the original King of Thieves and by all the greatest thieves in history, who used the tiny demons to penetrate solid walls and security systems to do their nefarious bidding. 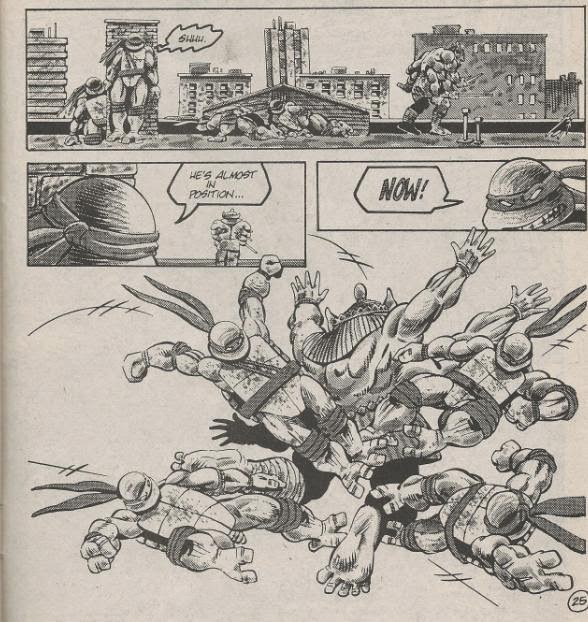 The Turtles make it to the roof and Don realizes that the Thieving God Idol still has the weapons that it stole. He tells the other Turtles to take whatever else they’ve got and set it by the ledge. They hide as the Idol arrives on the roof, spots the weapons and heads greedily over to the ledge. The Turtles rush it all at once and send the Idol falling to the street below. The Idol falls straight through the pavement and into a power line, where it explodes. 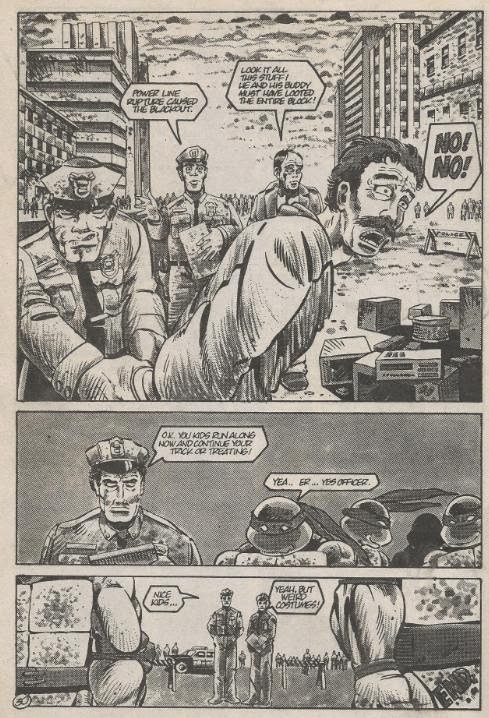 When the Turtles reach the street, they find the little demons fading out of reality. Don spots the King of Thieves and Hadji making their escape, finds his staff and hurls it at them. The thieves trip and fall right into police custody, where they’re charged with all the looting. The police tell the Turtles that they can run along and finish their trick or treating (though they remark that those “kids” have the weirdest “costumes”).

*The Thieving God Idol will find its way into Mikey’s junk closet, as seen in Tales of the TMNT (Vol. 2) #62.

*The Turtles will encounter the King of Thieves and Hadji again many years later in Tales of the TMNT (Vol. 2) #39.

*"Dooney’s Yogurt Bar” is located next door to the Second Time Around shop. It is named after Turtles artist Michael Dooney.

*The King of Thieves's chant of "Mecca Lecca Hi Mecca Heinie Heinie--" is taken from Pee Wee's Playhouse. Due to the supposedly offensive translation of that chant, IDW placed a content disclaimer on the inside cover of their 2012 Tales of the TMNT Vol. 1 trade paperback collection, warning readers of the insensitive material. Various internet sites for years have maintained that the chant means to commit sodomy while facing Mecca. I have no clue if that translation is accurate or just an urban legend, but IDW apparently saw fit to play it safe and apologize in advance.

*This issue also contained a bonus pin-up by Peter Laird and Ryan Brown.

This is a fun if very light issue that feels more appropriate as an episode of the cartoon series (either one) if anything else. Not that that’s an inherently bad quality, just that it seems to hit a lot of typical Saturday morning cartoon “done in 22 minutes” plot beats. A paper-thin villain shows up, creates a monster, the Turtles beat it in a rather predictable fashion and the police haul the badguy off to jail as he screams indignities. It even ends on a cute gag. There’s no story credit listed, though the opening editorial by Jim Lawson explains it was Ryan Brown’s brainchild with some pointers from Kevin Eastman.

On the subject of cartoon-friendly plots, “All Hallow’s Thieves” actually made the transition to an episode of the 4Kids series pretty seamlessly (albeit omitting the deaths of the henchmen). Very little was lost in the transition, though that’s not exactly remarkable, as this was a pretty thin story to begin with. Couldn’t stand the King of Thieves’s accent, either. The Hell was that, anyway? British? Australian?

Anyhow, in the opening editorial by Jim Lawson, the artist explains that beginning with this issue, he and Ryan Brown began developing a newer art style than seen in the previous two issues. In regards to the pencils, I thought they looked very good; both the Turtles and the humans. Of Lawson’s many fluctuating styles over the years, I really think the style seen here in the first volume of Tales of the TMNT is his most palatable. No one is a blocky monstrosity, facial expressions are detailed and the duotones and inking really give the art some welcomed substance. I especially like the sly smiles the Turtles share on that last page.

Ryan Brown being the notorious metalhead that he is, the issue is littered with graffiti references to bands like Metallica and Testament and, appropriately enough, Samhain. There’s also a poster in the Second Time Around shop for REM. Huh. One of these things is not like the others.

“All Hallow’s Thieves” amounts to a rather light story but with some of Lawson’s best art to move it along. Awesome frontispiece, too.

Grade: C+ (as in, “Cor bloymey, mate, throw anotha shrimp on the barbie ya bloody drongo ‘n steal me a thievin’ gawd idowl, guv’nah, wot wot! …Seriously, he talks like that in the cartoon. The HELL?”)