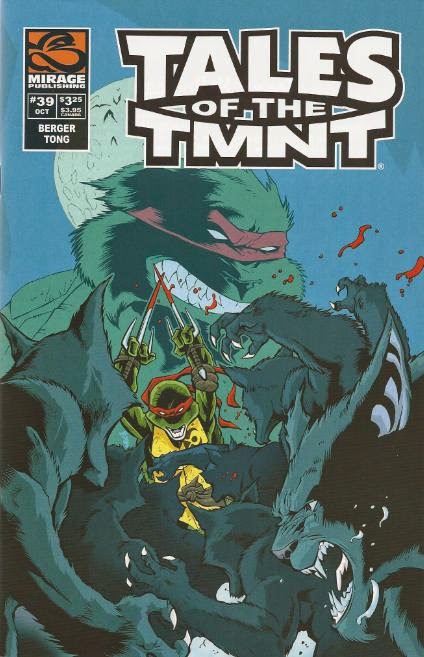 Frontispiece: Leo considers how Halloween was once a serious holiday but is now considered the domain of children. Li’l Shadow, dressed as a witch, says she thinks trick or treating is fun as Leo carries her over a bunch of squirming tentacles.

It is Halloween night and from a rooftop, a grumpy Raphael ponders how all the children down on the ground love to dress up as aliens and monsters, but the moment they meet a real alien or mutant, they freak out. Mikey (both he and Raph are wearing their Utrom identification badges) asks Raph if he wants to go trick or treating and Raph goes off on him, explaining that they might as well go as humans, specifically the Madhattan Maulitia, and blow up some Utrom bases.

Brushing Mikey off and walking away, Raph spots what looks like Renet going into the sewers. Feeling something is fishy, Raph gives chase. He follows “Renet” into their sewer lair, where “she” dismantles the security and begins rifling through their closet of stuff. Raph decides enough is enough and spins “Renet” around, only to find that it’s a skeleton in disguise. The skeleton is after the Thieving God Idol and Raph isn’t about to let it go. The skeleton lunges for the idol and then explodes in a flash of light when Raph stabs it. 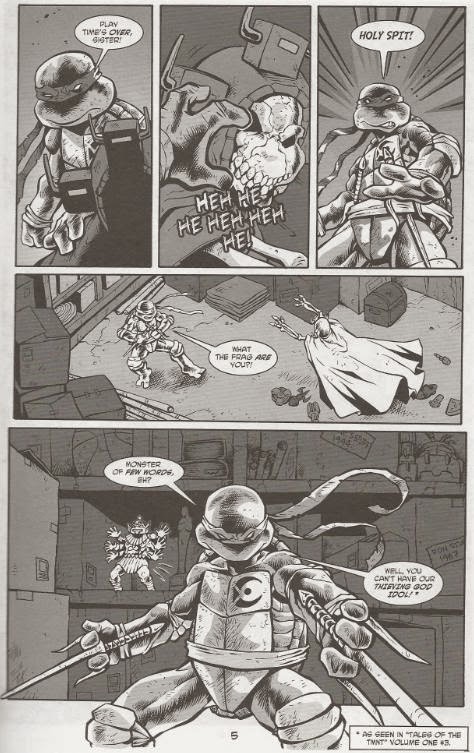 Suddenly, Raph finds himself in a strange dystopian version of Central Park. Raph is immediately confronted by an old enemy, the King of Thieves, who orders his army of werewolves to attack Raph and not let him escape like his “brother” had. As Raph fights for his life, the skeleton delivers the Thieving God Idol to the King of Thieves. Raph is overwhelmed, but before he can be shredded, a tricked-out Hummer roars onto the scene and a mysterious driver orders Raph to get in. Raph reluctantly complies and escapes.

Later, Raph makes camp with his savior, an emaciated and badly scarred Indian named Hadji. Hadji explains that he was once the servant of the King of Thieves, but after a betrayal, became his enemy. Raph says he vaguely remembers Hadji from before, though he was fatter when last they met and not all torn up. Hadji explains that the King of Thieves is the one who harmed him. He then goes on to say that Raph is currently stuck in one of his “potential futures”, one where monsters have taken over New York. 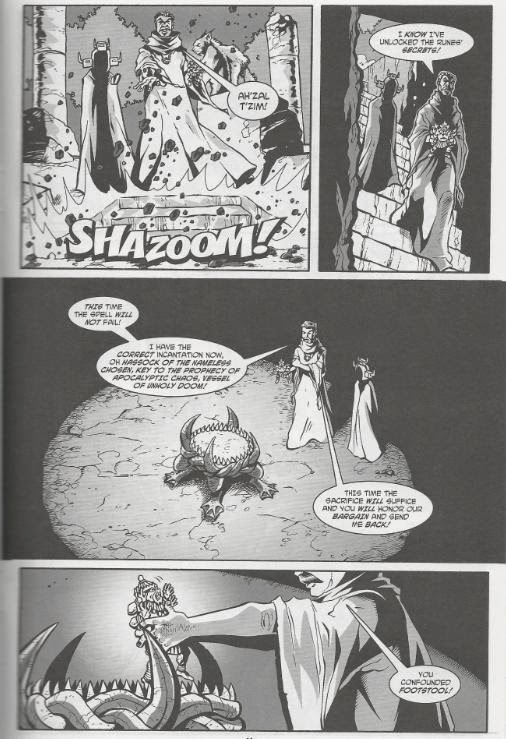 Back at Central Park, the King of Thieves carries the idol to a subterranean lair, declaring that now that he knows the proper incantation, his supernatural benefactor, Hassock of the Nameless Chosen, will finally be forced to honor their bargain. Bitterly, he places the Idol on a toothy “footstool”.

At the camp, Hadji begins to explain where they found the Hassock when Raph asks for the slimmed down version of the tale. Hadji says that they made a deal with the Hassock to control the present, but failed and as punishment were banished to the Hellish future they’re stuck in now. Their only means back was a “great sacrifice”, but no amount of bodies fed to the Hassock would satiate it. The King of Thieves gained control over the werewolf population and, eventually, found the Thieving God Idol buried in the remains of the Turtles' old sewer lair. He attempted to feed it to the Hassock, but spoke the incantation incorrectly, destroying the Idol and not satisfying the creature. He eventually obtained the proper spell, but needed the idol. Thus, he sent his Folcrum (the skeleton dude) back in time.

At the sorcerer’s lair, the King of Thieves attempts to ignore the mocking words of the Hassock as he chants the incantation.

And back at camp, Hadji tells Raph that the Folcrum is the source of the spell that binds him to the future, and once destroyed, he will be returned to the past. Raph asks what went down between Hadji and the King of Thieves and Hadji grimly explains that they had sacrificed many humans to the Hassock and, eventually, three Mutant Turtles: Don, Leo and even Raph. Following that, the King of Thieves used Hadji’s aura to create the Folcrum spell and Michelangelo saved his life, thus binding Hadji to servitude to the Turtles. Mikey was eventually ambushed by werewolves and hasn’t been seen since. Hadji then reveals the King of Thieves’s big plan: to merge this horrible future with Raph’s present, defeat the vampires who contend with him for control and eventually rule over the amalgamation as the King of Werewolves. 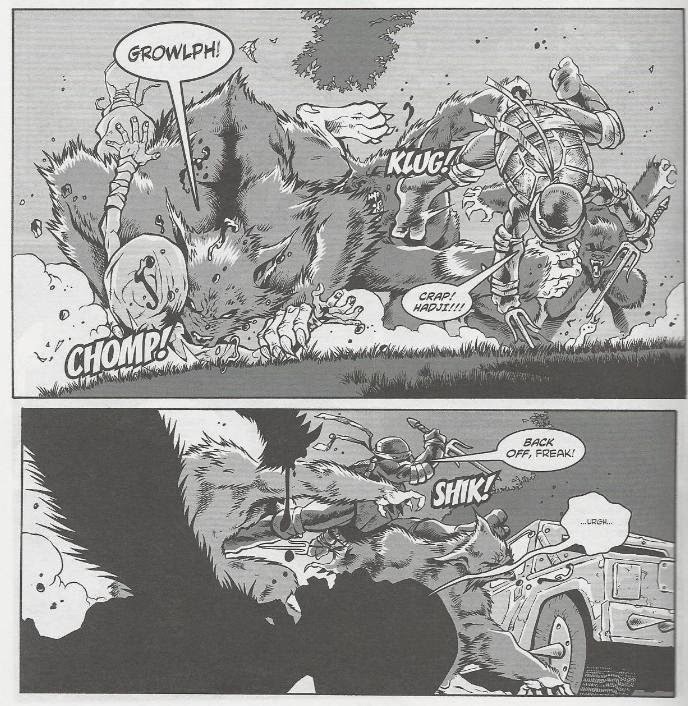 Suddenly, the werewolves attack and begin mauling Hadji. Raph attempts to save him, but is quickly overwhelmed. Then, a howl fills the air and the werewolves are drawn away to fight a strange, shadowy figure. Raph escapes and decides to take the fight straight to the King of Thieves. Raph sneaks into the sorcerer’s lair and discovers the Folcrum was, in fact, the skeleton of his future self! The King of Thieves explains that the Hassock has cursed him and he cannot escape the Hellish future until he has appeased its appetite. He then magically levitates Raph over the Hassock and prepares to sacrifice him for the Hell of it.

Then, the mysterious figure arrives: Were-Mikey! Interrupting the chant, the Hassock destroys the Thieving God Idol and Raph is set free. Enraged, the King of Thieves sets Were-Mikey on fire, killing him. Realizing he’s in over his head, Raph decapitates the Folcrum and sends himself back to the present. Coming-to on the rooftop, Mikey approaches him and says that even though he brushed off trick or treating earlier, he got him some Junior Mints, anyway. Brimming with joy, Raph gives Mikey a hug and devours the candy. Mikey is confused. 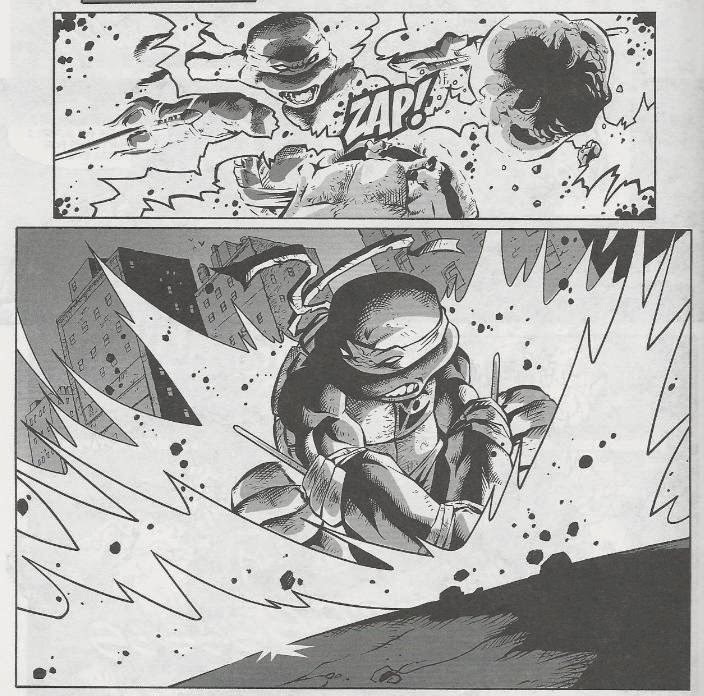 Back in the alternate future, the King of Thieves sits on the Hassock, mourning the crumbs of the Thieving God Idol as the creature continues to mock him.

*The Turtles last encountered the King of Thieves and Hadji in Tales of the TMNT (Vol. 1) #3.

*Chronologically-speaking, the Thieving God Idol was previously seen in storage in the sewer lair in Tales of the TMNT (Vol. 2) #62.

*The Turtles first met the Madhattan Maulitia in Tales of the TMNT (Vol. 2) #57 and proceeded to have encounters with them throughout TMNT (Vol. 4).

*The Turtles first met Renet in TMNT (Vol. 1) #8 and had many adventures with her since. They last saw her at Splinter’s funeral in TMNT (Vol. 4) #11.

*Among the things tossed out of the TMNT’s storage closet by the Folcrum is what appears to be an inactive Guyver unit. You know, from “The Guyver”?

*Raph last encountered werewolves and learned of the politics of the supernatural creatures of the Earth in Tales of the TMNT (Vol. 2) #7 and the Raphael: Bad Moon Rising miniseries.

An interesting follow-up to “All Hallow’s Thieves” and, appropriately enough, published on the 20th Anniversary of that very issue. I’ve gone on record as saying I didn’t think “All Hallow’s Thieves” was that great of a story, being fairly skimpy on plot. This sequel, “What Wolves Wear”, almost goes too far in the opposite direction, boasting a bit too much plot for a single issue!

Notice in my review how many times I wrote “Hadji explains”, “the King of Thieves says”, “Hadji goes on to say”, “the King of Thieves reveals”, and so on? Well, there’s a LOT of exposition in this story; comprising nearly all of it, in fact. The alternate future seen here has a very rich back story going on, but rather than get to experience any of it for ourselves (such as the Vampire hierarchy), we simply have those elements explained to us over a campfire session that lasts eight pages. I would like to have seen more of this future, and Raph escapes so unceremoniously and suddenly that I was left with the feeling that Berger may have had more stories to tell in that setting. Alas, no such luck.

The King of Thieves sure has come a long way in the twenty years since we last saw him getting hauled off by the cops for looting. A petty thief turned would-be world conqueror? I can dig it; and I especially liked his amped-up mystical powers making him a more viable threat. Nicely, though, Berger doesn’t forget to retain the King’s inherent incompetence, as he constantly tries and fails to appease the Hassock and is left pouting by issue’s end. Hadji was mostly a blank slate considering he did next to nothing in his first appearance and I enjoyed this take on him, even if he amounted to little more than a glorified narrator. His death was a bit of a let-down after he goes on this big shpiel about restoring his honor a mere panel or two before getting eaten. It was almost comical. Of course, we only see him getting mauled, so maybe he lived on in that future as a werewolf? I dunno.

The real highlight of this story, though, was the art by Andie Tong. Tong had previously penciled one of the prettiest Turtles stories ever published, “Digital Webbing Presents Teenage Mutant Ninja Turtles”. I had forgotten he drew this issue, so when I cracked it open this afternoon and found his unmistakable style, well, I was very pleasantly surprised. His art is extremely dynamic and his action sequences have a great sense of motion and weight to them. He triumphs over the various horror elements and I absolutely love the way he drew the skeletal Raph Folcrum.

Story-wise, “What Wolves Wear” comes across as a full miniseries crammed into twenty-eight pages, but the fantastic art by Andie Tong really gives it an edge. Though I’ve only seen him on two Turtles projects, the guy seems born for this series and, if we ever get any Turtle comics in the currently hazy future of the TMNT franchise, I would love to see more from him.

Grade: B- (as in, “But Raph seemed to have no problems with the indignity of his corpse being dressed in drag, strangely”.)