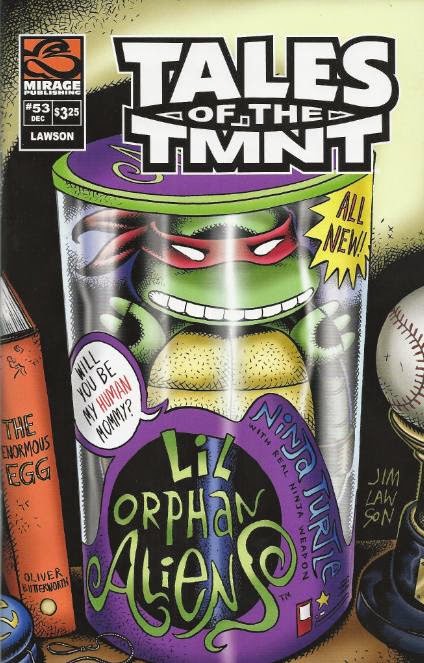 Frontispiece: Mike fails miserably at rhyming as he and his brothers build a gargantuan snowman on a rooftop.

It’s the holidays at the farm in Northampton and Casey has a plumber over to fix the water pressure. The plumber sends his teenage assistant, Brian, to the second floor to run one of the toilets. As Ryan passes Shadow’s bedroom, however, something catches his eye. On a shelf, he spots an original, mint in box, Li’l Orphan Alien doll (“Thrunknor”, specifically). 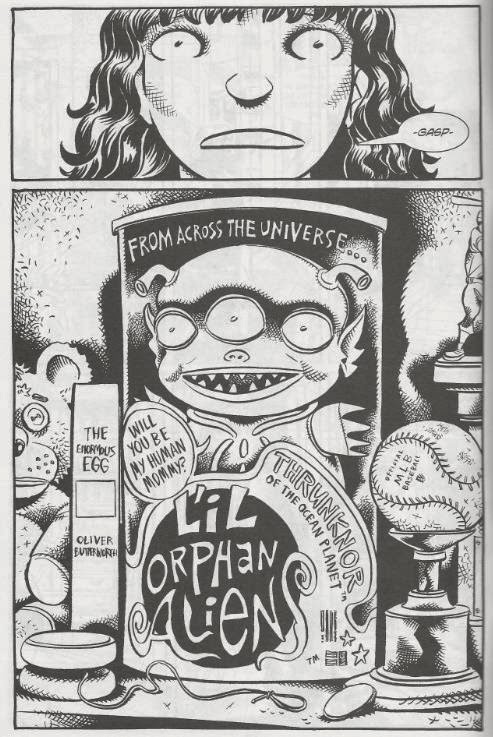 On the drive back, Brian asks his boss (Mr. Pittsinger), who the people that live on that farm are. Mr. Pittsinger explains that it’s just a husband, wife and little girl, and while they seem like nice folk, rumors tell of strange creatures prowling the woods around the place and unidentified individuals leaving the house at odd hours of the night.

When Brian gets home, he observes his collection of original Li’l Orphan Alien dolls; complete save for the absence of the elusive Thrunknor. Brian gets on the phone with his pal, Lenny, and tells him of his find. Apparently, Thrunknor had a limited production run cut short by news reports calling the toy “unlucky” (and eventually leading to the cancellation of the Li’l Orphan Alien line altogether). As a result, the toy goes for over $2,000 on the aftermarket! Hanging up, Brian ponders what he’ll do if he can’t convince the little girl who owns the toy to sell it to him. 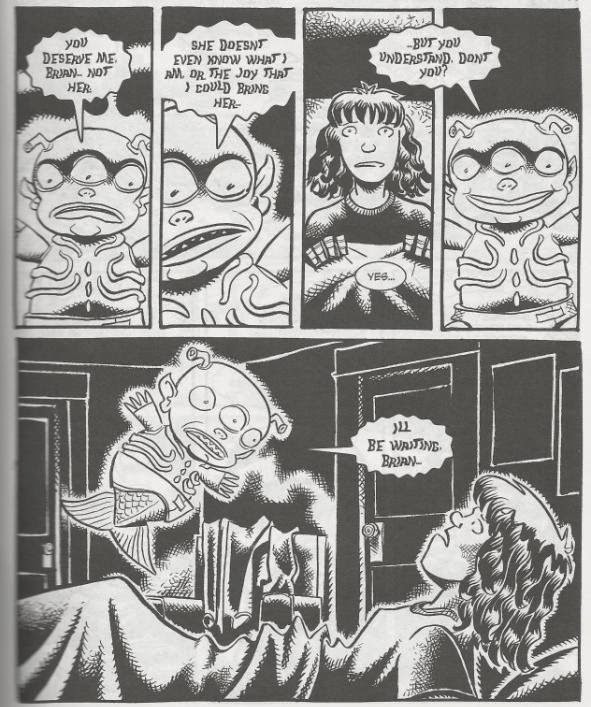 While sleeping, Brian has a bizarre dream: Thrunknor appears to him, floating over his bed, and explains that the little girl who owns him does not appreciate him and that he belongs with Brian. Brian realizes what he must do.

The next day, Brian convinces/blackmails Lenny into coming with him to the Jones farm to steal the toy. As Casey and Shadow leave for their daily walk, Brian and Lenny move in. Brian uses a ladder to sneak into Shadow’s room while Lenny stands on watch. Brian snags his precious Thrunknor, but when he comes back down, he finds Lenny missing and several strange two-toed foot prints in the snow. He then spots four creatures in otherworldly armor standing on the roof of the barn. Brian drops the toy and runs away screaming from the “aliens”. 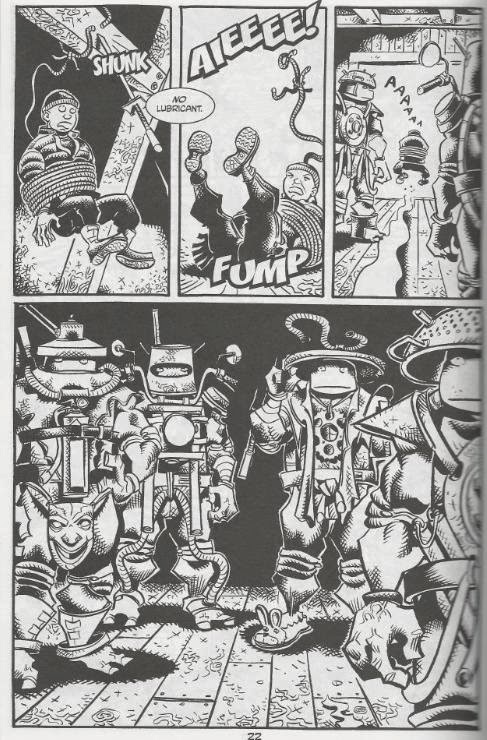 The four “aliens” then proceed into the barn, where they have Lenny bound with rope. The “aliens” prepare their “probe” (a vacuum cleaner), though they decline to use any lubricant. Arms still bound with rope, Lenny runs out of the barn, screaming. The “aliens” remove their armor (built from scrap metal), revealing themselves to be the Ninja Turtles. The Turtles proceed to have a good laugh.

Down the street, Casey and Shadow are returning home when Brian and Lenny run past them, screaming bloody murder. Shadow asks her dad what was wrong with those boys and Casey simply replies, “Sweetheart, all I know is this time of year makes people crazy”.

*This issue also contained the bonus stories, “This Mortal Shell” and “Ghosts of Christmas Past”, as well as a pin-up, “Usagi and Leo”, by Stan Sakai.

*Sakai previously provided a TMNT/Usagi pin-up in Tales of the TMNT (Vol. 2) #25.

*For what it’s worth, I think this story takes place the same December as Tales of the TMNT (Vol. 2) #65.

*The Turtles got their hands on a truckload of Li’l Orphan Alien dolls way back in Michaelangelo (microseries) #1.

It’s hard to believe that this story is 26 pages long, which is a few pages longer than the average comic you can buy on the stands today, as it whizzes by at a hurried pace. It’s very decompressed, but unlike some of Lawson’s other attempts at art and story decompression (Donatello: The Brain Thief), it works out far better.

The story focuses almost exclusively on Brian and his perspective of things, so the extra panels showing off the sci-fi memorabilia littering his room does a good job of giving the audience an idea of what this kid is like without too much crude exposition. His extended two-page phone call with Lenny might fill that “exposition” bracket, but it actually proves a useful tool in showing why a by-all-appearances normal kid who isn’t a thug or miscreant would resort to larceny (and the Turtles dish out a proper punishment; scaring him rather than beating the shit out of him).

As for the humor, I’ll admit that I got a chuckle out of the “no lubricant” gag, but even when the issue isn’t cracking jokes, the light-hearted tone and absurdity (such as the Thrunknor dream sequence) makes it an enjoyable read. The way Brian blackmails Lenny got a laugh out of me, too, for what it’s worth.

Though I doubt it was intentionally written as such, “Alien Invaders” actually compliments another Christmas-set story, “Cold, Cold Ice”, rather nicely. “Cold, Cold Ice” was a particularly sorrowful, soul-crushing tale, so reading it juxtaposed with this light and easygoing story makes the impact of that issue’s tragedy hit you even harder.

Also, this issue came with a sweet pin-up of Leo and Usagi fighting a dinosaur. 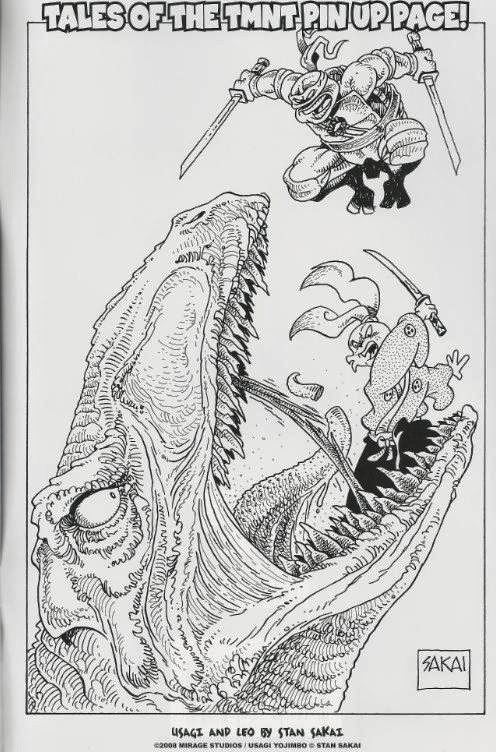 Grade: B- (as in, “But if they really wanted to scare the kid, they could’ve just made him watch ‘Secret of the Ooze’.”)