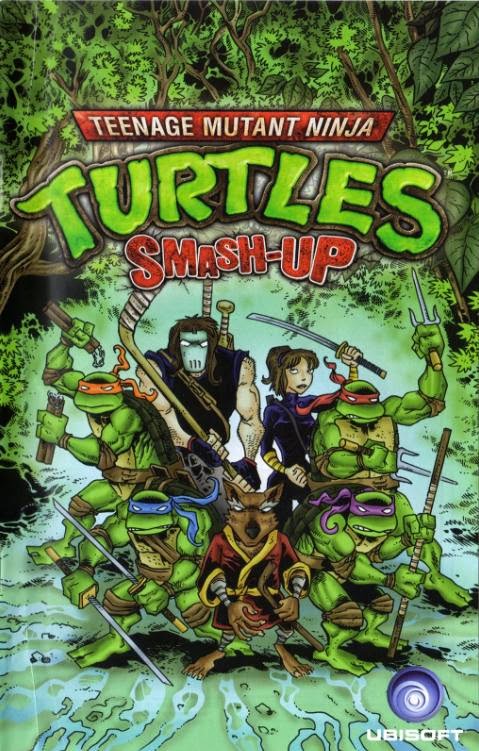 Frontispiece: Somewhere, the Fugitoid addresses the audience as pigeons land on his head. He tells his origin; how he was a scientist named Professor Honeycutt who had his mind transferred into a robot body and thus became the Fugitoid. He continues by describing the transmat device he has been hounded by evil forces to create and how he’s been on the run for years. In fact, he’s actually on the run right now, even though he doesn’t appear to be moving. Funny thing about that…

Down in the sewer lair, Splinter addresses his sons. He tells them that he has taken it upon himself to begin a tournament amongst them; winner gets to choose any prize from his private trophy case. The Turtles leap at the opportunity, though Splinter shocks them with the news that he’ll be making it more interesting: Casey Jones, April O’Neil and even he-himself will be participating. 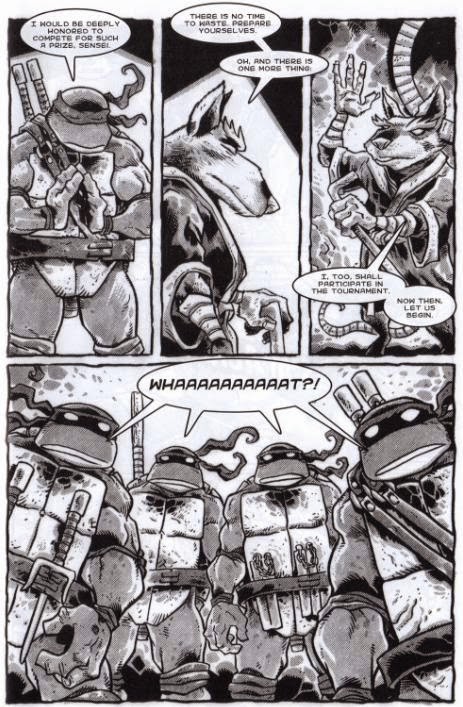 More of a free-for-all than a “tournament”, the seven brawlers spring into friendly competition: Mike takes on Don, April takes on Casey, Leo takes on Raph, Raph winds up fighting Casey, Leo gets trounced by Splinter and Casey gets struck by the old rat as well. Splinter then calls for a break, teasing the contestants with a peek at the various goodies in his display case. 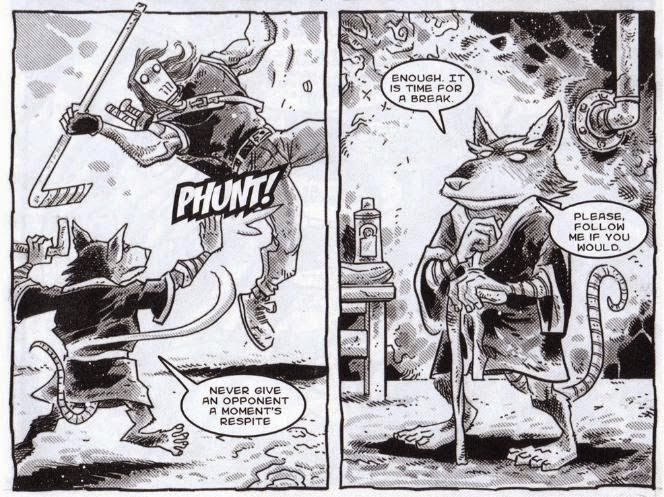 Suddenly, the Fugitoid appears on the lair’s emergency communicator with terrible news: he’s been captured by the Shredder! The Shredder picks up the phone next and taunts the Turtles, insisting that they will never rescue the Professor in time. Angered, the Turtles, April and Casey head to a rooftop for no readily apparent reason to discuss the dire situation. They lament that they haven’t a clue where the Fugitoid might be, but luckily for them, one falls right into their lap. Karai appears, informing them that the Shredder intends to force the Fugitoid to build a transmat device. He has the Professor held hostage at the Foot’s Tokyo base. The Turtles ask why she’s helping them, since she’s a member of the Foot and all, but she gives a “none of your business” and ninja-vanishes. 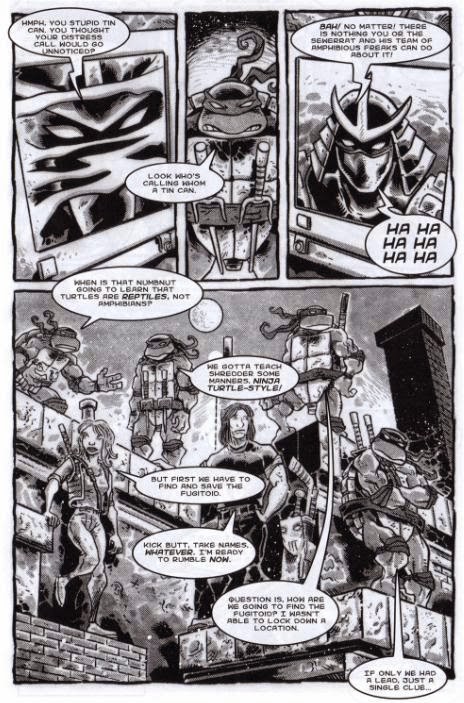 Back in the lair, Don announces that he’s jerry-rigged a device that’ll allow him to control Renet’s Time Scepter. Then, for no reason whatsoever, a giant alligator bursts through the wall of the lair and attacks. The Turtles, April, Casey and Splinter do battle with the behemoth as the Scepter activates, whisking them all away to the swamp. Splinter and Leo defeat the reptile, but knock it into a bee's nest by accident. Seeking asylum from the stinging insects, Don activates the Scepter again.

This time, he gets the location right but the time wrong. The Turtles and co wind up in Tokyo, only in the distant past. They are approached by an army of samurai and quickly do battle. In the fray, Raph kicks off one of the samurai’s helmets, revealing him to be an Oni (a demon). All the samurai reveal themselves as such and Splinter insists Donnie try the Scepter again. 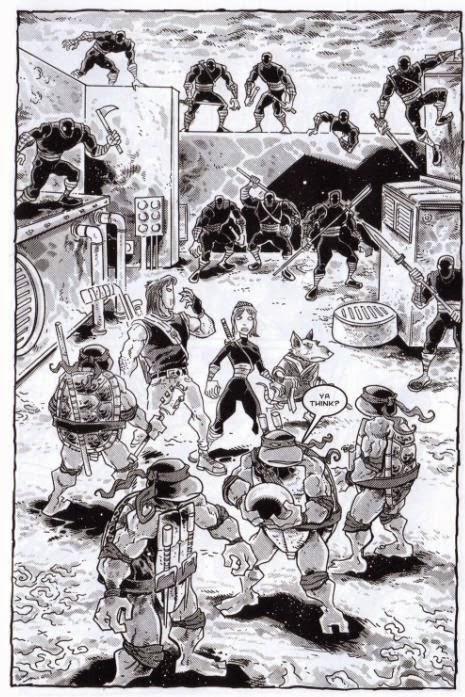 Third time’s the charm and the gang end up right where they want to be: a rooftop in modern Tokyo. Finding the Fugitoid’s disembodied noggin sitting on top of a pole, the Turtles reunite the Professor with his body. Alas, the Professor has more bad news: it was all a trap! Dozens of Foot Soldiers drop down and engage in battle. Naturally, the good guys beat them with ease. 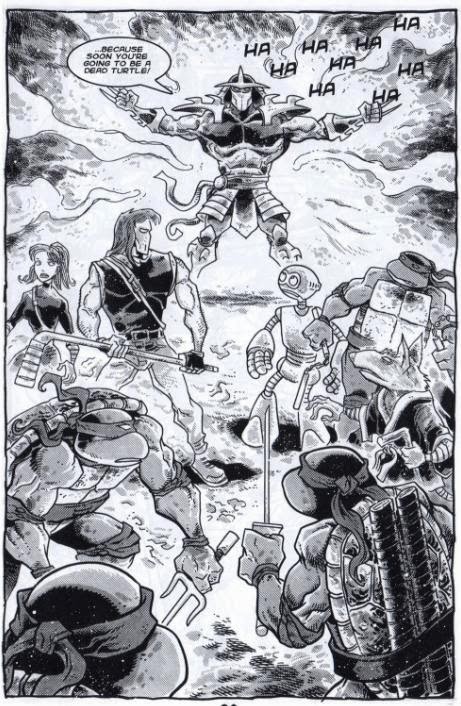 But the fight is far from over, however, as the Shredder finally makes his way onto the scene, declaring his intent to kill them all…

*This full-length, 24-page comic came packaged with the TMNT: Smash-Up video game by Ubisoft. To date, it has not been made available in any other format.

*The art style and character selection are a mish-mash of those seen in the 4Kids cartoon series and the Imagi 2007 feature film, “TMNT”. In the game (though not seen in this comic), one of the environments happens to be the Technodrome from the Fred Wolf cartoon series, too. Precisely what continuity, if any, “Smash-Up” may fit into is hard to determine and probably an unnecessary effort.

*The Fugitoid’s origin as he describes it can be seen in Fugitoid (microseries) #1 or the 4Kids TMNT episode, “Turtles in Space, part 1: The Fugitoid”.

*In the 4Kids cartoon the Time Scepter appeared belonging to Renet and Lord Simultaneous in the episode “Time Travails”. In the Mirage comic series, it was first seen in TMNT (Vol. 1) #8.

*The credits for this comic were not published within the pack-in booklet. Credits for the in-game artwork and story appear at the end of the game-itself, which were likely the product of the same team of Mirage staffers.

Well, this was a comic I wasn’t expecting to review today, but thanks go to The Technodrome Forum’s “Abnormal Freak” for providing me with the comic’s scans!

“Smash-Up” looks and feels like an issue of Tales of the TMNT (Vol. 2), albeit with the unenviable task of having to act as product placement for a rather lackluster movie tie-in video game. It has all the same length, “production values” and even frontispiece of any given issue of Tales of the TMNT, making it far superior to the sorts of 5-page minicomics that usually come packaged with games and other assorted merchandise, but the “cramming in” of as many elements from the game as possible makes it read just as awkwardly.

With the exception of the Utrominator (and perhaps the Raving Rabbids), the creative team manage to work-in all the featured characters from the game’s line-up, sometimes to rather meaningless effect (they go to a rooftop for no other reason than to “accidentally” stumble upon an unusually helpful Karai). Several locations from the game are showcased; as are elements from the game’s many “interactive environments” that Ubisoft was so proud of (that stupid, random alligator and bee's nest, for instance). I won’t hold any of this against the guys, as they had to do what they had to do, and like I said before, the fact that this thing is 24 pages and, on a visual level, could almost pass as an issue of the (then-running) TMNT comic puts it heads and shoulders above similar pack-in tripe.

Where Lawson’s artwork is concerned, I actually found myself preferring his adapted designs for April and Karai seen here over his contemporary Mirage versions of them. They certainly have more personality in their countenances and more striking outfits than his Tales of the TMNT (Vol. 2) and TMNT (Vol. 4) interpretations of the characters. His Turtles look like his Turtles, nothing new here, though I swear some of them sported Talbot-esque heads (maybe that was just an influence from his inking?).

The Shredder’s behavior in this comic kind of took me by surprise, as he talks not with the uber-serious tone of the 4Kids or Mirage Shredder, but with the ostentatious attitude of the Fred Wolf Shredder. He makes bad jokes and bad insults and even Mike mumbles an aside commenting on his stupidity (as Shredder referred to them as “amphibians” when they’re reptiles).

Overall, the awkward tie-in nature of the story (to say nothing of its incompletion) keeps it from really feeling like a “lost issue” of Tales (Vol. 2), but the visuals, length and variety of characters make it an attractive novelty for collectors. The bad news is that you have to buy a pretty lousy video game to get a hold of it, but two years after the fact, I’m pretty sure you can procure a copy from Gamestop for pocket change. Just check the case first to see if the comic’s still in there.

Grade: N/A (as in, “Now just be grateful Lawson didn’t have to try and work-in the cruise ship/killer whale level”.)