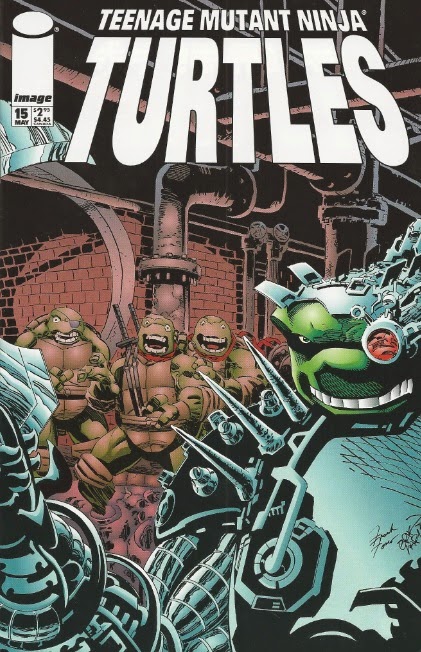 From his apartment in April’s building, Mikey pets Klunk and writes about how crazy the past two weeks have been; chasing Deathwatch across the country and Donnie being stuck in paralysis. Though Donnie’s condition has stabilized, he isn’t getting any better, floating mindlessly in a giant medicinal tank. Leo enters and delivers some worse news to Mikey: the Shredder has returned! Or so eyewitness testimony would indicate. Mike is hesitant to believe it, but Leo reminds him that the Shredder has come back before in the form of worm clones. Unfortunately, the Turtles have to tackle one crisis at a time and Leo enters the astral plane to search for Donnie’s consciousness. As Leo meditates, Mike is greeted by April, Casey and Shadow, who lay eyes on the paralyzed Donny for the first time. 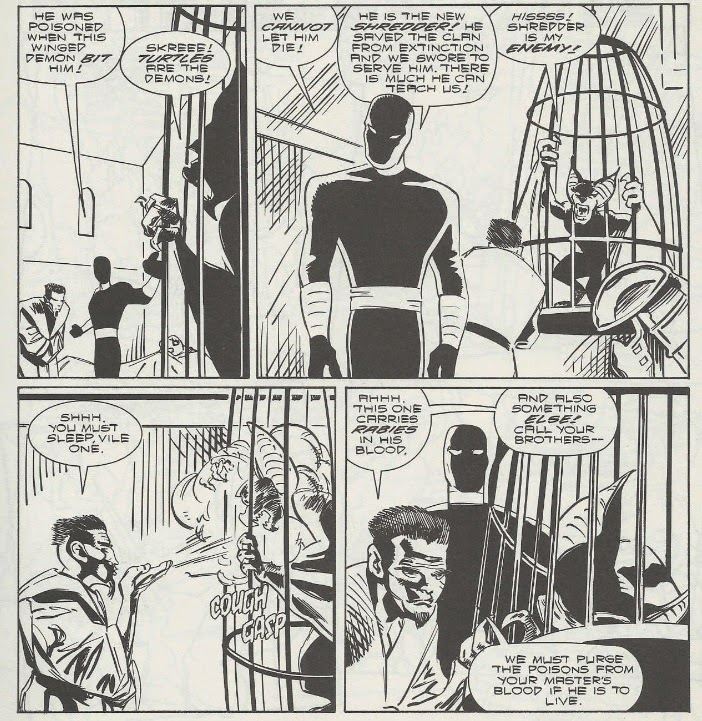 At the temporary HQ of the Foot Clan, several Foot Soldiers have carried the unconscious body of Raph to a bedroom, as well as the vampire-Splinter to a cage. Splinter’s rabid bite has made Raphael ill and a Foot medicine man (Cheng) has to heal Raph in body and spirit in order to save him.

Cheng's work sends Raph’s spirit plummeting into the Astral Plane, where he’s reunited with Donnie and the insane spirit of vampire-Splinter. Splinter flees and the brothers are approached by another familiar face: Leo! Leo helps Don follow the path back to his body before suddenly being sucked into a bright light, leaving Raph trapped all alone. 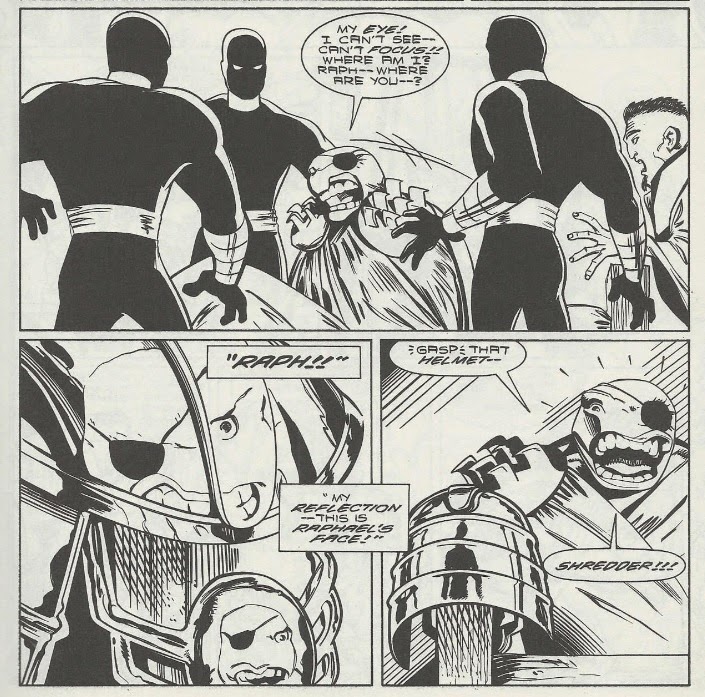 At the temporary Foot HQ, Leo awakens in Raph’s body, sees the Shredder helmet and the Foot Soldiers and freaks out. Cheng blasts him with some sleeping powder and decides to take another whack at awakening Raphael.

At Mike’s apartment, Leo’s body wakes up… with Don’s spirit inside! Don sees himself floating in the tank of goo and faints. A day later, Mike keeps watch over both his brothers while working on his latest novel (a romance novel). April enters with plenty of good news for his burgeoning writing career (he’s sold two more poems and a short story) and his burgeoning romance with Sara “Horridus” Hill (she’s sent him a grape jelly-scented letter). 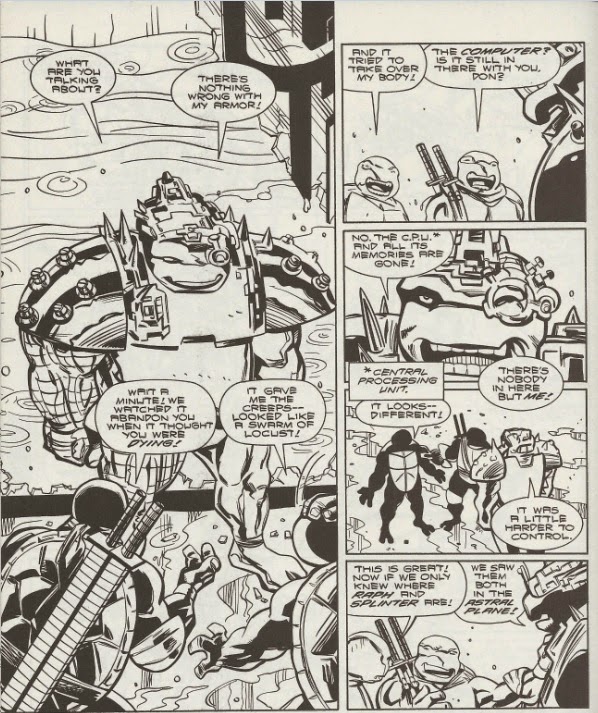 Two more days pass and Don eventually wakes up. Enraged at still being stuck in Leo’s body, he hurls a radiator at the tank. When all is said and done and the goo has drained into the sewer, Leo and Donnie awaken in their proper bodies (the tank apparently having kept them from switching). Mike and Leo are overjoyed, though they fear that Donnie will still be left a vegetable and consider calling either Dragon or Vanguard for help in getting his cybernetics repaired. An unnecessary gesture, as Donnie regrows his cybernetic parts to full functionality and informs them that the computer is gone and there’s no one in his noggin but himself. The reunion isn’t happy for long, as Leo gets right down to business. He recalls what he saw when he briefly inhabited Raph’s body and their mission is clear: They must rescue Raphael and Splinter from the Shredder!

*Raeburn removed Donatello’s soul from his body and trapped it in the Astral Plane in TMNT (Vol. 3) #11. Mikey last met Sara “Horridus” Hill in that same issue.

*In the letters column, Carlson explains that Raph’s face has already begun healing and that his eye is now only sensitive to light rather than completely blind.

The Deathwatch arc is mercifully behind us, Donnie’s returned to his body and Splinter is once again a focal plot point: This book is back on track!

Although there’s a bit of a narrative disconnect between where the last issue left off and where this one picked up, it still functions as a nice breather between the ongoing plot lines, as all the Turtles rebuild their strength and slowly but surely reunite. Donnie’s malfunctioning body wasn’t exactly a subplot I was entirely enthralled with, so I was pleased to see it at last resolved in this issue, albeit through the somewhat trite plot device of “body-swapping”. Thankfully, though, Carlson doesn’t play it for laughs or milk too much nonsense from the overused gimmick, instead simply employing it as one last aggravating hurtle between Donatello and his much-deserved wellness.

The New York branch of the Foot Clan seems to be in dire straits at this point in the TMNT’s timeline, as only a handful of surviving Foot Soldiers represent a large enough majority to summarily elect Raph as the undisputed new Shredder. The New York branch haven’t exactly had the most competent and prosperous history for the past few years, primarily thanks to intervening from the Turtles and in-fighting amongst themselves, but “City at War” was supposed to clean all that rigmarole up. Since the Japanese branch of the Foot appears to be the primary authority of the Clan, you’d think after this catastrophe they’d finally just say “screw it” and dissolve their New York operations entirely. Or maybe just move to Chicago or LA or somewhere else in the US. Because these New York Foot Soldiers just can’t seem to do anything right.

Of the various plot and character advancements on display in this issue, it was Mike’s continuing prosperity that hooked me more than any other. Mike’s aspirations in this volume are the most down to Earth of any of the Turtles, as all he wants is a good job and a loving girlfriend, so to see him effectively on his way to ensnaring both of those was a nice touch. Both successes are built up from plot points going all the way back to the beginning of the volume, too, so they felt like entirely natural accomplishments.

So to wrap things up, if the previous Deathwatch arc left a bad taste in your mouth as it did with me, then you should be pleased to see some definitely positive plot progression happen in this one issue. The “body-swapping” may not have been the most original story concept, but at least it got everyone back where they belong.

Grade: B (as in, “But the official TMNT newsletter used to be hosted on a Fortune City site? Man, this comic takes me back...”)