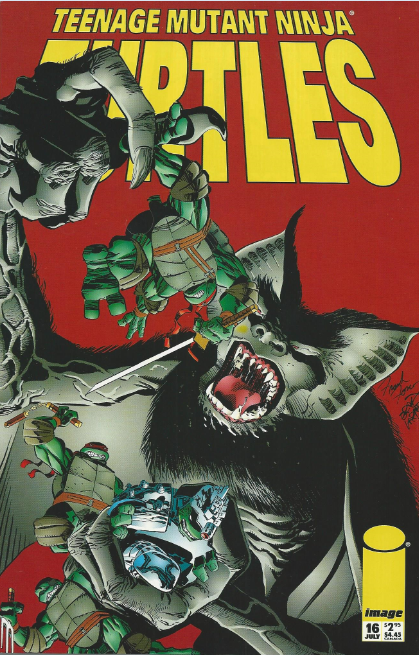 On the rooftops, Leo remarks to himself how he, Don and Mike have at last located the temporary HQ of the Foot Clan and are preparing their assault to rescue Raphael and Splinter. Suddenly, Leo is ambushed by the Shredder! Or so he thinks. It’s actually Donny, whose armor has subconsciously taken on a form similar to the Shredder’s. Don apologizes, as controlling his armor has become more difficult ever since the central computer was evicted. Mike tells them both to shut up, as he spies on the nearby Oriental Palace Theater: temporary HQ of the Foot. 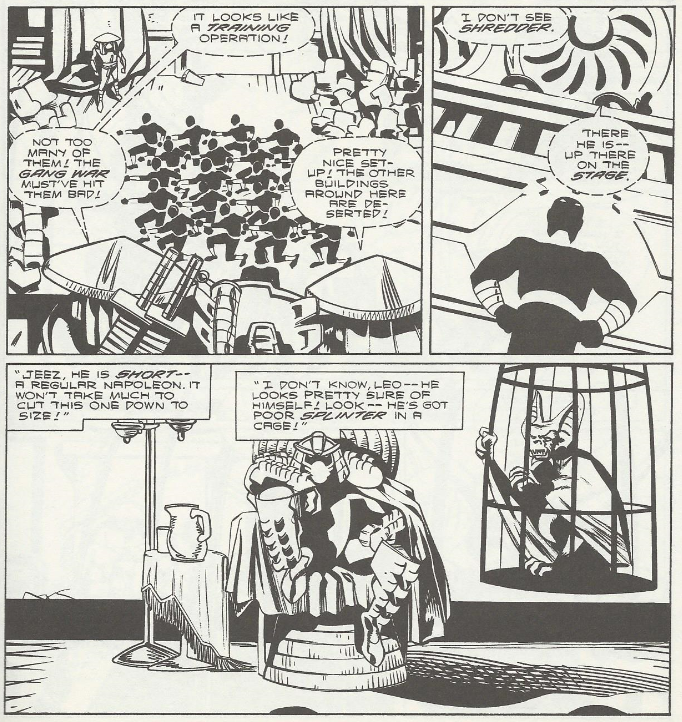 As Leo and Mike take out the Elite Guard (stealing their garb for disguises), Don securely opens the rooftop door for entry. The Turtles sneak onto a balcony overlooking a Foot training exercise. From a throne situated at the head of the army is none other than the Shredder and vampire-Splinter (who is locked in a cage). Don forms his own Elite Guard disguise from his armor and the Turtles sneak down to the ground level to close in on their foe.

Unfortunately, Splinter senses the approach of the “Turtle-Demons” and alerts the Foot Soldiers to the intruders. As Don guards Splinter and Mike takes on the Foot Soldiers, Leo heads for the primary target: The Shredder. Mike’s disguise is quickly lost in the battle, and as soon as the Foot see that he is one of the Turtles, they drop their weapons and bow, thoroughly perplexing Mike. Meanwhile, Leo demands that the “imposter” remove his armor. The Shredder declares that he’s earned the right to wear the armor and fights back. As Leo mentions that he’s perfectly capable of killing the Shredder a third time, Raphael realizes who he’s really fighting and removes his helmet. Leo is shocked, but the brothers quickly share a laugh at the whole situation as Mike demands to be brought up to speed. 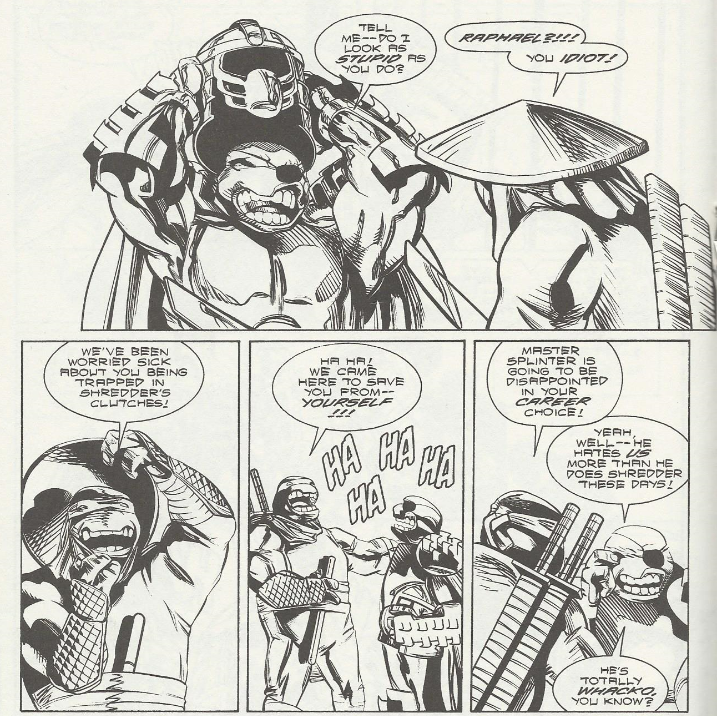 Later, after some explaining, the Turtles decide to focus on saving Splinter from his condition. Leo recommends using some of the rabies vaccine he acquired in Midway City, but the Foot medicine man (Cheng) informs him that Splinter’s condition is as spiritual as it is physical and no vaccine can save him. After much argument, the Turtles agree to journey into the Astral Plane (Donnie most reluctantly of all) and keep Splinter’s spirit busy as Cheng cleanses it with their own physical and spiritual energies. 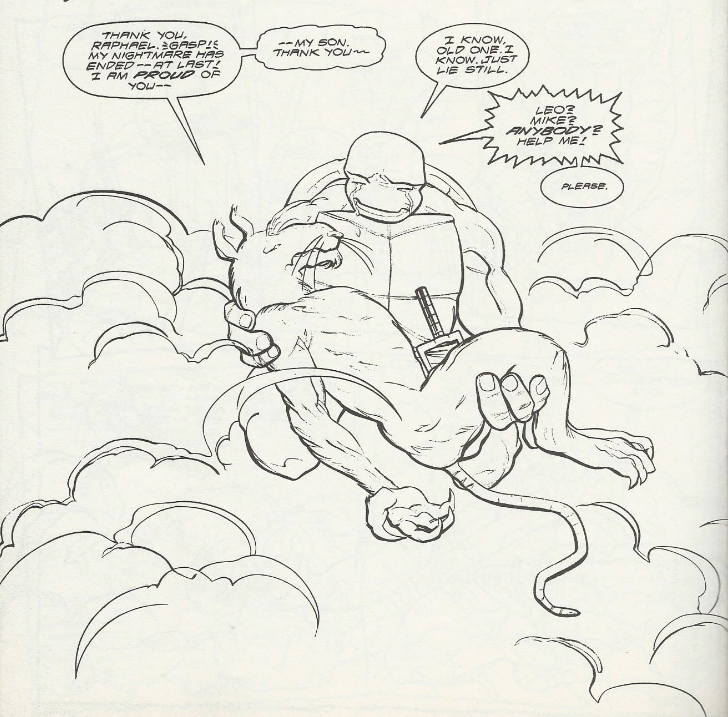 Within the Astral Plane, the Turtles find themselves “healed” from their various physical mutilations, though Splinter remains a psychotic vampire bat. The Turtles engage Splinter in battle, but their desire to keep from harming him puts them at a severe disadvantage. Cheng then appears to Don with the bad news that, so far, all of Splinter’s mind that he’s been able to unlock are his ninjutsu skills. Now an insane vampire with all the knowledge and ability of a ninja master, Splinter proceeds to seize Leo’s katana and trash his sons. Raph has had enough, however, and stabs Splinter in the back with one of his sai. As Raph cradles Splinter in his arms, the sensei changes back to his form as a rat, apparently cured of his vampirism. Splinter thanks Raph for saving him and drifts off into oblivion, leaving Raph to cry for help.

*Before starting their next adventure, though, the Turtles will take time out to attend the wedding of Barbaric and Ricochet in The Savage Dragon #41.

*The Shredder’s Elite Guard were thought to have been wiped out after TMNT (Vol. 1) #61.

*Leo got the rabies serum and fought vampire-Splinter in TMNT (Vol. 3) #9.

TMNT #16 is one of my favorite issues of the entire Image series and the best story to come from the book since the “kidnapping of Shadow” arc from issues six through eight. We finally get to see the Turtles, all in their right minds and at full health for the first time in what feels like forever, teaming up for some good ole fashioned ninja action. While I would have preferred a longer battle between Leo and Raphael, I understand that the tenuous façade could only have lasted for so long and I was perfectly pleased with what I got.

For readers put off by the various “mutilations” of the Turtles, you should appreciate the entire Astral Plane sequence from the end of this issue, as it puts the Turtles back in their familiar bodies with their familiar weapons, leading to some more “classic” TMNT action. While I might take issue with Donny being portrayed as rather ineffective without his armor (he even doubts his battle prowess now that he’s without it, despite his lifetime of martial arts training), I’ll just chalk that up to being “rusty”.

It’s good to finally see some closure on the vampire-Splinter arc, as the old rat has been an old bat for over ten issues, now. The subplot dragged on a bit too long, mainly thanks to the insipid Deathwatch arc waylaying the storyline for four issues, but it reached a worthwhile climax as the Turtles are forced to do battle with their father. Though Raph’s remorse for stabbing Splinter at the end of the issue was a nice touch of drama, it felt a tad insincere as Raph was just moments ago spouting various threats and machoisms as he plunged the weapon into his dad’s back. Still, for the Image series, even a smidgen of emotional concern leaking from the Turtles is something to be excited about.

Fosco really knocks it out of the park with this issue which is packed with so many exciting and dramatic panels that I had a real dilemma in choosing which ones to scan in for this review. I think Fosco’s work shines best when set in the dark, noir storylines involving the Foot and the mob, moreso than the outrageous sci-fi and superhero adventure stuff that he’d been slogging through for the past half-dozen issues. His talents are particularly on display during the sequence where the Turtles infiltrate the theater and find the Shredder lounging on his throne in a posture of smug, confident authority. Leo’s brief battle with the Shredder, followed by Raph’s unmasking, looks especially good.

Heike’s inking is really picking up. I was fairly harsh toward it when he first joined the book, but the man’s definitely found his comfort zone. Cheng could probably stand to be a little less “shadowy” in appearance, as you can scarcely discern any distinguishing facial features, but that’s a minor grievance if anything. All the sequences taking place in the Astral Plane are done without any shading or toning of any kind; strictly character outlines and nothing more. This can make picking the characters apart and even telling them apart from the puffy clouds a bit difficult, at least when the line-weight isn’t varied enough.

TMNT #16 is one of the better issues of the series and a real highlight of the run. It definitely marks an improving direction for the volume, as it leaves the gratuitous crossovers behind it and rediscovers its focus and plot progression.

Grade: A- (as in, “And I count 20 Foot Soldiers in that training exercise. Fallen on hard times, indeed…”)