The 4th Live-Action TMNT Movie That Never Was... 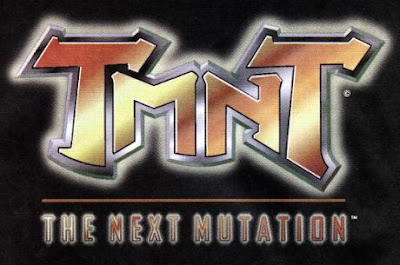 “TMNT IV” was a movie locked in Production Hell for a very, very long time. Over ten years of false starts, rewrites and straight-up “this is never gonna happen”s later, we eventually got our fourth Teenage Mutant Ninja Turtles feature film in the form of Imagi’s 2007 CG-animated flick, simply titled “TMNT”.

But that wasn’t the flick we were supposed to get.

In 1994, only a year after “TMNT III” had committed its all-out assault on the art of cinema, work was underway on the next installment in the live-action film franchise. The original concept for the film was a considerable departure from the previous three efforts and would have made for a very… “unique” piece of Turtles cinema.

No full script or detailed plot rundowns have ever been revealed publically (so far as I know, anyway), but tidbits have slipped out here and there over the years. So, using Google, a magnifying glass, and mostly Google, I’ve gathered together all the bits and pieces I could find from official sources regarding the 4th live-action TMNT movie that never was…


*"TMNT: The Next Mutation"

Tentatively titled “TMNT: The Next Mutation”, conceptual work on the film began in 1994 at the behest of “the movie studio” (presumably Clearwater Holdings and Golden Harvest, producers of the previous three films). Kevin Eastman and Peter Laird hunkered down and, after coming up with a plot outline, started drawing sketches of the Turtles as they’d appear in the film.

The basic plot premise, at least as has been revealed, is that the Turtles and Splinter would be undergoing secondary mutations as a result of the mutagen in their bodies continuing to change them. These secondary mutations would affect each Turtle differently, granting them new powers and appearances that would come with their own unique sets of pros and cons. “The Next Mutation”, indeed.

The majority of this information came via Peter Laird’s blog series, “Blast from the Past”, where he posts little-seen artwork and little-known stories to give fans a greater insight into the behind the scenes aspect of the TMNT franchise. Beginning with Blast from the Past #36, Laird revealed conceptual art and details for the unproduced film.

BFTP #36, after a brief description of the proposed film’s plot to put the art in context, showed us Donatello and his “next mutation”. In Laird’s words, “Don was given the least obvious mutation -- growing telekinetic and telepathic abilities, unfortunately counterpointed by diminishing eyesight (hence the vision-enhancing goggles). We also provided him with an updated “techno” version of his bo staff.” 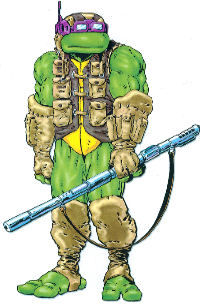 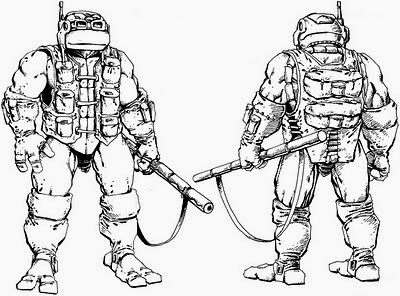 BFTP #37 revealed the new and improved Leonardo: “I believe Leo’s new mutation was the ability to morph his skin into a kind of nearly impenetrable chrome-like surface (shades of Ben Boxer from Jack Kirby’s “Kamandi” comics!).” 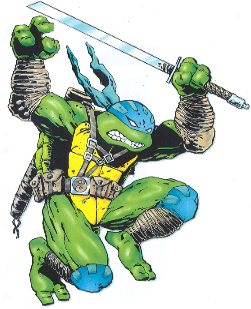 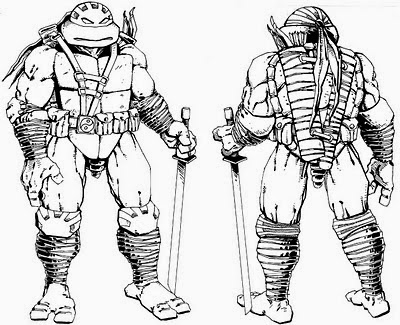 BFTP #38 covered Splinter: “We wanted to give Splinter a much more active part in the battles that the Turtles fought, and so he was going to have the ability to morph into a big, lithe, muscular “super rat mutant” type of thing.” 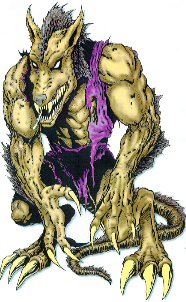 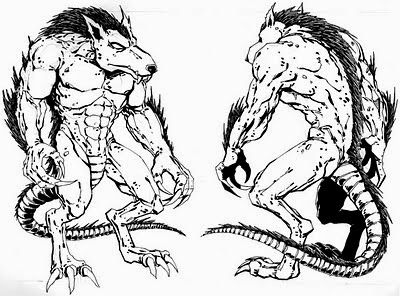 BFTP #39 was all about Michelangelo: “Here we gave Mike a more “street” look because his new mutation gave him the ability to project a human appearance onto his turtle features, allowing him to interact freely with humans.” 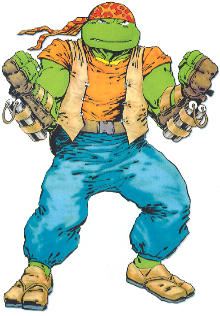 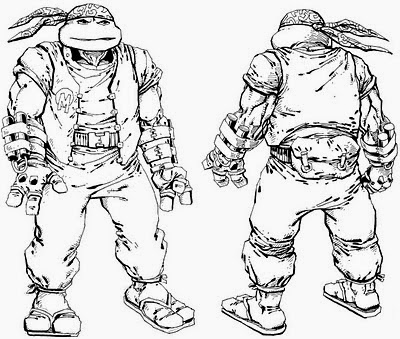 Lastly, BFTP #40 showed us all what Raphael might have looked like: “One of our ideas was to give Raphael the ability to “morph” into what we were calling “Raptor Raph”, complete with big gnashy teeth and claws to complement his big gnashy personality.” 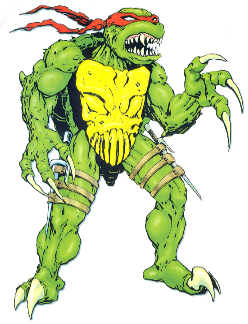 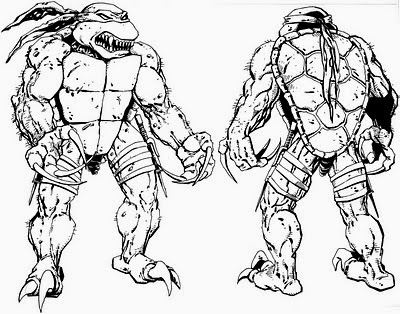 Obviously, the film never got off the ground, but how close was it to becoming reality? Hard to say, I suppose. The letters pages in Image’s TMNT Volume 3 (1996) comic series often teased that the film was “in the works”, but such stock phrases are never particularly reliable. The only hint we ever got that this project was a genuine possibility came in a 1994 comic book, CBS Action Zone #1. Printed by CBS and containing stories promoting their then-current Saturday Morning cartoon line-up, the issue boasted this cryptic teaser image: You’ll notice that that’s “Raptor Raph” down there at the bottom. This was one of very few official promotions released for "TMNT: The Next Mutation" (you'll see another in a moment), exhibiting that, for at least a brief span of time, the film was considered a "sure thing".


*And Then There Was Kirby

So who the Hell is Kirby? I dunno, but apparently he was going to be in this movie.

Plans were made for “TMNT: The Next Mutation” to feature a brand new “Fifth Turtle”. As the original foursome were all named after renowned artists, this fifth Turtle would follow suit, taking his proper noun from Jack Kirby (whom Eastman and Laird were, and still are, unashamed worshippers). Any further information on Kirby, such as how he would have been implemented in the film (A villain? A brother?) is unknown to this day. Whether he hails from the same script treatment that saw the Turtles undergoing their secondary mutations or whether he was created for an entirely separate plot is also a mystery yet to be revealed.

All we know of Kirby comes from two places. The first being a two-page spread of artwork in Kevin Eastman’s Artobiography coffee table book. The pages boast over a dozen potential designs for the character with only this tidbit to put them in context: “TMNT movie four concept sketches for a fifth Turtle named ‘Kirby’.” 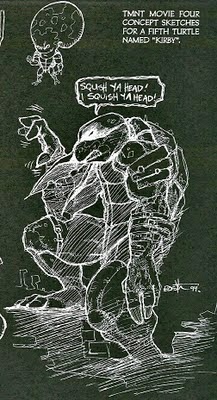 There is absolutely no telling what kind of a personality Kirby might have had, or even what he may have actually wound up looking like (the collage of sketches cover a ridiculously wide range of ideas and gags). The only thing the various sketches seem to have in common is that Kirby would have had four fingers instead of three. Fascinating.

Kirby was more than just some idle concept doodled by Eastman in his spare time, though. A design sketch by Mirage staffer Michael Dooney was submitted to Playmates for a potential “Cyber Kirby” action figure. 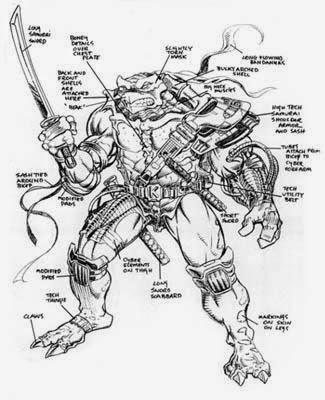 It's doubtful that Kirby would have been a cyborg in the film, as Playmates had a habit of subjecting the Turtles to all sorts of indignant outfits that neither reflected the content of actual TMNT media, nor the tastes of the toy-buying public. Still, he’s kinda cool-looking.

But while we're on the subject of Kirby, "TMNT: The Next Mutation" and Playmates, Kirby made another brief appearance, this time as a mysterious sillouette drawn by Michael Dooney for the 1996 Playmates Toys catalog, on their page advertising the upcoming "TMNT IV" toyline and merchandising campaign: 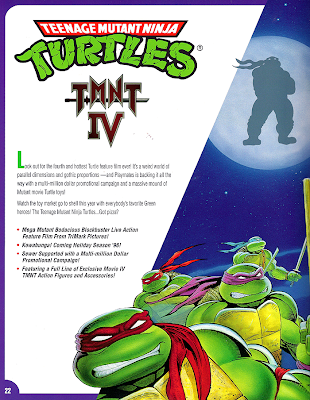 "Look out for the fourth and hottest Turtle feature film ever! It's a weird world of parallel dimensions and gothic proportions - and Playmates is backing it all the way with a multi-million dollar promotional campaign and a massive mound of Mutant movie Turtle toys!"

Playmates seemed pretty certain this film was on the way (listing Trimark as the distributors), readying the toy-hungry public for their exhaustive wave of "TMNT IV" merchandise leading up to the 1996 holiday season's release of the film. Well, that never happened. Exactly how much "TMNT IV" merchandise made it to the test production stage is unknown, with only the aforementioned "Cyber Kirby" toy being revealed to the public as a potential release (I imagine a "regular" Kirby would have filled out the line along with versions of the Turtles with their secondary mutations).

Precisely what they meant by "parallel dimensions" and "gothic proportions" is a mystery to me, at least in relation to Laird's info about the proposed film's plot. Did Kirby come from a parallel universe? We'll probably never know.


*But Why Throw Away What Can Be Recycled?

But many of the ideas conceived for the film eventually saw actual implementation across the various other Turtle media outlets.

The secondary mutations, particularly the hideous and feral concept of “Raptor Raph”, found new life in the 9th (1995) and 10th (1996) seasons of the Fred Wolf TMNT animated series, where their “unstable mutations” were the source of a story arc beginning with the episode “The Wrath of Medusa” and not resolved until the episode “The Beginning of the End”.

The Turtles' secondary mutations all used the "Raptor Raph" concept as a base, though a few of the unique ideas managed to seap through. Donatello boasted an eye-piece that gaved him enhanced sight (such as x-ray vision), loosely similar to the original idea of the "vision-enhacing goggles". Leonardo, though not able to transform his skin into metal, did have an inexplicable set of armor as a part of his mutation. Raphael, meanwhile, kept the elongated talons of his "raptor" design. Michaelangelo? Nah, he got nuthin'. 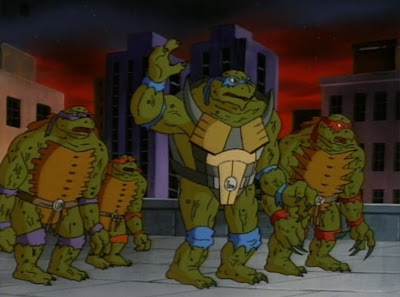 In Blast from the Past #40, Laird would also reveal that the idea for “Raptor Raph” influenced him during TMNT Volume 4 (2001), when he decided to have Raph mutate into a hideous monster dubbed “Gameraph” after undergoing a bite from some vampires: “Years later, during the Volume 4 run of my TMNT comic, I decided to (temporarily) transform Raph into a beastly-looking thing with some similarities to this iteration (minus the "morphing" powers).” 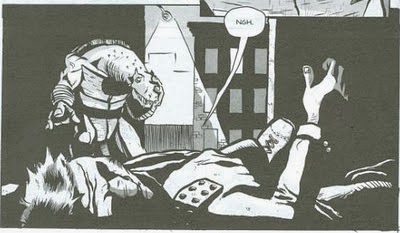 And obviously, the title (after a slight modification) also found use in the 1997 live-action television series from Saban, “Ninja Turtles: The Next Mutation”. Infamously, “The Next Mutation” included a fifth Turtle of its own, though not Kirby. I am, of course, speaking of Venus De Milo… 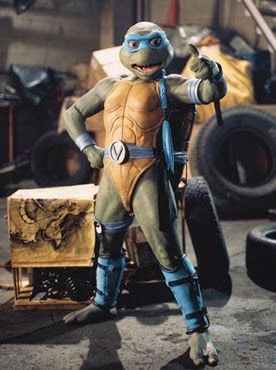 Now let us never speak of her again.

After "TMNT: The Next Mutation" was rejected and chopped up for spare parts, another attempt at a 4th film was made in 2001, aimming to produce a completely different type of Ninja Turtle flick.

Steve Barron (Director of the original "TMNT the Movie") teamed up with Brendan McCarthy (concept and storyboard artist for "TMNT the Movie") for a pitch that would have had the Turtles looking very... "street": 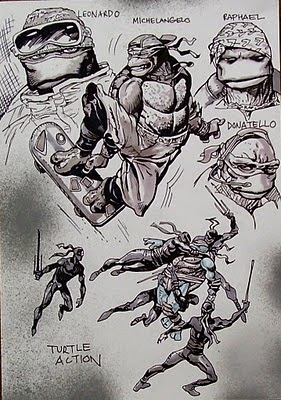 Aside from the numerous pieces illustrating the Turtles garbed in normal outfits and interacting with humans (reposted here is only a sampling of the artwork; for the full gallery, go to Brendan McCarthy's homepage linked at the end of this article), the only unifying tidbit amongst the sketches is a mysterious, sinister-looking Turtle of gargantuan proportions, clad in what looks like modified Shredder armor. Shades of Raphael's turn as Shredder from Image's TMNT Volume 3 series, or perhaps a new take on "Kirby"? 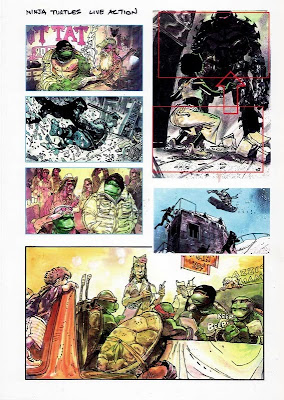 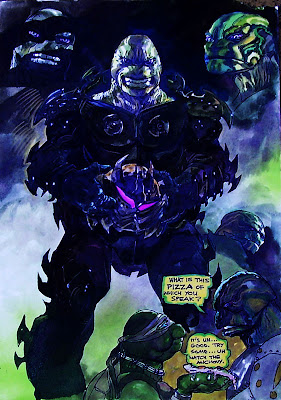 Intended as a live-action endeavor (if the notes on the concept art are to be believed), it was never-the-less rejected and Imagi's bid eventually won out, resulting in the 2007 flick that nobody bothered to go see in the movie theater.

As cool as some of that Eastman/Laird art for "TMNT: The Next Mutation" may be on the surface, the one thing we should all bear in mind is that this was intended to be a live-action film made in 1994. Jim Henson’s Creature Shop had already abandoned the franchise following “TMNT II: Secret of the Ooze”, so the costumes and animatronic effects for the rather ambitious scope of “TMNT: The Next Mutation” likely would have fallen on the studio that did “TMNT III”… The All Effects Group. 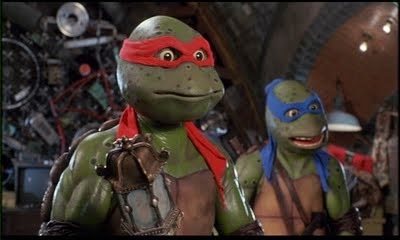 Perhaps this was a mercy killing.

Comics Alliance has unearthed a treasure chest of "TMNT: The Next Mutation" artwork, including (presumably) alternate universe versions of April and Casey, a thorough rundown of Kirby's many proposed designs, artwork for Super Shredder and his John Woo-esque Foot Soldiers, and even new villains named after Mirage artists (Jim) Lawson, (Eric) Talbot and (Michael) Bugman (Dooney).

TMNTpedia’s “TMNT: The Next Mutation” image gallery, uploaded by The S (http://tmnt.wikia.com/wiki/TMNT%3A_The_Next_Mutation)