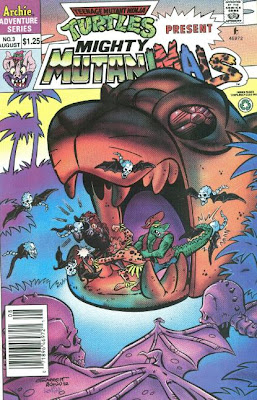 Riding atop his steed, Beelzy, the Grim Reaper carries Juntarra into the mouth of his skull-shaped temple (as an eagle observes from the sky). Setting Juntarra down, Death worries that the Mutanimals are too far ahead of schedule and the plans orchestrated by himself and a mysterious other could be ruined if they arrive too early. Mixing a spell into a bubbling cauldron, Death gleefully prepares a surprise for the heroes. 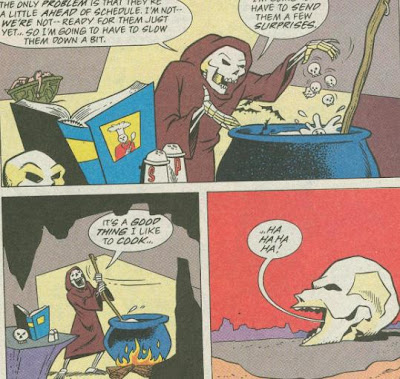 Scaling a temple in the shape of a jaguar head, Jagwar announces that the Mutanimals have at last reached the Path of the West Wind, the Path of the Jaguar. The Jaguar-spirit, who is also Jagwar’s father, requires all who confront him to face death. Man-Ray complains, suggesting they just skip all these bogus supernatural “paths” and go directly to the East where they know Juntarra has been taken. Jagwar explains that they are on a supernatural mission and must follow a supernatural path. Being a scientist, Man-Ray refuses to believe in such nonsense and rolls his eyes as the rest of the Mutanimals sit and meditate. 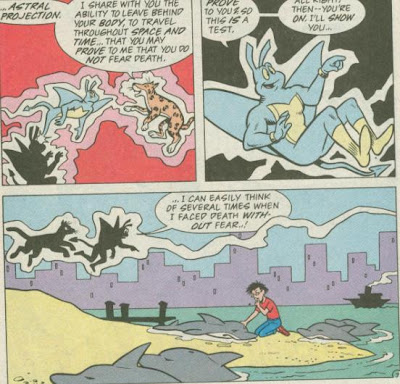 Suddenly, the Jaguar-spirit appears to Man-Ray, asking if he fears death. Man-Ray boisterously reveals that since death is an unknown, and he has no cause to fear the unknown, then therefore he does not fear death. The Jaguar-spirit takes Man-Ray on a spiritual tour of his life, to when he was a grad student in 1987, trying to cure several dying dolphins of a mysterious poison and again to the summer of 1988 when he was doused in mutagen and transformed into Man-Ray. Even as Jack Finney, he was more curious than scared, never fearing death. Taking the tour into his own hands, Man-Ray shows the Jaguar-spirit the times he fought Cap’n Mossback and the aliens Scul and Bean, never showing fear in either encounter.

The Jaguar-spirit senses danger and drags Man-Ray back to his body. The Mutanimals come to in time to spot a flock of bat-winged skulls ("deadheads") flying toward them. The Mutanimals engage the creatures in battle, with one narrowly making off with Screwloose. Screwloose escapes with Leatherhead’s help and manages to smash the last remaining deadhead. 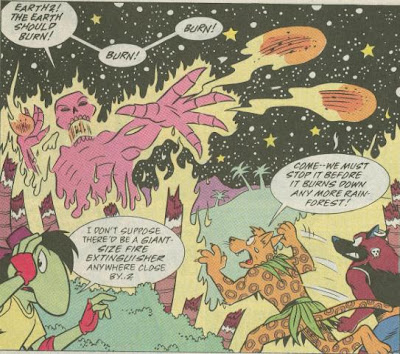 The fight isn’t over, as a colossal burning skeleton attacks, hurling fireballs in every direction. Man-Ray comes up with a strategy on the spot and, with the power of name-calling, lures the burning monstrosity to a nearby lake, where it evaporates on contact with the water. From the sky, the Jaguar-spirit is impressed, conceding that Man-Ray truly does not fear death. As the Mutanimals reunite, Screwloose remarks that their challenges were way too easy, as if someone or something were merely trying to stall them.

At the skull temple, Death laughs as he cleans out his cauldron, pondering the next challenge he can concoct for his foes. Juntarra quietly comes to and attempts to sneak away. Her escape is barred by a familiar cigar-smoking, horn-headed fiend in a business suit.

This first arc of the Mighty Mutanimals ongoing series is something of an odd creature. The adventure-itself is a pretty dull “quest”, which sees the team going from temple to temple, encountering a monster here or there, dispatching the enemies with a dull fight scene and then moving on to the next path. But it’s not the “quest” that makes this first arc so interesting, but how each issue spotlights a member of the Mutanimals, giving us deeper insight into their history and personality.

Man-Ray is a hard character to get a bead on, if you ask me. When he first appeared, he was just a scientist that got turned into a big buff fish with little personality. His subsequent appearances centered around the death of his friend Bubbla and sent him into an “angsty” period. By the time the Mutanimals ongoing began, he regained some of his humor, or at least the more whimsical art lightened his mood. He’s sort of all over the place.

“Deadheads” sees that despite having been a 98lbs weakling in his human years, his instinctual scientific curiosity as kept him from fearing death even when drowning horribly in a flood of burning green chemicals. Dude’s pretty hardcore. I think the trip down memory lane for Man-Ray could have lasted longer, perhaps replacing the page space reserved for the titular deadheads (the forest fire monster was action-enough for this issue, the deadheads were just pointless). Still, it was a nice surprise to see the Path of the Jaguar focus on Man-Ray and not Jagwar, whom you’d suspect would get the showcase.

Artist Mike Kazaleh takes over for Garret Ho with this issue, though he does his level best to stick to Ho’s character designs. Kazaleh’s style is “cuter” than Ho’s, as the superheroic characters tend to look more adorable than fearsome. I like the way he exaggerates the facial expressions on the characters (particularly Screwloose) and Death’s “cooking” sequences are a nice touch of over-the-top humor. Kazaleh just doesn’t really stand out on his own, lacking in instantly identifiable,unique aesthetics. But that isn’t necessarily a terrible thing, mind you, as he’s covering for Garret Ho and keeping the visual of the title consistent.