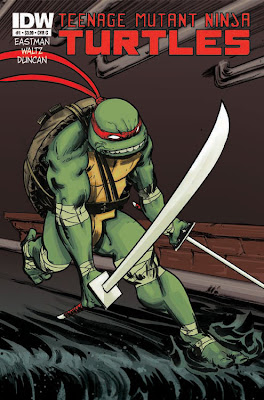 So IDW has finally unveiled the details on their upcoming Teenage Mutant Ninja Turtles comic due this fall! The news strikes me as very exciting and reassuring.

*Gonna be a fresh start, comparable to Marvel's "Ultimates" series, borrowing its core elements from the Mirage stories while amalgamating traits from other incarnations of the Turtles, too.

*Will NOT be a tie-in to the new Nickelodeon cartoon.

*Kevin Eastman is co-plotting the series in addition to doing layouts and variant covers.

*A mutant cat named "Old Hob" will be the opening villain. Created by Chris Ryall, EIC of IDW.


Personally, I am PSYCHED. Dan Duncan's artwork looks pretty hip from those covers and I can't wait to see how he colaborates with Eastman's layouts. I'm afraid I'm not acquainted with much of Waltz's work, though the interview shows what a fanboy he is of the franchise and the notion that he'll be incorporating ideas not just from the Mirage series but from ancilliary Turtle media as well has me very excited. Let Mirage be Mirage and don't be afraid to draw inspiration from the cartoons and spin-off comics, I say!

My hopes are high for this series and news such as this has me in a good mood. Looking forward more now than ever.
Posted by TMNT Entity at 8:57 PM