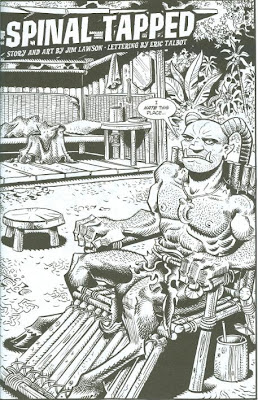 In the age of the dinosaurs, Savanti Romero cuts himself shaving with a rock and laments how much he hates the time period he’s trapped in. Meanwhile, his tiny dinosaur servant (magically transformed from an ordinary sea lizard) fails time and again to fish the missing time scepter out of the sea, returning only with bones.

After three weeks of such nonsense, the dino finally returns with the scepter! Romero is ecstatic, at least until he discovers that the scepter doesn’t work. Romero considers the possibility that Lord Simultaneous may have equipped it with some sort of fail-safe, but the sound of the Turtles and Renet having a good time on the other side of the beach entices him to crash their party in search of answers. 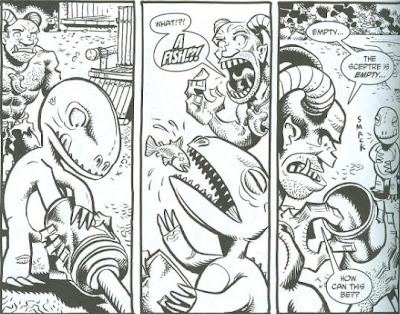 At their end of the beach, the Turtles and Renet are busy fishing, though Renet is too easily distracted to focus on the sport. She spots an adorable shrew being bullied by bigger shrews and decides to “grow” it magically into a mammoth sloth. The sloth tramples its shrew-enemies and heads back into the jungle.

Witnessing the display, Romero suddenly has an epiphany: Renet is the time scepter! Renet did not “grow” the shrew into a sloth, but rather “evolved” the critter into its evolutionary descendant. He realizes that all of Renet’s time and space distorting powers are uniquely her own (though she-herself doesn’t realize it) and that the scepter was merely a totem given to her by Lord Simultaneous to focus those abilities until she’s older and experienced enough to properly handle her gifts. Knowing this, Romero plots a scheme to obtain Renet’s spine, which he believes is the biological source of her power.

Romero sends his dino servant into the Turtles’ camp to steal a fish right in front of Renet. Renet chases the dino into the jungle, only to have her throat seized by the awaiting Romero. The Turtles follow, but Romero blows them away by squeezing Renet’s throat and focusing her powers into an earthquake. With the Turtles out of the way, Romero prepares to separate Renet from her spinal cord. Suddenly, Renet awakens and blasts Romero with a beam of energy. “Oh snap”, is all Romero can utter before he vanishes completely. 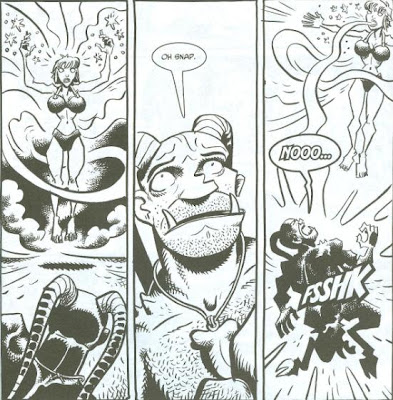 The Turtles recover and find Renet, who has no memory of what she’d just done. The Turtles don’t consider it a problem, so long as Romero is gone, and decide to head home.

At the beach, the little dino decides to use the time scepter as a fishing rod and ties a hook and line to it. He gets a bite, though the humongous fish proceeds to devour the little guy, time scepter and all, before scuttling back into the sea.

*The Turtles will encounter Savanti Romero again in TMNT (Vol. 1) #46.

*”Spinal Tapped” creates some discontinuity between Savanti’s previous appearance in Tales of the TMNT (Vol. 1) #7, where he was buried alive, and TMNT (Vol. 1) #47, where he explains how he was exhumed. One could postulate that when Renet zapped Savanti and made him vanish, she simply reburied him beneath the lake.

Although “Spinal Tapped” creates some continuity issues and probably wasn’t an entirely necessary tale (unless you were dying to know how the time scepter ended up inside that fish the Turtles caught), I still love it because of how cute and funny the whole thing is.

Lawson’s contemporary art style is much better suited to exaggerated comedy stories than grim and gritty action adventures, if you ask me (while his “classic” art style is much the opposite). “Spinal Tapped” is just a fun romp, reveling in Savanti Romero’s ineptitude as a villain and succeeding at that quality by presenting nearly the entire story from his point of view. Romero works best as a bad guy not to be taken completely seriously and the comedic elements are half the charm of the character. Lawson employs some limited “squash and stretch” cartoon physics, at least with exaggerated facial expressions and reactions, really setting the light-hearted tone of this story.

Lawson really has a good time with Romero in this one, as he’s just a riot to watch. There are so many quality panels of him looking utterly hilarious and absurd (shaking his fist angrily while lounging in a beach chair or sipping a beverage from a coconut with a tiny parasol in it), that I wish I could scan em all.

Romero’s little dinosaur servant seems to have been inspired by Gon, the star of Masashi Tanaka’s famous manga series of the same name. The little guy’s so cute and funny in his vacuous pantomiming that you kind of feel bummed out when he gets eaten by the fish at the end. Though it was a one-off partnership, I rather liked the dynamic between Romero and the little dino; they seemed like a perfect fit for each other.

“Spinal Tapped” isn’t flawless, unfortunately. Lawson still draws Renet with a rather homely visage and the sequence where she blasts Romero into the ether with energy beams from her mouth looks very, very clumsy. While a lot of fun, as I mentioned earlier, the story contradicts “Masks” rather blatantly and doesn’t really serve any meaningful narrative purpose other than to explain the source of Renet’s powers as being inherent. Talbot also makes a few unfortunate errors with the dialogue bubbles, having Raph’s lines come from Mikey in one panel and Renet’s lines come from Leo in another.

As of this moment, “Spinal Tapped” has only ever been printed once, in the 2007 Tales of the TMNT Vol. 1 trade paperback collection, which received a very limited print run and very limited direct market distribution. As a consequence, four years later, the volume can be very hard to find; often going for some pretty obscene prices on eBay. Now that IDW has the license to reprint older TMNT comic book material, “Spinal Tapped” may see a new printing down the line. But until then, while the story is a whole lot of fun, I wouldn’t say it’s worth paying the prices you would on eBay to get a hold of it.