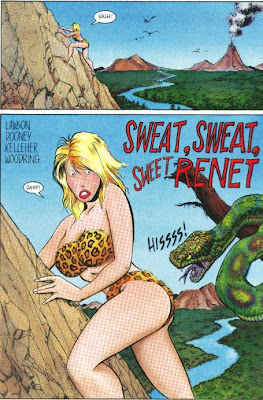 It is the age of dinosaurs and the leopard skin bikini-clad Renet is struggling to climb to the top of a steep cliff. Along the way, she is menaced by hissing serpents, vicious pteranodons and a very hungry saber tooth tiger. 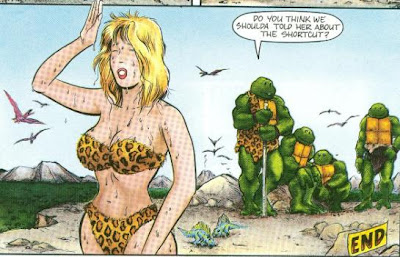 Eventually, after much sweat is perspired, Renet reaches the top of the mountain. There, the Turtles are already sitting and waiting for her. Quietly, Leonardo remarks to his brothers, “Do you think we shoulda told her about the shortcut?”

*The stories “Spinal Tapped” and “Meanwhile… 1,000,000 BC” also take place during that three month span of time.

By 1992, Jim Lawson’s art style was really taking a turn toward the aesthetic flavor we recognize it as today; a flavor not particularly appreciated by many. In “Sweat, Sweat, Sweet Renet”, a 3-page gag comic, Lawson’s stylistic choice really only damages one aspect of the story, as the anatomy, environments and ferocious fauna are all quite impressive-looking.

“Sweat, Sweat, Sweet Renet” seems to have been conceived as “fan service” meant to get leering comic book nerds hot and bothered, but if you’re going to draw such a thing then you’re primary motivating goal should be making the girl look attractive. Lawson’s pencils, combined with Dooney’s excellent coloring only proceed to make matters worse, as everything is painted with depth and tone… with the exception being Renet’s face. Again, her face is frying pan-flat and looks like it had a grade schooler’s interpretation of facial features doodled onto it with a marker. The end result looks distractingly unnatural and, once again, incredibly unattractive.

I think the worst offense comes on the last page, where Renet’s eyes are lopsided, Quasimodo-style: 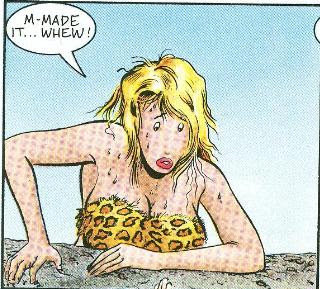 Grade: F (as in, “For the above reasons, Jim Lawson is an artist who works best exclusively in the province of black and white”.)
Posted by TMNT Entity at 12:10 PM