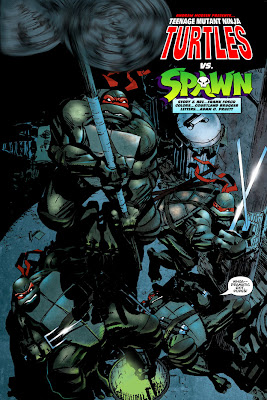 In the sewers beneath New York, the Turtles are running for their lives from something monstrous on their tails.

They escape through a manhole and into an alley. Mikey attempts to block the thing from following them by jamming the manhole with a trashcan. As the creature smashes into the trashcan, Donatello nails it with the manhole cover. Raph and Leo move in next, stabbing their weapons through the can in an attempt to perforate the beast.

Alas, all their efforts prove futile as the creature tears its way out of the trashcan, revealing itself to be… 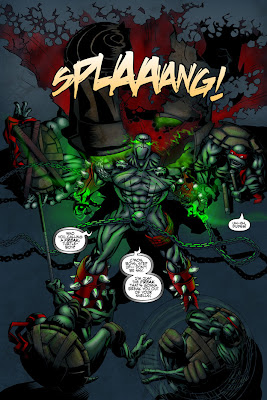 Now angrier than ever, Spawn encourages the Turtles to try that again, ready to “break them out of their shells”.

*Since the Turtles don’t feature any of their “mutilations”, this story likely takes place sometime before TMNT (Vol. 3) #1.

*This 5-page story was originally drawn by Frank Fosco in 1996 as his “try-out” for the artist job on Image’s TMNT Volume 3 series. It got him the job.

*The comic was never released to the public until 2011, when it was toned and lettered by Courtland Brugger and Adam O. Pruett, respectively, and independently published by Andrew Modeen as a back-up story in TMNT (Vol. 3) #24.

This was one of those moments that just felt like Christmas. In 2010, as a means of building up anticipation for the TMNT (Vol. 3) #24 project, Fosco released these pages in their original black and white form online and it was pretty fuckin’ sweet.

I’ll admit that Spawn has been a favorite character of mine since he debuted and I have every single issue up through #200 (I’m so ashamed!). I eventually stopped reading once they replaced Al Simmons with that amnesiac cracker, as he was really a boring character, but needless to say, Spawn holds a special place in my comic book nerd heart.

So seeing the Turtles fighting Spawn, and drawn by Frank Fosco no less, was a real treat for me.

I now have three versions of this story: the original black and white pencil/ink version by Fosco, the grey-toned version by Courtland Brugger and the fully colorized version (also by Brugger). The original pencil and ink version by Fosco is very much an incomplete “try-out” type of piece, with a lot of white space where backgrounds ought to be, focusing more on layout and character work. The colorized version by Brugger came next and it really is a sight to behold, as he adds all sorts of beautiful layers with his digital coloring prowess, particularly in regards to Spawn’s green glow growing ever brighter during the sewer chase.

The grey-toned version that eventually saw print in TMNT (Vol. 3) #24 appears to just be the colorized version in black and white, though it still looks gorgeous in any filter.

And kudos to letterer Adam Pruett for recreating Spawn’s distinctive speech bubbles. That’s a deal-breaker, right there, and I’m glad he remembered that particular detail.

How seriously this story is meant to be taken depends on you, considering it was just a 5-page “try-out” piece not originally intended for public consumption. But something this cool deserves to be shared and I’m grateful to Fosco for digging it out and grateful to Modeen for publishing it.

Grade: A- (as in, “And this is why the Fred Wolf Turtles’ fighting strategy of ‘throw a trashcan at it’ just wouldn’t work”.)
Posted by TMNT Entity at 1:52 PM