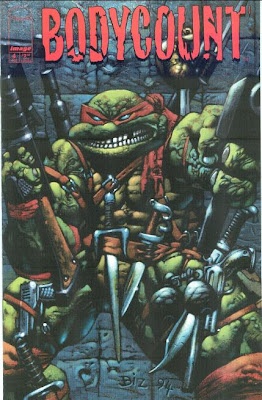 At the “sanctuary”, Raph and Casey are stuck in the middle of a three-way gunfight between Johnny’s men, Martin’s men and Dong’s men. The thrill of letting go with machinegun fire has completely overtaken Raph’s senses and he leaves himself open to a shot from Johnny. Casey nails Johnny in the arm with a golf club, sparing Raph, but in retaliation, Johnny shoots Casey through the heart. As the firefight moves away, Raph rushes to Casey’s unconscious body. 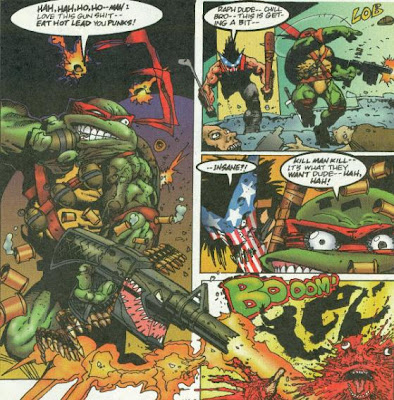 Outside, Agent Bode’ of the FBI threatens to take command of Detective Choy’s men if he doesn’t intervene soon. Choy has his hulking brute sidekick, Hector, lay Bode’ out with a punch (snapping Bode's neck). Choy plans to let all three sides wipe each other out so that all he need do is clean up the mess.

As Johnny makes his way to Martin’s throne room, he’s met by Midnight (wearing nothing but conveniently distributed straps of elastic for some reason). Midnight tries to reason with him and explain the situation. Dong had masterminded the entire scenario in an attempt to consolidate all underworld power under his and Martin’s rule. Dong was afraid Johnny was getting too good and teamed with Detective Choy to tip-off the raid at Shakkur’s. He then fingered Midnight as the snitch and hired Johnny to kill her, knowing that the chase would lead back to the “sanctuary” where an ambush would be waiting. Martin backs Midnight’s story up, though he reveals that his part in the plan didn’t go off as intended. He wanted the “sanctuary” to be a arena where only those involved in mob matters had to fight and die, thus eliminating the deaths of innocent bystanders in gang hits. 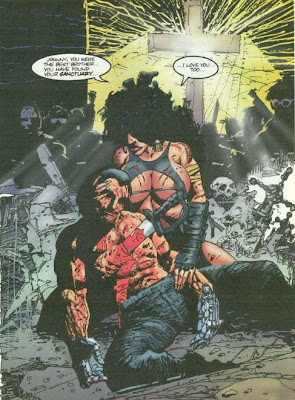 Johnny isn’t having any of it and, throwing down his guns, agrees to fight Midnight in a sword duel in the arena. The two go at it and Midnight proves victorious, stabbing Johnny through the stomach. Johnny tells his sister he loves her and dies in her arms. Midnight returns the sentiment to her departed brother.

In another room, Casey comes to. The bullet from Johnny apparently imbedded in his lucky Wayne Gretsky hockey puck! Martin orders his men to shoot them both, but Raph gives an impromptu speech about the beauty and the ugliness of guns, that he’s now seen them both, and some other stupid shit, and the speech moves Martin to call his men off. Suddenly, an alarm on Martin’s watch goes off, reminding him that the “sanctuary” is about to explode for some dumb reason. Everyone escapes as the church detonates right in Choy’s face. Johnny’s smoking cybernetic limb lands in Choy’s lap and the detective realizes he’s screwed the whole operation up. 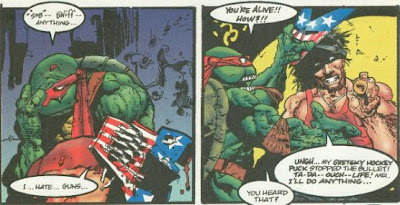 Outside the smoking ruins of the “sanctuary”, Casey and Midnight smooch (as Raph gags) and then agree that they aren’t right for each other, parting ways.

Back in Hong Kong, Dong is sure his plan has gone off without a hitch; that is until he receives a package from Choy containing Johnny’s limb and an apology note. Dong is not pleased.

Two days later, Casey and Raph decide it’s time to head back to New York as they buy some hotdogs from two familiar guys (Choy and Hector, who are in hiding from Dong’s men and the FBI). Raph apologizes for getting all whacked-out on gun-lust, but Casey says it’s cool. They then begin the long hitchhike home.

*This issue is continued from Bodycount #3.

The best thing about reviewing this series is the comfort in knowing I’ll never ever have to read it again. Ahhhh, peace of mind.

I think the worst thing about this finale isn’t the eye-rolling fake-out with Casey’s “death” (which was resolved so sloppily; that puck was never even mentioned as existing in a previous issue) or Raph’s idiotic “losing his mind in gun-lust” moment (which fuels an equally idiotic speech at the end of the story), but just the absolute crapload of exposition at the end during the showdown between Midnight and Johnny.

It goes on and on and on and on for TEN PAGES. You see, none of the myriad of plotlines in this miniseries were properly developed in any capacity; taking a backseat to the merry-go-round of gun-fighting. So you can tell that Eastman suddenly realized, “Oh wait, none of these arcs coalesce in the slightest. Oh well, that’s what monologues are for!” Both Midnight and Martin explain at length every nook and crany of Dong’s master scheme, with only Johnny’s “Shut up! I don’t believe you”s to punctuate their rambling. And no matter how many times I read it, the scheme that apparently fueled this entire travesty of a miniseries still refuses to make sense.

But who cares? You can kinda sorta see the edges of Midnight’s nipples. That’s good comics!

By this point in the series, you can tell that Bisley has thrown any attempt at seriousness out the window and the art becomes as surreal and wacky as an issue of MAD Magazine. Outside of the primary cast, the entire universe appears to be populated by grotesquely deformed caricatures of human beings. It certainly makes the panels interesting and adds a jovial tone I don’t think Eastman had in his script (something tells me Eastman thought he was playing this straight while Bisley knew to do otherwise). There are some cartoonish effects near the end, as cherubs nail Casey and Midnight as they smooch, too. The lunacy of this entire series would make me want to write it off as an alternate universe “comedy” piece, ala the issues of TMNT (Vol. 1) by Mark Martin or Hedden & McWeeney, but the fact that this acts as the origin for Casey’s star-spangled hockey mask from the Image series means it actually has an impact on the overal narrative of the book. An incredibly, incredibly miniscule impact.

My dislike of Bodycount is no secret, especially if you’ve read the last three reviews. It’s a very shallow book that’s amusing at best and a complete waste of money at worst. It’s little more than another excuse out of a hundred for Eastman to get an artist to draw his wife in leather straps for him, and while it isn’t as obnoxious a vanity piece as “Heavy Metal 2000” (where the two main characters were caricatures of Julie Strain and Eastman-himself), it’s still pretty transparent in its egomania.

Inexplicably, this miniseries has been collected in trade paperback twice, first by Image in 1997 and then again by Heavy Metal in 2009 (in soft and hardcover formats). Be wary if you plan to buy the Heavy Metal printing, though, as it is missing a page, repeating the same one twice by mistake.

If you’re a completionist or you really truly care how Casey got his star-spangled hockey mask, or if you’re a sucker for Simon Bisley artwork, then I suppose you should give Bodycount a go. But I wouldn’t recommend it.