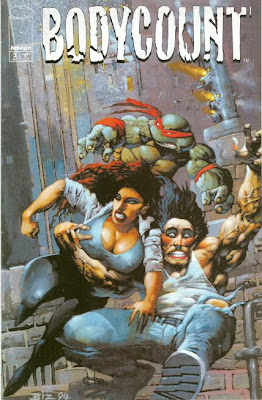 As Johnny works his way through Club Dead, Court leads Midnight, Casey and Raph to the roof for their escape. Raph offers to cover their rear, grabbing a machinegun and losing himself in the thrill of blowing enemies away with red hot lead. With Johnny Woo ducking for cover, Raph leaps down to the ground and escapes with Court and the rest. Johnny is pissed and, after shooting down a police chopper, decides to wait for his prey at the “sanctuary”. 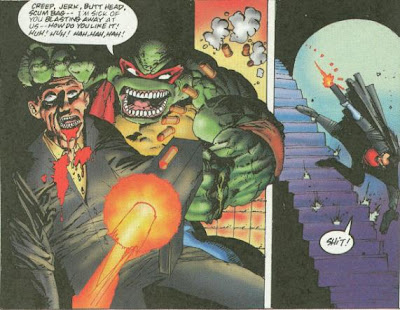 Detective Choy then arrives at the burning ruins of Club Dead. Horrified at Johnny’s handiwork, Choy decides to set up a stakeout at the “sanctuary” for him.

In a diner at Pittsburgh’s Lower East Side, Court comes to the conclusion that none of his goons survived since no one else has shown up at the meeting place. Leaving, Court agrees to take Midnight to see the mysterious Martin at the “sanctuary”.

In Hong Kong, mob boss Dong has a plot to finally solidify his power over the global underworld and he need only double-cross Johnny Woo Woo to do it. Dong then dispatches a unit of his men to the “sanctuary”. 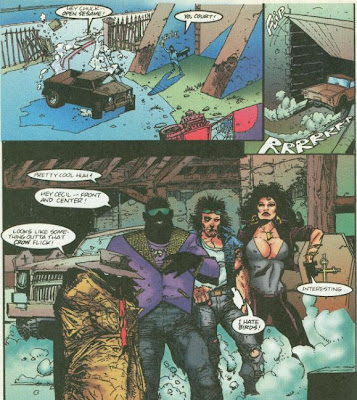 At Pittsburgh’s South Side, Court pulls into an abandoned church. Ushering Midnight, Casey and Raph in through a secret door, they’re met by a nutty spiritual leader named Martin who has foreseen Midnight’s coming and her great role in events that are about to unfold. He then encourages them to arm themselves with what provisions the sanctuary has to offer. Midnight and Raph load up with guns, while Casey finds himself some hockey sticks and a star-spangled hockey mask. 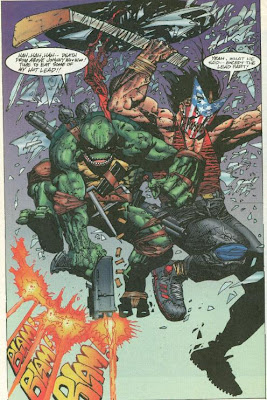 Johnny and his gang finally arrive and drive their van straight through the front door. Detective Choy decides to hold off on sending his men in, as he spots Dong’s Hong Kong crew storming the church. As Johnny shoots through Martin’s thugs, he’s suddenly surrounded by Dong’s troopers. Johnny’s confused, and even more so when Raph (guns a-blazing) comes dropping down through a skylight with Casey (in full-on vigilante mode) in tow.

*This story is continued from Bodycount #2. The story concludes in Bodycount #4.

*Page 1 of this issue is the same as the last page of the previous issue.

*Jason Voorhees can be spotted in the background at the Lower East Side diner.

You ever see one of those old Looney Tunes shorts where a mad scientist or a mob boss has a neon sign over his cleverly secluded joint reading “secret hideout” in big, bright, blinking letters? Well, that’s just about the only thing the “sanctuary” was missing. What good is a super secret gangster base in South Pittsburgh when even some cop from the other side of the planet knows where it is? Sheesh.

I think one of the more offensive things about this storyline is Raph’s sudden, inexplicable gun-lust. Of all the Turtles, I can see Raph as being the least hesitant to use a firearm (aside from perhaps Donatello and laser pistols, I guess), but the way the whole thing is carried out in Bodycount is preposterous. One flipper on the trigger and Raph immediately becomes a cackling, drooling, blood-thirsty maniac. It’s hard to pick out any particular moment of stupidity from this miniseries as eclipsing all the others, since “Bodycount” is four consecutive issues of nonstop stupidity, but this element stands above the rest every time I suffer through the thing.

The formula of “Johnny attacks, they run away, Johnny attacks again” continues into this third issue, though it at least leads into the final showdown that will unfold in the next chapter, so we won’t have to endure any more of that merry-go-round nonsense from this point forward. In place of it, we’re now saddled with two shallow outside groups in Choy and Dong who have been plucked out of the blue just for the sake of making the finale’s gun battle even bigger. Choy’s motivations have the benefit of actually existing, though in a manner evident only through trite exposition, “We have fought many battles Johnny Woo! Woo! But today – I end the war!” Yes, Lavigne did indeed put those exclaimation points there. Woo! Woo!

Meanwhile, Dong’s plan to gain complete global underworld control by… having his men attack his best and most loyal hitman… makes positively no sense. I do not understand why such a half-baked plot point was necessary. Oh well, it leads to more bullets and explosions, so who cares? It’s like Kevin Eastman is the Michael Bay of comic books, I swear…

If it’s any comfort, there’s only one more issue of this crap to go.