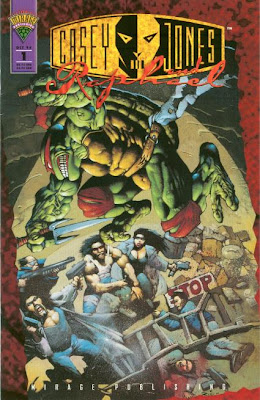 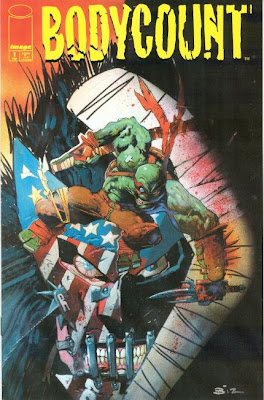 At a bar in New York City, a massive brawl has broken out amongst all the patrons. Casey Jones is in the thick of it, pitted against a rather large and imposing fellow. Outside, a distraught woman is on the run when she passes the bar and is smacked by the flying carcass of Casey, whom the big gentleman has sent hurtling through the window. After taking a few licks from the irritated female, Casey gets back up and runs back into the bar for Round Two. 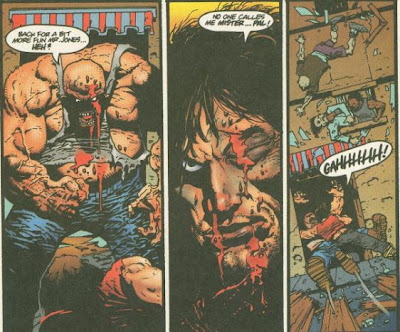 The woman, named Midnight, is cornered in an alley by her pursuer: cyborg hitman Johnny Woo Woo and his gang. Apparently, Midnight and Johnny were an item back in Hong Kong, but during a botched hit on a gangster named Shakkur, Midnight was forced to ditch the getaway car when the police arrived. Made the scapegoat for the hit’s failure, Midnight has become Johnny’s next assassination target. 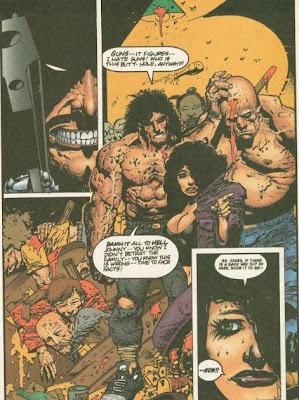 Midnight escapes into the chaos of the bar brawl, accidentally bumping into Casey’s playmate. The big guy gives her a mighty smack, which she responds to by knocking him senseless (impressing Casey in the process). Johnny and his gang burst in, demanding Midnight give herself up. Casey steps to Midnight’s defense and Johnny’s goons proceed to open fire, killing everyone in the joint. Casey and Midnight escape out the back but are cornered in an alley. 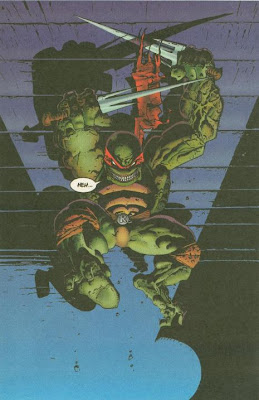 Johnny prepares to execute them when a fire escape ladder falls off its hinges and flattens his goons. Raphael then leaps down from above and disarms Johnny. The two tussle for a bit until Midnight lays Johnny out with a block of wood. Midnight then encourages Casey and Raph to make a getaway with her before the cops show up. As they flee, Johnny digs his metal fingers into the concrete, furious.

*The story continues in Bodycount #2.

*Due to Casey’s “swinging bachelor” status, this story must take place sometime before he met April in TMNT (Vol. 1) #10. Personally, I think it fits in well-enough with Eastman’s other Casey and Raphael “bonding” stories from early in the timeline, such as “Fun with Guns” and “Complete Carnage ‘N Radical”.

*"Bodycount" was initially released as “Casey Jones & Raphael” by Mirage. After the publication of the first issue, however, plans began for all TMNT comics to be published by Image. As a result, the completed miniseries was shelved for a year and then released under Image as “Bodycount”.

*The cover for Bodycount #1 says the issue was released in February of 1996 while the indicia cites March of 1996.

*The credits page for Casey Jones & Raphael #1 mistakenly attributes the pencils to Kevin Eastman and the inks to Bisley. The Bodycount #1 printing corrects this, attributing the pencils and inks to Bisley and the layouts to Eastman.

Kevin Eastman and Peter Laird are like Yin and Yang; their storytelling sensibilities and genre preferences go great when paired together, but when left to pursue their own projects individually, well, they suffer from an absolute lack of balance. For my in-depth thoughts on Laird’s side of the coin, see my inevitable review of TMNT (Vol. 4) #1. Here, I want to discuss Kevin Eastman.

Kevin Eastman is the current editor of Heavy Metal magazine and it shows in all his work. He comes from the school of comic book “shock” artists like Frank Miller, though even at his best, Eastman has always rubbed off closer to the contemporary nigh self-parody version of Frank Miller we’ve come to know rather than the classic, prime of his career Frank Miller we’d all like to remember. Kevin Eastman likes blood. Kevin Eastman likes boobs. And Kevin Eastman likes cursing. Perhaps to the detriment of all else. His concept of “mature” storytelling is mature in its content, I suppose, at least from a “Rated R” perspective, but it is a very juvenile interpretation of “maturity”.

So, again, in that regard, Kevin Eastman is the perfect person to run Heavy Metal magazine. “Blood, boobs and cursing” is pretty much all they do in that rag (which I admit I subscribed to and enjoyed for many years).

With that in mind, the Bodycount miniseries is pure, unfiltered and unhindered Kevin Eastman. When given carte blanche to do a Turtle story his way in any manner he wants, he delivers something I imagine only a middle schooler would react to as “cool”. It’s got blood. It’s got boobs. It’s got cursing. And absolutely nothing else.

Eastman has described Bodycount as his and Bisley’s ode to John Woo (made painfully evident in the character of “Johnny Woo Woo”), intended to be “the longest running gun battle in comics”. They certainly succeeded in that endeavor. There’s a lot of guns, there’s a lot of running and there’s a Chinese guy named Johnny Woo Woo. If that’s all they were going for then I suppose one can hardly hold the end result against them. When you make a comic paying homage to one of the shallowest filmmakers in all of Hollywood, you’re invariably going to end up with one of the shallowest comic books to ever hit the racks. For better or worse, Bodycount certainly is an accurate reflection of John Woo’s cinematic “masterpieces”.

While the story seems culled from every 13 year-old’s fanfiction and the dialogue is guaranteed to make you cringe (“Move legs, move!”), the major selling point of Bodycount is Simon Bisley’s brutal, busy, basically badass art. Looking through my comics collection, I have very few full issues drawn by Bisley, and even fewer multi-issue stories; to me, he’s always been little more than a cover and pin-up artist (his covers for Topps’ “Jason Vs. Leatherface” miniseries being especially awesome). Being able to finally see what the man is capable of in terms of storytelling is quite a treat and his highly detailed art does not disappoint. The layouts were done by Eastman, who in addition to being an excellent artist is an excellent layout man, too, so the action flows very smoothly from page to page. Which is a good thing, since this is all action all the time. I think Bisley shines most during the bar brawl pages, as everyone in the house is fighting and there hardly even seems to be any gravity in the joint, ramping up the drunken, belligerent atmosphere.

Bodycount is not one of my favorite TMNT stories, which is a shame since I almost always enjoy a good Casey and Raph adventure. Even worse; I’ve still got three more of these things to go. Bodycount is all flash and no substance, and if that’s the sort of thing you’re in the market for, then you could do worse than this mini, I suppose.

Grade: D- (as in, “Dammit, I just realized that Eastman modeled Midnight after his wife, Julie Strain. Not as gratuitous as ‘Heavy Metal 2000’, but still distractingly annoying”.)