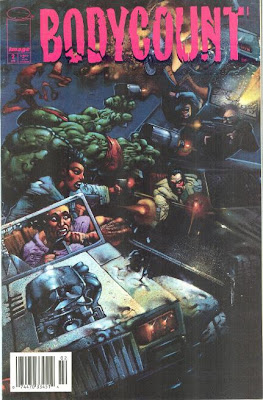 Hiding out on a pier, Midnight explains her situation to Casey and Raph and that they must help her reach “sanctuary”. Raph is reluctant, but Casey just can’t say no to a nice big pair of… eyes. After picking up some old Halloween costumes for disguise (Casey dressed as Slash from GnR, Raph as a hobo and Midnight in a sundress and hat), they head over to a locker in Grand Central Station where Midnight has stashed some “supplies”. Johnny and his gang arrive and begin shooting up the joint. Midnight returns fire with her “supplies”, though Casey refuses to take a gun. Raph, meanwhile, grabs a grenade, stuffs it in a hotdog cart and sends it rolling toward the mobsters. The explosion gives our gold-hearted protagonists time to steal a Jeep and make their getaway. 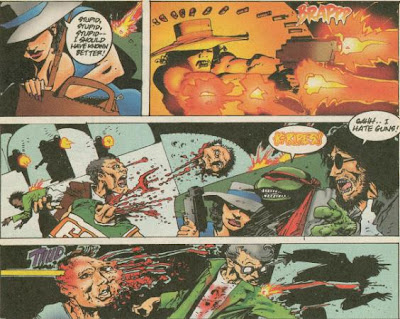 At JFK Airport, Detective Choy arrives and demands to speak to the Mayor about Johnny Woo Woo.

Over at a gas station, Raph continues to tell Casey he doesn’t trust Midnight, while Midnight (going to the bathroom; this book gets classier and classier) feels regret for dragging the two boys into her mess. Then, surprise surprise, Johnny attacks! Again. As they escape in their Jeep, Midnight blows up the gas pump, killing most of Johnny’s henchmen. Johnny pursues in his car, but a few shots from Raph (who finds he can use a gun by breaking off the finger guards) and some well-placed grenades sends Johnny’s car flying off an overpass and onto a truck. Casey, Midnight and Raph then head for Pittsburgh. 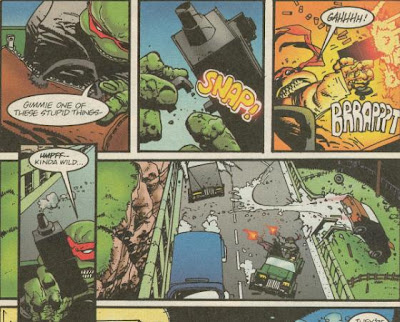 Back in New York, Detective Choy learns from the Police Chief about the gas station explosion. Reports had Johnny stealing a truck and heading towards Philadelphia after Midnight (wait, I thought she was going to Pittsburgh?). Choy hooks up with Agent Bode’ of the FBI and gives chase.

Driving, Johnny recalls his meeting with mob boss Dong after the botched hit on Shakkur. Apparently, Dong’s son was amongst the mobsters killed when Midnight abandoned the getaway car and the police attacked. Dong believes Midnight to have been in cahoots with the law. Johnny doesn’t want to believe that Midnight set him up, but takes the hit anyway.

In either Pittsburgh or Philadelphia, Midnight leads Casey and Raph to “Club Dead” for a meeting with her old friend, Courtney. Court understands Midnight’s situation and wishes to help her reach “sanctuary”, but thinks that relocating his men before Johnny Woo Woo arrives would be a good call, first.

Then guess what happens? 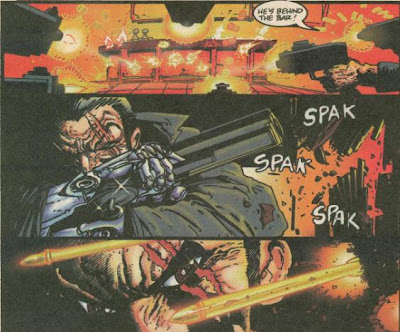 Johnny Woo Woo arrives and shoots everybody. Again. Midnight, Casey and Raph hear the noise, though Court’s men are certain that Johnny won’t be able to survive their barrage of bullets. Johnny not only survives, but hurls a hand grenade while he’s at it.

*This story is continued from Bodycount #1. The story continues in Bodycount #3.

*Agent Bode' is named after Vaughn Bode', a favorite artist of Kevin Eastman's.

That is the entire formula for this four-issue miniseries, sometimes looping through the cycle three or four times per issue. It is one of the most monotonous comics I have ever read.

Though there’s no excusing such an obnoxious formula, part of the problem comes from condensing the series from five issues to four. The cliffhangers now appear six pages before the end of the issue and the actual end consists of a rather uneventful panel that was never intended to close a book. The extra six pages also means the formula, probably meant only to cycle through twice per issue, gets a third helping, making it really, really irritating.

Bisley’s art continues to be this book’s one saving grace, with the ultra violence in the big shootout scenes being hilariously overthetop (victims seem to straight up melt with the impact of each bullet). He also nails some great expressions early in the issue, particularly on Raph as he gags at Casey’s head-over-heels reaction to Midnight. Interestingly, Bisley draws Raph with the belt buckle initial of the Fred Wolf cartoon and Archie Comics TMNT; the Turtles never had those stupid things in the Mirage comics. A bizarre little detail.

Erik Larsen’s editorial blurb and answers in the issue’s letters column seem rather contradictory, as I read them. In the opening blurb, he sings the praises of Bodycount, “This is Kevin Eastman’s baby. He took his favorite Turtle, Raphael and teamed him up with Casey Jones and the legendary talent of Simon Bisley to bring you what may very well be the best work of both their careers. To say I’m knocked out by the results is the understatement of the decade! I can’t wait to get more pages and every time I think it can’t get any better, more pages come and I’m proven wrong yet again!”

Later, a Richard Rosenbaum of Toronto, Canada, makes clear his concern with the Turtles moving to Image Comics (where they’d have their third volume published). He says, “I’m just a little concerned that moving to a major comic company like Image will let the Turtles degenerate into one of those one-battle-per-issue, no character development, X-cup women superhero books that there are already thousands of on the shelves”.

Larsen then sarcastically replies, “Oh man, degenerating the Turtles into one of those one-battle-per-issue, no character development, X-cup women superhero books was my number one priority for the book – now I’ve got to think of something else. Thanks a lot”.

Just a heads up, Larsen, but that is exactly what Bodycount, “the best work of Eastman’s and Bisley’s careers” happens to be (albeit, it has five-battles-per-issue). Are we reading the same comics, here?

Anyway, the best part of this entire issue was the advertisement for TMNT (Vol. 3) #1 that I found positively hilarious: 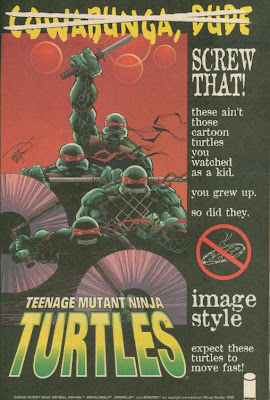