Christianity Vs. The Ninja Turtles 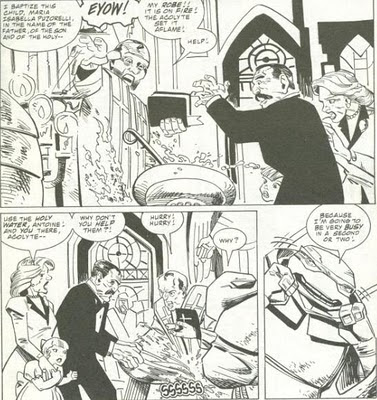 I have this philosophy: “No matter what it is that you do or say, there will always, always be someone somewhere who will find it offensive”.

Bearing that in mind, I’d like to present a rather more controversial article than TMNT Entity is used to, as we explore a brief span of time between Spring of 1991 and September of 1992 when several Christians from around the United States thought that the Teenage Mutant Ninja Turtles were messengers of The Devil.

As a necessary disclaimer, I’d just like to state that I have no religious or atheist agenda going on here. I’m an apatheist if you absolutely have to label me (my philosophy on the afterlife or potential lack thereof: “I’ll find out when I die”) and I am well aware that not all Christians behave the way the ones highlighted in this article do. I’ll do my best to avoid blanket statements; my intention is only to point out a rather bizarre period of time in Turtle history when the brand was accused of promoting Satanism and “New Age” paganism.

Now back on track, the majority of complaints about the TMNT’s lack of Good Christian attitudes came in regards to the media geared toward children; such as the Fred Wolf animated series and, most notably, Archie’s TMNT Adventures comic book. A large number of Christian parents, and even children, found the non-Christian terminology such as “Zen” and non-Christian practices such as meditation to be offensive and accused the powers that be of trying to stray their offspring or siblings from the One True Path of Jesus Christ.

The first accusation that the Teenage Mutant Ninja Turtles were purveyors of sin that I can find came from the letters column of TMNT Meet Archie #1, published in Spring of 1991.

From Andy Parker in Healdton, OK:

"I used to be a big fan of your characters the Teenage Mutant Ninja Turtles. But when they started talking about New Age junk (like when Michaelangelo in the cartoon said, "...you gotta be totally zenned out.") that really turned me off. As a responsible young Christian, I will not pollute mine or my 6 year old brother's mind with this stuff. PS - Read your bible; it works wonders."

Author of the series Stephen Murphy (under the pseudonym “Dean Clarrain”) was always tactful with his replies to these letters, which I’ll include in addition to the hate mail.

Murphy’s reply: “Sorry you feel this way, Andy. However, Zen is not ‘New Age’ – in fact, Zen was brought to China from India in the sixth century, later finding its way to Japan in the twelfth. It has been described as: ‘A special teaching without scriptures, beyond words and letters, seeing directly into one’s nature. Zen is not a sect, but an experience. In all, it is but another way of looking at the world.’ Wasn’t meant to offend, dude.”

Two deeply offended individuals then had their letters published together in TMNT Adventures #28, in January of 1992.

From Daniel Glassner in Louisville, KY:

"I like your fighting but I don't like the meditating. I think it's Satanic so I haven't bought any of your comic books for a while now. I am asking that you take out all the meditating now, thanks."

From Matt Fried in Lambertville, MI:

“Hi, Dudes! I think you are cool but in issue 23 there is a mutant that has three eyes. In the Bible it says that three eyes are a symbol of the Devil! I’m not saying that I don’t like you dudes but try not to write and draw that junk, ok?” 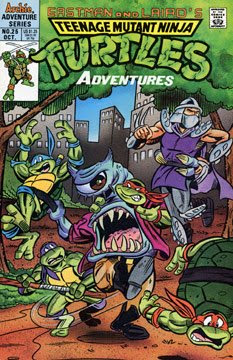 In June of 1992, another letter graced TMNT Adventures #33’s pages, this one from a confused lad who could not reconcile Japanese mythological creation stories with the history of creation taught in his Bible.

From a Joshua Lewis in Encino, CA: 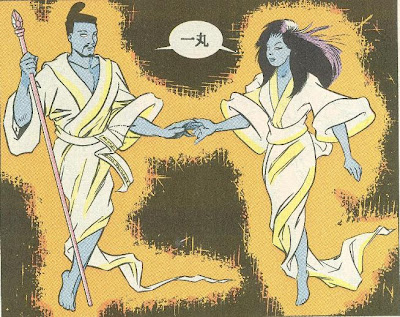 Murphy’s reply: “In Japanese mythology it was the blind god who gave up each one of his eyes in order to make the sun and moon. According to Christian belief it was God who did so. Either view can be true depending upon which belief system one follows, understand?”

The last letter from an offended theist that I could find came in TMNT Adventures #36, published in September of 1992.

From Janet Blomberg in Ogema, WI:

“I recently purchased several TMNT Adventures comic magazines for my sons. As I read through one (issue 33) I was greatly offended at its content. The title of the adventure was 'The Karma of Katmandu'. New Age and Buddhist rhetoric and subject matter filled the magazine. I along with a vast number of parents strongly object to this type of imagery filling our childrens’ minds. Never again will this mother purchase one of your comic magazines without carefully previewing it. I plan to inform my friends of the content of this magazine so they too are aware of what I perceive to be brainwashing of our children. Please consider my point of view and keep this type of content OUT of your comic books and cartoons.” 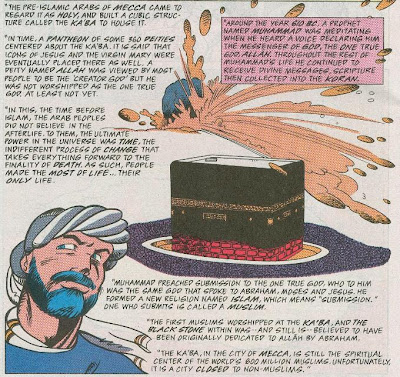 Murphy did not dignify this letter with a response.

Incidentally, the unifying theme of these letters seems to be the mere presence of other religious and cultural beliefs within the comic, as though spiritual practices that defy Christianity are something vile and meant to be hidden away from the eyes of impressionable young children.

For whatever reason, there are no more letters of this variety published at all for the remainder of the series (as a matter of fact, the back half of TMNT Adventures has scarcely any letters pages). Either the Christian audience offended by the book stopped writing complaint letters or Archie Comics simply opted to no longer publish them. I imagine the latter is the likeliest scenario.

The offended letters published between ’91 and ’92 came at a time where the book was dealing with a “world tour” arc across Japan, Tibet and Iran, focusing on mythological Japanese beliefs and delving into Buddhist and Muslim practices. The book always presented these differing religious viewpoints tastefully; using the title as a means to educate young readers about other cultures, not “brainwash” them into any particular theistic disposition.


But criticism of the Teenage Mutant Ninja Turtles’ non-Christian behavior extended further than just Archie’s TMNT Adventures comic book, with complaints slung at the cartoon and feature film series, too. A pair of “critical analysis” publications were released in the 90s by authors Phil Phillips and Joan Hake Robbie titled, “Teenage Mutant Ninja Turtles Exposed!” and “Saturday Morning Mind Control” (the latter of which covered several cartoons of the 90s, with a heavy bias against TMNT).

These books were written in the style of other anti-media Christian literature of the era, in the vein of Phil Phillips’ more well-known book, “Turmoil in the Toy Box”. Reactionary publications of this variety all owe a debt of gratitude to much earlier sensationalist journalism, most notably Fredric Wertham’s “Seduction of the Innocent”.

“Jester” over at TMNT blog Go Green Machine! has taken the time to look at some choice quotes from both books, and if you thought those TMNT Adventures letters were harsh, you should check some of these out.

So as not to duplicate Jester’s article, I’ll only highlight a few of my favorites. “Eastern Religions – Krang is the spiritual leader to Shredder. Krang speaks from his middle (stomach) where a demonic-like figure is visible.”

“Sex – In the Archie Comics April O’Neil is seen as a voluptuous and sexy female. In the movie O’Neil’s skirts are so short (or she is wearing shorts that they reveal her legs almost to the top of the thigh). Should our children see women as only sex images?”

“Darkness - The movie (which is rated PG and is recommended for 4-12 year-olds) takes place in the darkness where “night action” occurs. Children are prone to be scared of the dark. Many evil deeds take done in the darkness. The Bible says…men loved darkness rather than light because their deeds were evil (John 3:19)”

“Meditation – The Ninja uses meditation to obtain physical power and “inner strength.” Meditation is a religion that does not accept Jesus Christ, The Messiah, as the one true God.” 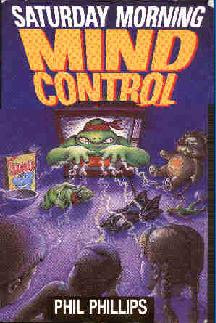 “As a gang of four, they have a look, a code language and mutual love of pizza, a share religion (ninja), and a wise older guide who is not part of a true family unit.”

“In the animated series, Splinter frequently is shown in a classic lotus position, with a large Yin/Yang symbol behind him on the wall, as he counsels the Turtles. Ninja is based on an ancient religious practice called Kung pau in the cartoon. In history, this early religion, which employs one of the earliest mind control techniques known, is called ‘kujucurry.’ Splinter often lays his hand on his head as he communicates with the Turtles, indicating a mind control technique at work…”

“The turtles recent movie was rated PG, but the day I saw it in a theater outside Dallas, at least half the audience was in the three to six year old range. The movie is filled with curse words, has a reporter who dresses like a hooker, and is extremely violent…”

I’ll let you determine how factual the observations of Phillips and Robie are for yourselves.

In closing, it seems that in every generation there is a popular giant of children’s media singled out for its supposedly anti-Christian content by a vocal minority of the religion. These days, the “pagan” content of Harry Potter is the thing to rail against, but back in the early 90s, it was TMNT, and primarily because it dared to show kids that other cultures and religions outside Christianity simply existed. 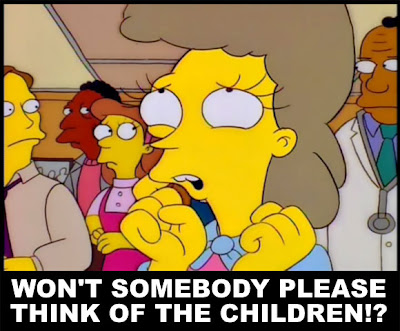