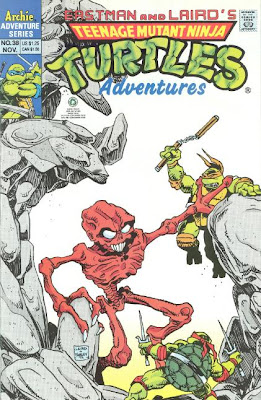 “United we Stand, Divided we Fall: Part One”

Flying back to Earth inside Cudley the Cowlick’s mouth, Splinter registers his dissatisfaction with the cleanliness of their transport. Mike assures him that a few minutes in Donatello’s sewer Jacuzzi will wash all the spittle away. Ninjara, though, finds the thought of living in a sewer to be positively disgusting. 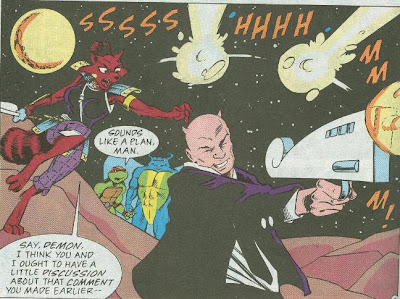 Suddenly, Cudley drops off the Turtles, Splinter and Ninjara, who spring into action. As they bash the Robo-Skeletons, the Mutanimals awaken and rejoin the fight. Azrael’s escape is interrupted by Cudley, who leaves for Stump Arena in response to an emergency. Her brief pause is all Null needs, as he knocks her out and carries her through a secret passageway into the temple. Inside, he is greeted by the Grim Reaper and his three shadowy cohorts. He leaves the fight to them. 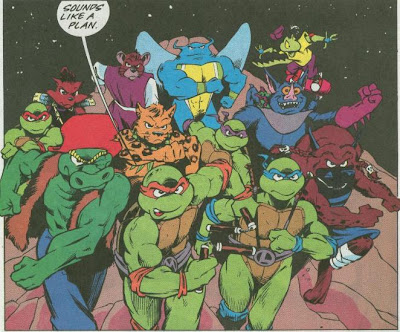 Back at the battle, Leatherhead finally recovers and, enraged, takes out the last Robo-Skeleton. Blessed with a brief intermission, the Turtles and the Mutanimals shake hands, happy to see one another again after so long. Man-Ray brings them up to speed on the quest the Mutanimals have been following that led them to the skull temple. Apparently, the Grim Reaper and Null have found a way to wipe out rain forests in an instant, leaving behind nothing but desert. Worried about the effects such deforestation would have on the global ecosystem, the Turtles and the Mutanimals decide to get to the bottom of things. 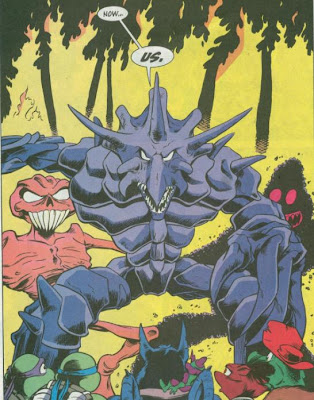 Suddenly, a plume of smoke rises from the edge of the nearby rainforest and the heroes leave to investigate. They find a quartet of zombies in business suits setting the trees ablaze. Dreadmon and Jagwar hack the zombies to pieces, but they were only the appetizer. The main course then steps out of the flames: Three huge, lumbering monsters of bizarre design.

*You'll find out why Cudley was recalled to Stump Asteroid in TMNT Adventures #48.

*Wingnut mentions his prosthetic wings being destroyed by a giant snake, which happened in Mighty Mutanimals #2.

*This issue was published in the UK by Fleetway as TMHT Adventures #73.

The “United we Stand, Divided we Fall” arc always gets something of the shaft in the memories of TMNT Adventures readers; myself included. It has the misfortune of being the big story arc immediately preceding the next big story arc: “The Future Shark Trilogy”. “The Future Shark Trilogy” happens to be one of the most well-known and well-received arcs of the entire series, as well as the means of a new direction in storytelling that would last the remainder of the volume. As such, “United we Stand” tends to vanish in its shadow.

But “United we Stand”, forgotten though it often is, remains a pretty major piece of storytelling for the book. This was the big event that the Mighty Mutanimals on-going series had been building up to for five straight issues. True, TMNT Adventures didn’t really have anything to do with the build-up to this three-parter, making it seem like a gratuitous crossover to try and raise faltering sales in the Mighty Mutanimals book, but their presence allows for grander battle sequences and, well, invites Chris Allan to draw the action. That’s always good.

It’s easy to forget that during the battle with Queen Maligna and the formation of the Mutanimals, only Raphael was present; the other Turtles and Splinter being left behind in New York to stumble through filler plots. So for them, this is actually the first time they’d gotten to see some of the Mutanimals since as far back as TMNT Adventures #13. As such, the big two-page spread of the Turtles and Mutanimals happily reuniting was a great piece, with Allan really nailing their expressions.

And once again, Null illustrates just how much he loves punching women in the face. He’s just so evil about it, too, particularly in the exchange of dialogue as Null surprises Azrael; “I feel so helpless…”, “Helpless? Really?” POW!

I was rather surprised at the red blood dribbling from Leatherhead’s nose after the Robo-Skeletons knocked him senseless. Barry Grossman usually colored blood any color he could but red (most often going with black). Just look at the scene where Dreadmon and Jagwar shred the zombies; they’re filled with purple fluid for some reason. You won’t be seeing much red blood in this series, so savor it while you can. 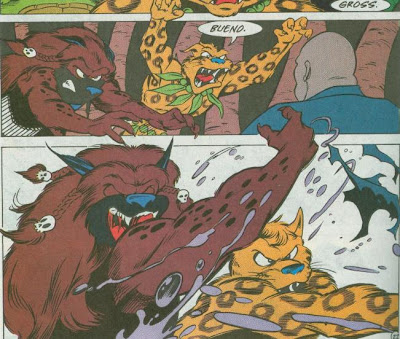 Even though the sudden plopping of a Mighty Mutanimal’s arc in TMNT Adventures is a bit distracting, if you’ve been following both titles then you shouldn’t be too disoriented. And even if you haven’t been reading TMNT Adventures' sister title, just look at it as one more crazy situation the Turtles have been dropped into and it’s no more an unusual or distracting plot point than when they found themselves unceremoniously dumped in South America to stop an illegal shrimping operation. Only way cooler.

Grade: B (as in, “But Allan draws a far less jovial Grim Reaper than Kazaleh, that’s for sure”.)