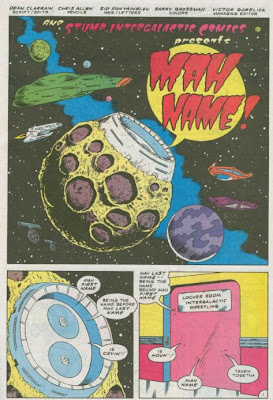 In the locker room of the Stump Intergalactic Wrestling Arena, wrestlers Ace Duck and Trap suffer through Cryin’ Houn’s endless mantra of “mah name is Cryin’ Houn’”. Stump and Sling then barge in, introducing the wrestlers to a little alien boy named Nobbie Bulkhead (whose name they mispronounce as both Stubbie and Chubbie Milkweed). He’s the winner of an essay contest and the wrestlers have to spend the whole day with him.

Ace and Trap callously ditch the kid, leaving him in the care of Cryin’ Houn’. Nobbie couldn’t be happier, though, as Cryin’ Houn’ is his hero. Houn’ happily sits Nobbie down and tells him the story as to why his name is so important and why he repeats it all the time. 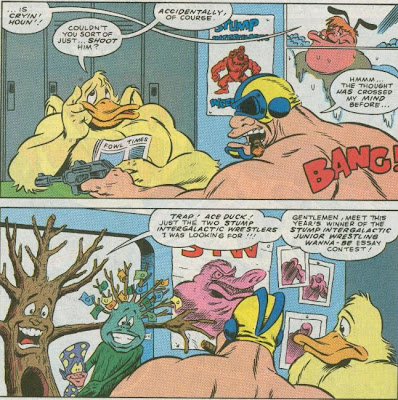 Houn’ explains that on his homeworld, it was natural for all the parents to have extremely large litters of identical pups. To make sure he’d never be lost or forgotten, his mother taught him and all his littermates to recite their names over and over again. Then one day, while at daycare at the “Maul”, a fire broke out and all the pups got mixed up in the panic to get out of the building. Many of the pups never found their parents again, as they didn’t know their names. However, Cryin’ Houn’ knew his and was quickly reunited with his mom.

And so Cryin’ Houn’ tells Nobbie that’s why names are so important. Enthusiastically, Nobbie agrees.

Later, at the child care section of the Stump Arena, Nobbie drives Stump and Sling absolutely crazy, repeating his name to them so that they’ll never get it wrong again.

*Nobbie had a brief cameo in TMNT Adventures #13, watching Stump's broadcast of the Final Conflict.

This was an unexpected bonus story that I almost missed entirely when reviewing TMNT Adventures #35.

The Intergalactic Wrestling characters never really struck much of a chord with me; Cryin' Houn’ being the most forgettable. Ace Duck had the advantage of having a toy which I owned as a kid, Trap got to appear in the big finale of the “Final Conflict” arc from early in the series and Stump and Sling managed to pop up from time to time or at least have their names dropped here and there. But Cryin’ Houn’? That guy just stood around repeating his name for one issue and I never really cared for him.

“Mah Name!” changes all that, producing a lightly saccharine tale explaining just why the heck he won’t stop repeating his name all the time. This smidgen of back story actually gives Houn’ more depth than either of his cohorts; an unexpected boon to an otherwise forgettable character.

Not much else to say about the story, other than the fact that I read Stump with the voice of Hokey Wolf and Sling with the voice of John Astin, which makes them more fun in my head than they have any right to be.

Grade: N/A (as in, “Not really a gradable story, though the panel where Houn’ inadvertently flashes his junk at a confused Nobbie was positively hilarious”.) 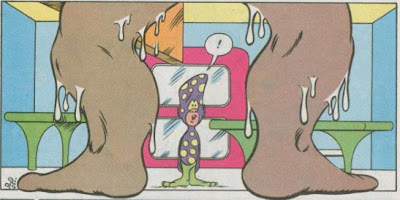