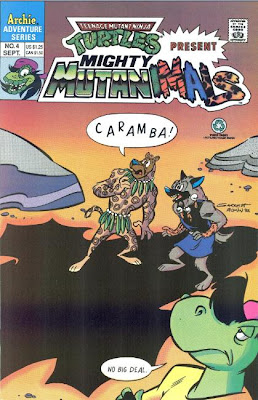 “Days of Future Past”

Observing a flock of bats leaving their caves for the evening, or “the Elation of Wings” as it was called back on Huanu, Wingnut and Screwloose bask in the beauty of the migration while simultaneously missing their now-lost ability to fly. They rejoin the rest of the Mutanimals, who are preparing for their journey to the North and the Path of the Dragon; the Path of Wisdom. 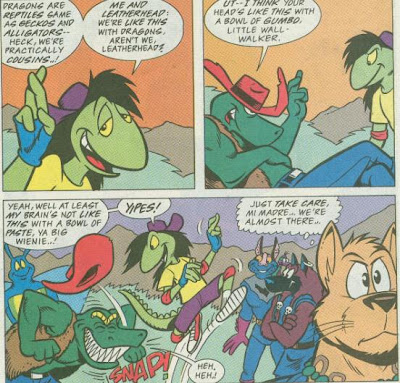 At the skull-shaped temple, Juntarra comes face to face with an unimpressed Mr. Null and attempts to castrate him with her knife (for real). Null laughs her attack off, disarming her and slapping her around. Enraged, Juntarra steals the scythe from the Grim Reaper and takes another whack at Null. Now angry, Null seizes the scythe and lays Juntarra out cold with a fist to the face.

Crossing a desert, the Mutanimals stumble across an slaving operation. The Mutanimals intervene, taking down the guards and freeing the slaves. The slaves suddenly drop to their knees and begin worshipping Jagwar as a god. Dreadmon asks what’s up, leaving Jagwar to nervously admit that back in his younger days he used the local tribes’ worship of the jaguar to his advantage; masquerading as a god for his own gain. Never the judgmental type, Dreadmon remarks that he wishes he’d thought of it, too.

The Mutanimals continue up a mountain and finally reach the Path of the Dragon. The bearded, French-smoking dragon Glyph greets them (and his “distant cousins” Mondo and Leatherhead) and tells Jagwar that his mother had spent many years learning wisdom from him on her journey. Glyph knows they’re in a hurry and decides to let them depart with only one story. 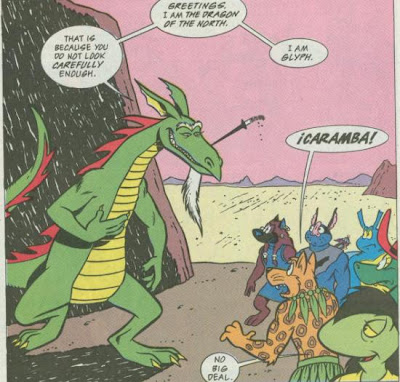 Over four billion years ago, there was a planet between Jupiter and Mars named Astraea. Two warring alien factions, the Gryphs and the Soomas began battling over the planet’s resources and when the Soomas launched a secret weapon, they wound-up destroying Astraea (reducing it to the asteroid belt) and both races in the explosion. The lone survivor, a Gryph, crash-landed on Earth with nothing to show for his campaign but a valley full of spaceship wreckage. That Gryph was, of course, Glyph.

The Mutanimals venture into the valley full of spaceship wreckage the next day, contemplating the meaning of Glyph’s story. Man-Ray doubts its authenticity, as “Astraea” was the goddess of justice; citing it as nothing more than an allegorical fable. Searching the wreckage, Leatherhead comes up with his own moral, “Walk tall and carry a big stick”, as he pulls a humongous gun out of a cockpit. The other Mutanimals follow his lead, arming themselves with outrageous alien artillery. 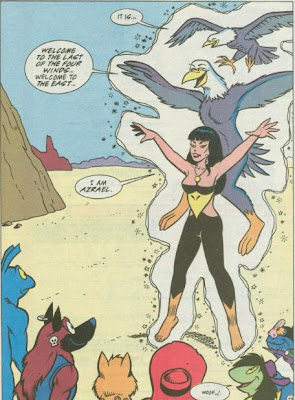 Crossing several days into the desert, the Mutanimals are greeted by an eagle; the same one that tried to warn Juntarra of danger. The eagle transforms into a beautiful woman, who introduces herself as Azrael.

*Jagwar, in a spiritual vision, witnessed Azrael (as an eagle) trying to warn Juntarra of the Grim Reaper’s approach in Mighty Mutanimals #1.

Man, Null is one nasty SOB, isn’t he? I love the way Kazaleh draws him in his big “stepping into the spotlight” panel on page 4. Realistically, he’d barely been away for three issues from the Mutanimals' perspective (jumping from the miniseries to the ongoing), and yet his “big return” felt suitably epic. While I don’t care much for Juntarra’s bizarre affection for comic book swearing (“@*#*” appears in every sentence she speaks), the sight of her lunging at Null with her knife, threatening to make him “sister Null” was pretty intense (and shocking; castrations in a kid’s comic?). 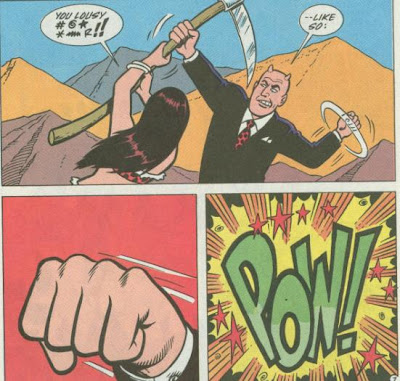 The bit with the slaves feels tacked on, but it actually serves a purpose. The “Mighty Mutanimals” are supposed to be a superhero team, yet they’ve spent the last three issues of their ongoing series on a camping trip through the jungle. It was high past time they actually, I dunno, performed some superheroics and saved people. There’s some really bad Clarrain (Murphy) dialogue from Jagwar, first giving a laundry list of all the horrible things Man does to the environment, then a really awful exchange where he insists that “It is MEN who are the MONSTERS!” Typical Clarrain stuff, sure, but at least it only takes three pages.

Even better, the situation facilitates a surprising reveal about the milquetoast Jagwar’s history; that he wasn’t always a goody-two-shoes and abused his appearance to get “comforts” from the superstitious locals. Dreadmon regrets that he’d never thought of it, though wasn’t he using his appearance to elicit offerings from natives in his first appearance in TMNT Adventures #15? Maybe not the same thing as pretending to be a god, but close enough.

Also, I know the “kilt” is part of Dreadmon’s design and all, but the way Kazaleh draws it, it really looks like Dreadmon’s wearing a miniskirt.

The story Glyph tells is a pretty bland parable, which I’d probably roll my eyes at if it weren’t for the hilarity of the Mutanimals getting the completely wrong message from the thing. He tells a story about two warring races annihilating one another and the Mutanimals interpret that as, “We need bigger guns”?

The Path of Wisdom, indeed.

And last but not least, Azrael’s outfit is hilarious. She has a bird’s head-shaped tube-top with her boobs forming the “eyes”. Apparently while she was busy stealing Vampirella’s hairdo, she snagged some of her stupidly saucy fashion tips, too.

Grade: C+ (as in, “Crossing your fingers while looking smugly at someone and saying "ohhh, you two are like this" means something completely different now than I guess it did in ‘92”.)