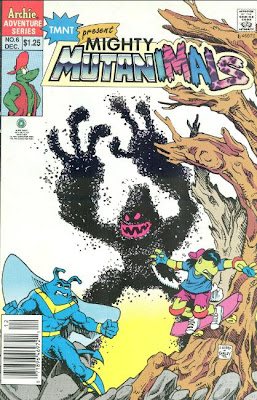 As the rain forest burns, the Mutanimals, the Turtles, Splinter and Ninjara face off against their foes: War, Famine and Pestilence; three of the Four Horsemen of the Apocalypse! Suddenly, the Grim Reaper reveals himself to be the Fourth Horseman, Death (big shocker), and with his scythe, slices reality into three segments, dividing the combined Mutanimal/Turtle forces. 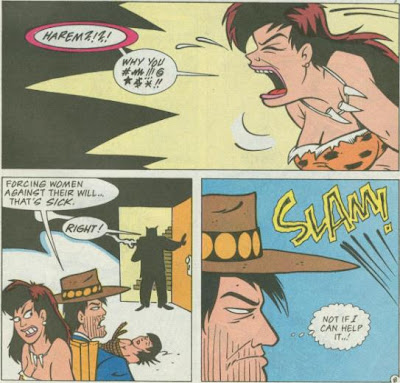 Inside the skull temple, Null plops the unconscious Azrael down at the feet of the bound Kid Terra and Juntarra. Kid Terra pleads for Null to let the ladies go, but Null has very important plans for them… they’re going to be part of his harem (yikes).

Back in the desert, Death opens up his “toy chest”, pulling out marionettes of the other three Horsemen and gets ready to “play”. Splinter, Leonardo, Man Ray, Wingnut and Screwloose suddenly find themselves drafted into the army and standing out in the middle of a war zone. Jagwar, Donatello, Raphael and Mondo Gecko end up in an operating room dressed in surgeon’s garb. Michelangelo, Ninjara, Dreadmon and Leatherhead appear in a wilting corn field.

In the corn field, the heroes find themselves hungrier than they’ve ever been before, quickly wasting away to skin and bones. They see a breadline stretching ever onward and fall in line to wait for their meager sustenance. In the operating room, our heroes are faced with cages and cages full of monkeys destined for vivisection. Jagwar considers freeing the pitiable little guys, but the head surgeon warns them that they could already be infected with new strains of deadly viruses. He pulls back his surgical mask to reveal himself to be Pestilence. On the battlefield, our heroes desperately try to avoid getting blown up by "friendly fire". Their commanding officer orders them to seize the enemy barn on the horizon where he suspects nukes are being hidden. The good guys narrowly avoid getting killed by their own forces, but when they kick down the door, they discover War preparing to launch a nuclear missile destined for every nation on the globe.

Back in the breadline, the good guys finally make it to their turn, only for the food to run out. They ask why they can’t have any of the food in the nearby truck, but the distributor laments that those resources are going to the Presidential Palace. As the President commands the military, the starving have no choice but to accept their fate. Suddenly, a can falls from the back of the truck and everyone fights over it. They decide to share the scrap of food, but when Dreadmon claws it open, Famine bursts out. Sapping the last of their strength, he carries the helpless heroes away. 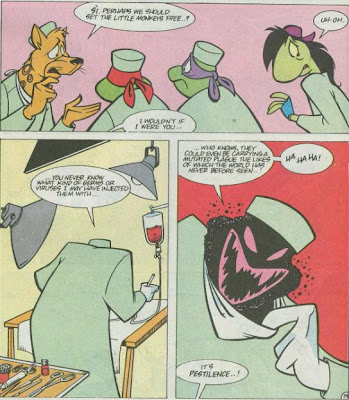 At the operating room, Pestilence reveals that the patient he’s been working on (the Earth) has died. The Turtles try to attack him, but since he’s made of bugs, they can’t land a solid hit. Jagwar has an idea and releases the monkeys, who promptly devour the Horseman. Alas, that just allows Pestilence to possess the primates, who knock the heroes unconscious. Restoring himself, Pestilence wheels the fallen protagonists away.

At the barn, War proves immune to sword blows from Leo and Splinter and counters by using each hero as a bludgeon against one another. He reveals that, in the end, the heroes shall defeat themselves. The protagonists ponder what he means, when suddenly they notice a massive warhead, “friendly fire”, heading toward them and the nuke. The nuke explodes and War hauls their unconscious bodies away.

Out on the desert overlooking the skull temple, Death gleefully dances his three Horsemen marionettes over the beaten and broken marionettes of the Turtles and the Mutanimals.

*Modern Biblical studies have redefined the Four Horsemen of the Apocalypse as War, Famine, Conquest and Death; Conquest replacing Pestilence.

*This issue was published in the UK by Fleetway as TMHT Adventures #74.

This middle segment is primarily the reason why I think making “United we Stand…” a crossover arc was really worth it. The bookending segments and their hard-edged, action-adventure tone were drawn by Chris Allan and his hard-edged, action-adventure oriented style. But this middle section is strictly goofy, surreal and very dark comedy, perfectly befitting Mike Kazaleh’s more whimsical and “fun” art style.

Steve Murphy (Dean Clarrain) uses this second part as a means to showcase three more political/environmental tragedies he wants to raise awareness about, but unlike most of his previous attempts at “raising awareness”, he actually manages to work the politics into the story very cohesively. It’s an excellent way of illustrating how three of the four mythical Horsemen of the Apocalypse can be found in today’s world in very specific and serious circumstances, but without sacrificing the narrative flow or the action in the process. Kazaleh’s pencils become childishly crude during these segments, but in a methodical way that compliments Death’s “toy box” scenario and only adds to the dark comedy (these are some rather humorless real world situations, after all). Here, Murphy finally finds a way to incorporate his political and environmental themes into the book without superceding the entertainment, taking the readers out of the experience or just straight up talking down to the audience like they’re too stupid to understand the “subtle” metaphors.

Murphy’s writing style and narrative direction were really changing during late ’92 and early ’93, and the “United we Stand…” arc is a good example of how his sensibilities and priorities have begun to change.

I was a bit surprised by some of the sexual danger in the issue (Null is building a harem and Kid Terra stops just short of flat out saying “rape”) and a moment of phallic innuendo (at the sight of War’s nuke, Wingnut teehees, “Looks like we’ve burst in on some weird male ritual…”). Not that I’m criticizing these darker threats and more “mature” moments of humor, but just pointing them out as another example of how this young readers book has really begun to grow.

Barry Grossman seems to have been rushed again, making all sorts of coloring errors he typically isn’t prone to. Mike wears Raph’s bandana for an entire two-page sequence, Screwloose gets colored like Wingnut’s army uniform and so on. I don’t sweat the small one-panel stuff, but the Mike-as-Raph thing was kind of annoying, particularly since it came immediately after a one-page splash where Raph and Ninjara are being separated by Death’s scythe and dramatically call out for one another.

This segment of “United we Stand…” is a perfect example of what Murphy is capable of when he actually takes the effort to weave the political commentary into the story rather than have the characters step out of the story to boldly state the political commentary. You can really see Murphy grow and improve as a writer over the course of TMNT Adventures (I know, I know, this is Mighty Mutanimals) and this whole arc is really where you start to see a major change in him.

Grade: A- (as in, “And I read Pestilence with Waspinator’s voice, just for the record”.)