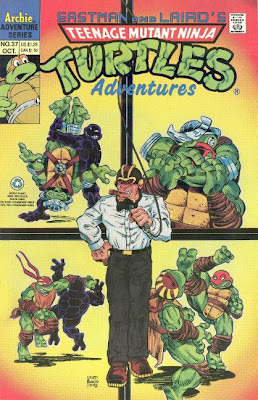 In the desert, the Turtles, Splinter and Ninjara continue on their path toward subtropical Africa… much to the dismay of everyone except Splinter. Splinter sees its time for a break and as Donatello reflects on just what the heck the Shredder’s time traveling was all about, another time traveler greets them: Cudley the Cowlick. Cudley says that Stump and Sling have another wrestling proposition for them and, should they accept, then he’ll give them a ride to any place and time of their choosing. Looking for any means to get out of the desert, the Turtles, Splinter and (a severely freaked-out) Ninjara crawl into Cudley’s mouth. 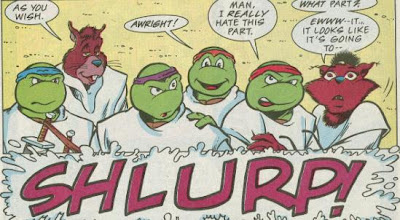 Cudley whisks them away to the Stump Arena in Dimension X where they’re met by anthropomorphic tree-men Stump and Sling. The Turtles head to the locker room to change into their stupid costumes while Splinter and Ninjara take their places in the audience.

In the locker room, the Turtles greet their old wrestling chums Cryin’ Houn’, Ace Duck and Trap. As they change, Trap lays a surprising bomb on them: The Turtles aren’t scheduled to fight any of them, but to fight each other. And whichever Turtle wins will have the fortune of fighting the enigmatic El Mysterio.

With Trap acting as announcer and referee, Ace Duck takes on a wolf-man named Bloodbath. From the audience, Ninjara is really getting into the show, while Splinter decides to leave until the Turtles’ match for some privacy. From a vantage point looking deep into the cosmic scenery, Splinter ponders how small and alone he really is in the universe. Ninjara approaches him, hoping to have a private discussion. She asks how he feels about her; her relationship with Raph, particularly. Splinter is honest, explaining that he didn’t trust her at first, due to her past with Chien Khan, but has since come to trust her completely. In regards to her relationship with Raph, he admits that he’s uncomfortable with it, but mostly because it’s forcing him to realize that his children are finally growing up.

The noise of the crowd draws Splinter and Ninjara back to their seats as the Turtles enter the ring. The brothers are initially reluctant to fight one another, at least until Raph takes Leo from behind. After that, it’s every Turtle for himself!

Mikey is almost immediately pinned by Leo and Trap counts him out of the fight. Leo and Raph then gang up on Donnie, tossing him out of the ring. Raph pins Leo, removing him from the tournament, and then sets his sights on Don. Don surprises Raph, unleashing a number of complex moves in rapid succession (having learned them all from books). Don pins Raph and wins the chance to fight El Mysterio… Cryin’ Houn’ in a new costume. Don eventually takes down El Mysterio, winning the match and a kiss from blonde android showgirl, Fayme. 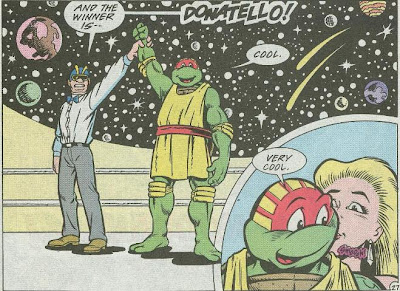 The adventure over, the Turtles, Splinter and Ninjara climb into Cudley’s mouth and head straight home.

*Stump, Sling and the rest will return in TMNT Adventures #48.

*This issue was published in the UK by Fleetway as TMHT Adventures #72.

“Stump’d Again”; an altogether unexpected throwback to one of the earliest stories in TMNT Adventures and a fun breath of fresh air from the “world tour” stuff that’d been going on for nearly ten issues at this point. There’s no pretense of multicultural education or increased political and socioeconomic awareness or environmental conservation… Just a fun, entertaining one-off adventure with no ulterior motives or soapbox agendas to speak of.

Stump and Sling’s wrestlers appeared a few issues back in a bonus story called “Mah Name”, which now seems evident was included as a means to remind readers that those characters existed in anticipation for this story. But even so, it still feels good to see them again and to have their many encounters from early in the series referenced. The actual tournament between the Turtles was a nice gesture, but it doesn’t reach fruition until too late in the comic, allotting only five pages of content. As such, it makes Mike seem totally inept at fighting and Leo vastly inferior in skill to Raph. Donnie’s victory over Raph came as a pleasant surprise, though, and it was refreshing to see the brainy Turtle take victory over the sarcastic and temperamental bruiser.

The gag with Cryin’ Houn’ as El Mysterio was actually pretty funny, too, particularly his adjusted mantra, “Yo soy – El Mysterio!”

Though it pains me to say this, I think I’m actually beginning to warm up to the character of Ninjara ever so slightly. As my previous reviews have illustrated, especially when she first appeared, I couldn’t stand the chick. It had to do with her rushed character arc (the Turtles accept her as their friend immediately after she tried to exterminate the entire human race because shut up, that’s why) and her “Mary Sue” qualities (being better than everyone else at everything and never losing her “cool”) that really irritated me.

This issue sees Ninjara encountering the more insane and cosmic elements of the Turtles’ early adventures, stepping away from the supernatural and martial arts stuff she’s comfortable with, and her slack-jawed reaction as she totally freaks out at the weirdness finally grants her an endearing moment. Some of her behavior in this issue is, dare I say it, even cute, as she enthusiastically plucks dollar bills from Sling's branches before squeeing like a school girl at the thought of the Turtles in funny costumes.

Her heart-to-heart with Splinter seemed like a measure to address her rather sudden change of allegiances and attitude, though I still don’t think it makes the narrative convenience of her change any less sloppy. Regardless, it was nice to see her and Splinter talking privately and coming to terms with one another. Splinter’s reaction to meeting Cudley for the first time and seeing the whole wacky outer space portion of the Turtles’ lives, though entirely different from Ninjara’s reaction, was also amusing and enlightening (even in the Mirage comics, Splinter usually stayed separate from the cosmic adventure stories and rarely crossed over with them). Splinter’s cultural and spiritual knowledge and appreciation is what fueled the last half dozen issues of the series, but this story sees him thrust into a sci-fi setting, showing him that there’s so much more to the universe than even a rodent as well-traveled and learned as he has encountered. But no one can take a spiritual humbling quite as well as Splinter, that’s for sure.

We also get our first glimpse of a retcon (“retroactive continuity”) in this issue, as Splinter remarks that his sons are finally “growing up”. In TMNT Adventures (miniseries) #1, we saw the mutagen turn the Turtles into teenagers immediately, bypassing any actual “childhood”. Splinter’s statement ignores that visual (taken directly from the Fred Wolf cartoon series) in exchange for an origin closer to the Mirage comic. We’ll see the Turtles’ youth much later down the line in a two-part story beginning in TMNT Adventures #58.

“Stump’d Again” is exactly what a “breather” issue between ongoing story arcs should be like; fun and light, giving time for the characters to reflect on what they’ve just been through and, most importantly, not trying to overload the plot with too many messages. Clarrain has finally started winning me over in regards to Ninjara, and even though I don’t think her transition to a protagonist was done well, I think it’s time I just got the hell over it.

Grade: A (as in, “Although I still don’t think she’s 'hot' and I can’t fathom the furry freaks of the internet who do”.)