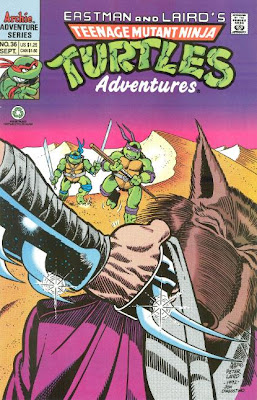 As the sandstorm dies down, the Shredder approaches Splinter’s unconscious body. Seizing him, he remarks with disgust at how his lifelong foe was once a man and how his band of freaks have thwarted him so many times. 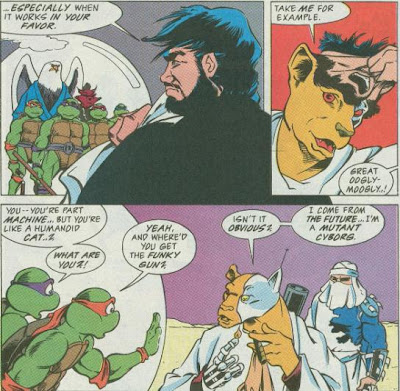 Suddenly, the Turtles, Ninjara and Al’Falqa arrive and challenge the Shredder. The fight goes in their favor until another member of Shredder’s caravan arrives and blasts the heroes with a laser, trapping them in a forcefield. The human removes his disguise, revealing himself to by a cyborg mutant cat. He introduces himself as Verminator-X, a time traveller from the future. With that, the Shredder and Verminator grab Splinter and disappear into the desert.

Several hours later, the forcefield weakens enough for the Turtles to pop it with their weapons. Since the shifting sands have hidden the Shredder’s tracks, Al’Falqa dispatches a falcon friend to search for them.

The falcon finds them in an oasis. Splinter has awakened and demands to know what Shredder is up to. Oroku Saki explains that he has joined with Verminator-X to steal the Black Stone of Mecca, and once it is joined with the White Stone, the pair shall be granted immortality. They await only the imminent arrival of their timeslip to be victorious. Verminator notices the falcon spying on them and shoots, but misses. 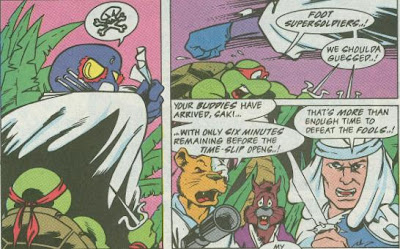 The falcon returns and tells Al’Falqa everything. Al’Falqa leads the Turtles into a foggara; an underground aqueduct used to carry water to artificial oases. The Turtles arrive at the oasis only fifteen minutes before the timeslip. They attempt to take the Shredder’s guards by surprise, only to discover that they’re Foot Super Soldiers. As the Turtles take on the Super Soldiers and Al’Falqa takes on Verminator-X, Ninjara dispatches with the Shredder and rushes to Splinter’s side. Splinter tells her to forget about him; he has a more important task for her to complete.

Eventually, the Turtles take down the Super Soldiers, but just as the timeslip appears. Shredder and Verminator make haste to the portal, carrying Splinter along as insurance. Leo stops Shredder, reminding him of the debt he owes them for saving him from Krang’s mind control. Shredder reluctantly hands Splinter over, thus evening the score. Al’Falqa demands that they return the Black Stone, too, but they aren’t feeling so generous and vanish into the timeslip. 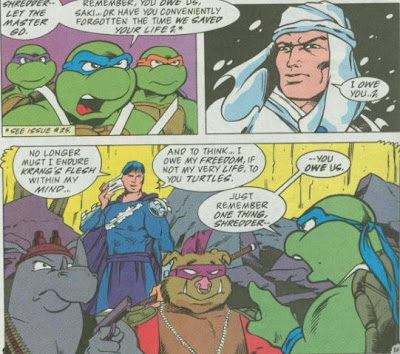 Ninjara tells Al’Falqa to cheer up; in the confusion she used her skills as a thief to swap the Black Stone with an ordinary stone and hands the genuine article over to the bird-man. Dropping to his knees and facing Mecca, Al’Falqa praises Allah.

*Shredder became indebted to the Turtles in TMNT Adventures #25.

*Shredder and Verminator-X will return in TMNT Adventures #42.

*Al-Falqa will return in TMNT Adventures #53.

*This issue was published in the UK by Fleetway as TMHT Adventures #71.

Now this is how you write a “Shredder returns with a vengeance” story. Try and remember the last time Shredder came back from an extended absence in the book; where his ingenious plan to defeat Splinter and the Turtles involved a giant maze in a mousetrap factory. Always a pleasure to see the Shredder get his dignity back.

In the grand scheme of things, though, this two-issue plot was little more than a prelude to bigger things to come down the road, namely “The Future Shark Trilogy” and all the events that spin out from it. So looking at this adventure isolated on its own, it may not seem like much: Shredder steals a magical stone so he can become immortal, fails, retreats. But if you step back and view it from the grand scheme of things, the real crisis is just getting started.

The first four pages of this issue are mostly recycled from the last, which feels like something of a cheat when you’re plowing through the series back-to-back, but I believe this issue is actually a couple pages longer than the standard series length, so I’m sure it all balances out in the end.

Shredder actually looks pretty cool in that torn-up Arabian sheik getup of his and the lack of a helmet allows for Allan to draw his face for several panels. I remember watching the old Fred Wolf cartoon back in the day, where the Shredder wore that damn helmet and face-plate to bed with him, so to this day whenever I see him take the thing off it feels like something “special”. I sort of take exception to Ninjara defeating the Shredder so easily, as it seemed like a rather shallow means to make the new character seem even cooler by having her wipe the floor with the Turtles’ greatest villain; but that’s a comic book trope we’ll all have to learn to live with.

Verminator-X certainly rubs off as a very random character in this adventure, but again, his purpose and machinations will be revealed a few more issues down the road, so patience is a virtue. His human disguise doesn’t make any sense, however, seeing as how the moment he takes off his mask he grows an elongated feline snout. But let’s just chalk that up to “he’s from the future and can do stuff like that I guess”.

We also get the return of the Foot Soldiers, or the Foot Super Soldiers to be precise, and I hadn’t realized how much I missed them. Raph striking one with his sai and responding in confusion with, “Klang?!?” was a nice call-back to the Turtles’ first encounter with the Foot Soldiers in TMNT Adventures (miniseries) #1, where Raph said roughly the same thing when he stabbed one for the first time.

Basically, this “Black Stone of Mecca” two-parter feels hollow by itself, but serves a greater narrative function in the long run. Shredder’s big return may have been brief and his plan unsuccessful, but we’ll be seeing more of him pretty soon in one of the most popular story arcs in the entire series.

Grade: B+ (as in, “Bebop and Rocksteady get to appear for one panel thanks to a cameo. I hadn’t realized how much I missed them, too”.)