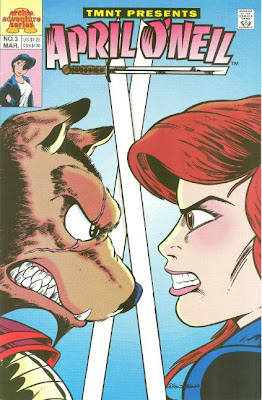 Down in Johnny Yen’s lair, Chien Khan steps in with his gang of Dog Stars. Yen offers to join his Golden Triangle Gang with Khan’s forces, but Khan refuses. And thus, he reveals his tragic origin…

Chien Khan was once known as Yoshi Chen, a half-Japanese, half-Chinese boy growing up in Chinatown. His mixed heritage made him an outcast amongst the pure Chinese living there, who called him “dog”. To gain power through fear, Chen bought a vicious dog named Mauler who kept the thugs off his back. He eventually gained the respect of Johnny Yen, who invited him to join his Golden Triangle gang. Learning of Yen’s mystical powers, Chen sought to gain similar abilities and began studying the mystic arts. This upset Yen, who had Chen and Mauler jumped and left chained-up inside a shipping container headed for Japan, where they’d starve before they got there. 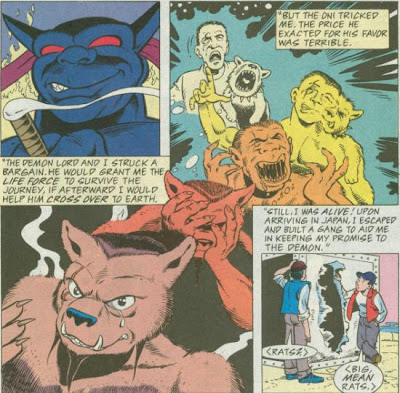 Using his knowledge of the black arts, Chen struck a deal with Noi Tai Dar, who’d give him the power to get even if he helped the demon return to Earth. Noi Tai Dar, though, fulfilled his end of the bargain by fusing Chen with Mauler, turning him into a freakish dog-man. Now known as Chien Khan, he remained in Noi Tai Dar’s service until April, the Turtles and the Warrior Dragon vanquished the demon back to the underworld. Free from control, Chien Khan rebranded his White Ninja as the Dog Star gang and returned to Chinatown for revenge on Johnny Yen and the Golden Triangles.

By now Johnny Yen’s had enough of Khan’s exposition and transforms into a dog-monster and attacks. Khan strikes him with a mystical shuriken that negates the immortality spells Yen has used to survive, reducing him to an old man. The feeble old Yen then hobbles off down a secret corridor. Khan tells one of his men, Chak, to grab Oyuki’s camcorder and film his victory so he can watch it later. He then has his Dog Stars drag April and Oyuki down the secret passage so they can be used as sacrifices to achieve his true objective: to obtain the elixir of immortality and shape-shifting that Yen possesses.

They follow Yen to his secret lair, but before he can grab the goblet of elixir, Khan snatches it up and kicks Yen into the Pool of Sight, where he disintegrates. Before he drinks the potion to regain his human form, Khan offers April and Oyuki a last request. Oyuki asks for a cigarette and Chak obliges. Smelling that the liquid within the Pool of Sight is flammable, April kicks the lit cigarette into it, igniting the pool. Exploding, the Pool of Sight also takes out the Tree of Life (the stalactite that drips the youth elixir). In the confusion, April and Oyuki escape to the surface. 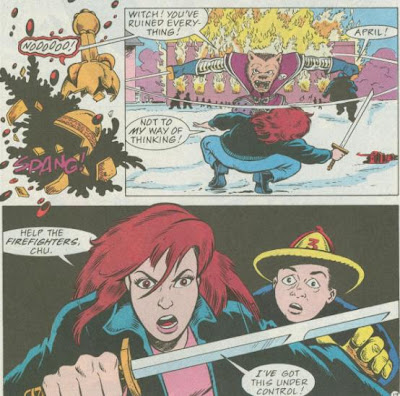 There, they find the explosion has taken out a warehouse. Khan is about to drink the goblet of elixir but is thwarted when April knocks it out of his hand with her katana. Chu Hsi arrives with the rest of the FDNY and offers to help April in her fight, but April tells him to just see to the fire. April bests Khan in a sword duel, forcing Khan to make the mistake of summoning demonic forces beyond his control to aid him. Rather than aid him, they drag him kicking and screaming back to the Underworld to explain himself to a furious Noi Tai Dar. The battle over, April embraces Chu and gives him a big kiss. Oyuki gags. 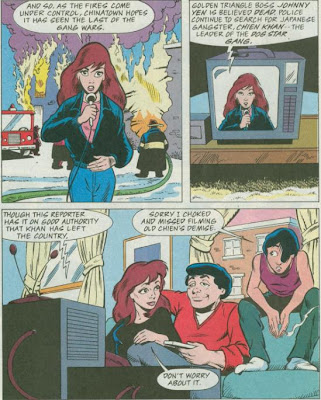 The next morning, Oyuki’s footage of April’s freelance report on the Chinatown gang war has become a media sensation. Watching the broadcast from her apartment, April apologizes to Chu for being so short with him before. Chu understands and apologizes for refusing to help Oyuki earlier, too. Oyuki, meanwhile, has decided that her nicotine addiction has caused her more than enough grief and promises to kick the habit. Suddenly, the doorbell rings and April opens it to find her former employer, Murdoch Maxwell, and a ton of flowers, begging her to come back to his network. April slams the door in his face. Grabbing some soda, April, Oyuki and Chu give a toast to a bright future in freelance reporting.

Besieged by the pack of stray dogs, Inky fights for his life and, after much biting and barking, sends them all into retreat. The French poodle witnesses the altercation and becomes smitten with Inky. She rushes out to greet him and the two pooches share a romantic evening together. 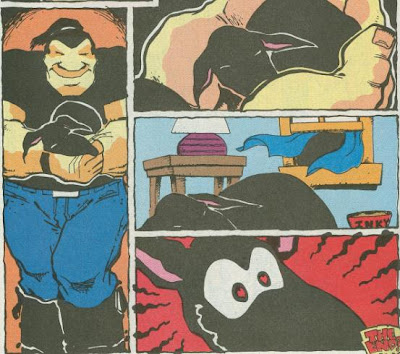 Inky eventually returns to his hotel where he falls asleep outside the front door. Tattoo is shocked to find him there and brings the sleepy little Chihuahua inside.

*This story is continued from April O’Neil #2. April will appear again in TMNT Adventures #46.

*Tattoo and Inky will return in TMNT Adventures #67.

Well, it’s good to finally know just what the hell was up with Chien Khan. His origin actually seems to be the centerpiece of this storyline, with his lengthy exposition presented as sort of a “big deal”. It definitely makes the April O’Neil miniseries feel like a necessary sequel to the “Midnight Sun” trilogy, as that arc just feels like so much nonsense without the accompanying back story and narrative closure provided by this storyline. Unfortunately, the “big deal” about Chien Khan’s origin might leave you thinking, “So what? Big deal…” as Khan never appears again in the series. In instances like this, it’s almost better to get the origin out of the way first instead of last, I think.

The arc’s resolution goes out with a bit of a whimper, too, as two-dimensional villain Johnny Yen dies before he’s barely had time to say hello and Khan’s one-way trip to the Underworld rubs off as extremely abrupt. There’s a lot of great action and artwork from Chris Allan supplementing these otherwise thin elements, so it might not strike you as being such a weak conclusion.

But while this last chapter suffers from lengthy exposition and a convenient "self destruct button” style resolution, it keeps going strong with the excellent character work on April and Oyuki. April’s repeated dismissals of Chu’s offers to help are acknowledged with an apology in this issue, which I appreciate, as it keeps April in the “strong female character” territory without falling into that “bitch” zone too many authors fail to avoid. Author Steve Sullivan is careful not to make this feel like an insipid “girl power” storyline that focuses on the title character’s gender as her primary attribute, but instead illustrates her as a capable individual who dismisses her male counterpart’s offers of assistance not out of any “I don’t need no MAN getting my back!” attitude, but out of concern for his safety and a determined focus on her own personal battle.

The anti-smoking message reaches its predicted zenith with this issue, as I’m certain we all knew it would, with Oyuki making a big declaration that she's going cold turkey. On the bright side, it’s over and done with in two panels instead of two pages, which is how Steve Murphy (Dean Clarrain) probably would’ve handled it if he’d taken on full script duties.

Jon D’Agostino’s inks are noticeably different from that of Brian Thomas, the guy who inked the previous two issues. He gives the characters, April especially, too many distinguishing facial lines. April winds up looking older and less cute, particularly with the sharp cheek bones. I definitely prefer Thomas’s work.

From a storytelling standpoint, this last installment is probably the weakest in the April O’Neil miniseries, but remains enjoyable thanks to exciting artwork and strong character development. I’d definitely consider the April O’Neil miniseries to be “required reading” for anybody looking to pick up the bare essentials of the TMNT Adventures narrative, as it is an important follow-up to the “Midnight Sun” trilogy and one of the best April-centric stories in any Turtle medium.

Grade (Main Story): B (as in, “But just keep away from that May East Saga bullshit”.)

Grade (Back-Up): N/A (as in, “Nuts, I forgot to say anything about the last chapter in the Inky storyline. Guess that gives you a pretty good idea about it, right?”)