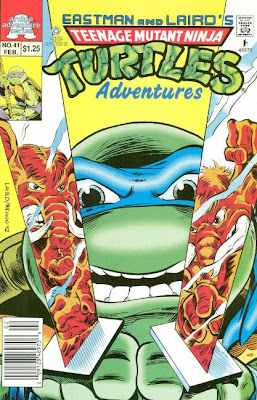 “…And Deliver us from Evil”

In New York City, Raph and Ninjara are walking down the street incognito when Ninjara spots a poster for a woolly mammoth exhibit at the Museum of Natural History. The thought of going to see it repulses Raph, as it reminds him of a previous adventure he had. Intrigued, Ninjara asks him to tell her a story…

Training in the lair, the Turtles take a break to watch the evening’s Channel 6 news report from April. Interviewing the eccentric scientist Dr. Selena Davis, April has some questions about her controversial cloning experiments. Dr. Davis begins babbling threatening nonsense and April calls the interview short. April then immediately walks into the lair, startling the Turtles, as she’d taped the interview earlier in the day. Hungry, they all decide to break for pizza. 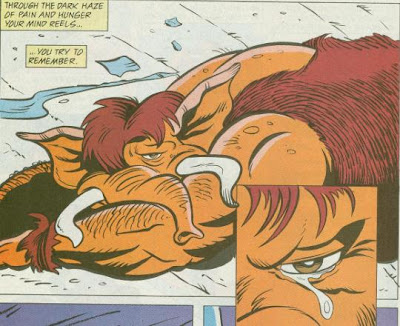 In a bad neighborhood, two bums are walking down the street as one of them, Clark, yammers on about how he used to be an ace reporter but was fired because he was too “mild mannered”. Another bum comes rushing by, screaming about a monster by the riverfront bridge. Seeing this as his chance to get back on top, Clark “flies” to the scene of the monster sighting. What Clark finds there is the Prehistoric Manmoth, thawed from his trip to the icy depths of the East River and feeling grouchy. Clark flees as the Manmoth collapses and weeps, remembering his days as a caveman in prehistory. The Manmoth then spots a freight truck carrying dinosaur statues to the Natural History Museum and, reminded of home, decides to follow them.

Elsewhere, a young henchman named Wayne returns to his boss… Dr. Selena Davis! She reveals to Wayne and her other young stooge, Robert, her latest creation: a clone of the Prehistoric Manmoth (created through hair samples she collected a few months ago). Just then, a news report on the return of the real Prehistoric Manmoth excites Dr. Davis, who dispatches her goons to track it down and collect it for her. The lackeys begin leaving a trail of daisies to attract the hungry mutant and quickly stumble across him in an alley. 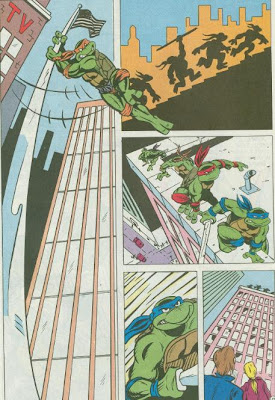 Taking the hair home for analysis, Don discovers it to be that of the Manmoth. Rationalizing that the Manmoth would likely head to a place with surroundings he’d recognize, such as dinosaurs, Don suggests they investigate the Museum of Natural History. Taking the Turtle Van to the museum, Leo tells April to wait outside while they infiltrate the joint. Going in through the back, they find the Manmoth locked in a cage. Dr. Davis then steps out with an even bigger surprise: her Manmoth clone, who is more vicious than the original and completely subservient to her. The Turtles battle the clone as April sneaks in and gets the whole thing on tape. In the battle, the controls keeping the cage locked are busted and the real Manmoth escapes. Enraged, the Manmoth punches the clone through a wall and into the cloning equipment, which promptly explodes and kills the doppelganger. The Manmoth then holds the collapsing ceiling up long enough for the Turtles and April to escape. 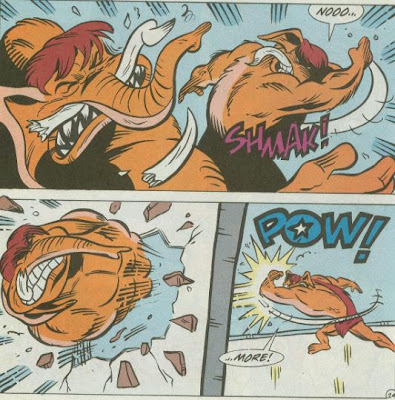 Later, April tries to explain everything to a policewoman, but she isn’t buying it. That is until the Manmoth bursts out of the rubble, holding Dr. Davis and her henchmen (who are begging to be arrested). The policewoman offers to ignore everything she’d just seen, not wanting to deal with the paperwork, if April can find a place for the Manmoth. April takes the Manmoth to a sea captain who owes her a favor. The Turtles bid their friend farewell as he is loaded onto a ship heading for a deserted island in the Arctic.

*The story "The Return of... Monsterex!" takes place shortly after the prologue of this issue.

*In the prologue narrative of this issue, Ninjara says that she and Raphael have been to several museums together, indicating that the Turtles have been back in New York City for some time since their return in the previous issue.

*Personally, I’d place the flashback narrative of this issue between TMNT Adventures #4 and TMNT Adventures #5, as it is described as taking place only “a few months” after the Manmoth's initial rampage.

*The Prehistoric Manmoth sank to the bottom of the river in TMNT Meet Archie #1, in the story “Origin of the Species”.

*Woolly mammoths, dinosaurs and cavemen only ever coexisted in the universe of “The Flintstones”, making the plot point in this issue where the Manmoth is “attracted to dinosaurs because he recognizes them” pretty… dumb.

*This issue was reprinted in the UK by Fleetway as TMHT Adventures (#77).

While I want to celebrate the “return” of Ken Mitchroney to TMNT Adventures, I feel pretty well positive that this issue was a “shelved” story from some years earlier, when Mitchroney was still the regular artist on the series. The prologue being drawn by Chris Allan and acting as a hasty means to explain the odd timeline of the main story seems a dead giveaway. Exactly where this issue was originally meant to be published, I can’t say for certain, but my gut urges me to guess it was for a TMNT Adventures Special.

Filler though it may be, it was still great fun to see a “new” story by Ken Mitchroney, whose style defined the early issues of TMNT Adventures as much as Chris Allan defined the later ones. The script for this issue by Doug Brammer certainly seems to be going for a feel closer to that of the Fred Wolf cartoon (and thus, the really early issues of TMNT Adventures) and Mitchroney draws the story that way, including things like April’s yellow jumpsuit, Channel 6 and the Turtle Van (all of which had been purged from the comic by this point in the narrative). There’s even a panel on page 16 where a girl looking exactly like Irma from the Fred Wolf cartoon but with blonde hair and no glasses comes rushing in to give April an update on the Manmoth. Mirage had been having legal issues with Fred Wolf over scripts and characters exclusive to the cartoon at the time, so I’m left with the impression that her features were slightly redrawn and recolored to make her less Irma-like for legal reasons. 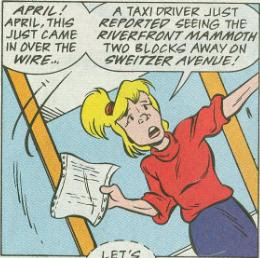 The story, while a nice throwback to the more carefree and whimsical days of the title’s youth, rubs off like a really bad episode of the Fred Wolf cartoon. There is nothing in this script that hangs together. For example: The Henchmen decide to lure the Manmoth back to the museum by leaving a trail of daisies for it to follow. But the Manmoth was already heading toward the museum so that it could be with the dinosaurs it recognized from its memories (wow, that’s bad). Then later, the Turtles find the alley where the henchmen met the Manmoth and find signs of a struggle. So did the Manmoth go to the museum on its own, follow a trail of daisies or somehow get jumped by two unarmed teenagers and dragged there against its will?

This was some David Wise-level of terrible, that’s for sure. In fact, I’d almost have thought Wise had written this issue himself if it weren’t for the fact that it wasn’t a recycled He-Man and the Masters of the Universe script but with all the proper nouns changed.

“…And Deliver us from Evil” is definitely a filler issue, taking what’s clearly either a shelved script or a completely shelved comic and publishing it with a sloppy prologue. Why this was necessary, my only guess is that Chris Allan was being overworked, having to turn in pencils for TMNT Adventures and the April O’Neil miniseries all at once, plus covers and so forth, and couldn't meet the deadline. Filler issues like this happen all the time in the world of comics and we should at least be grateful that we got some “new” content dressed with a prologue for context’s sake. There will be filler issues far worse than this later on in the series, combining insipid “toddler Turtle” era stories with reprints of older issues to take up space. By comparison’s sake alone, TMNT Adventures #41 is a masterpiece.

Grade: D (as in, “David Wise probably would have crammed in three other half-baked plot lines and at least seven or eight fourth-wall gags into this issue if he’d written it, I suppose”.)