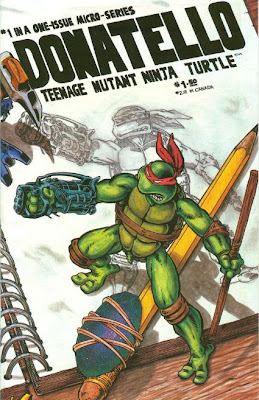 “Kirby and the Warp Crystal”

In April’s apartment, Raphael is furious that the hot water heater has broken and he can’t take a shower. Reluctantly, Donatello heads to the basement to repair it, though April warns him to keep an eye out for Kirby, the guy she’s rented the basement office to. Entering the basement, Don is suddenly attacked by a weird winged creature. Don chases it around a corner, but it vanishes in a dead end. Hearing noises coming from the basement office, Don sneaks over to take a peek. 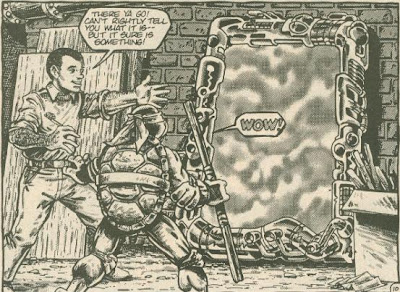 Inside, Kirby is hard at work at his drawing table. He has a weird crystal tied to a pencil, causing everything he draws to jump off the page and come to life shortly before disappearing. One of the creatures startles Donatello, blowing his cover. Kirby thinks Don is an alien, returning for his crystal and offers to give it up, though Don sets the record straight. Kirby explains that he found the crystal in a pile of coal a few months back and discovered its powers by accident. He’s become so used to his weird drawings coming to life, he doesn’t even find Don frightening at all! Kirby confesses that all his drawings only come to life for a few minutes before vanishing, all save one thing: a weird dimensional gateway. Deciding “why not?”, the pair traveling through the door. 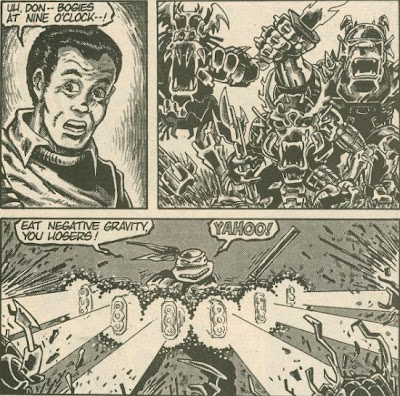 They arrive in a fantasy world populated by Kirby’s drawings. Much to their horror, his monster drawings are attacking all his human drawings… and winning! Don springs into action, helping the warriors in battle, while Kirby stays behind and comes up with a plan. Realizing his drawings last longer in this world, he breaks out his sketchbook and doodles a picture of Don with a high-tech gauntlet on. A “gravitic equalizer”, it causes all the monsters Don zaps with it to float up into the sky. Unfortunately, the batteries die quickly. Not short on imagination, Kirby quickly draws a giant mech, a “mobile creep trapper”, that begins plucking up all the monsters and stuffing them in its mouth.

Still, there are too many of the fiends and Don leaps back into battle to help the warriors. Brainstorming, Kirby realizes that all the monsters he’s drawn are still in his sketchbook. Working at double-speed, he alters each monster drawing with chains and handcuffs. The bindings then appear on the monsters, incapacitating them all. The day saved, the warriors thank Kirby and promise that he’s welcome in their kingdom any time. Kirby, as it happens, wouldn’t mind exploring this world some more. 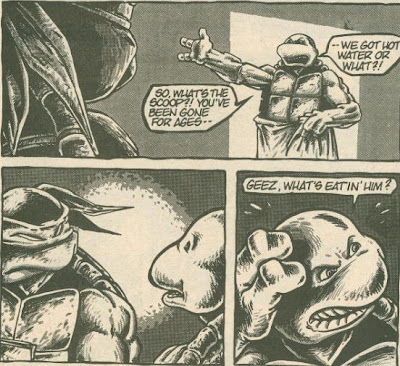 No time for that, however, as the portal he and Don came through begins to shrink. Kirby shoves Don through the doorway first, knowing that there’s only enough time for one of them to make it. Don arrives back in the basement office and right before the portal vanishes, a paper airplane flies through. Don unfolds it and then solemnly returns upstairs. In the apartment, Raph is about to berate him for not fixing the hot water heater, but one grim look from Don shuts him up. Entering his bedroom, Don looks at the paper again. It’s the drawing Kirby made of Don with the “gravitic equalizer”. Scribbled is the message:

“Don,
Life at best is bitter sweet. Take care of yourself!

*This story is continued from TMNT (Vol. 1) #8.  The story continues in Leonardo (microseries) #1.

*The history of the warp crystal and what it was doing in April’s basement will be revealed in TMNT (Vol. 4) #22.

*Don says that he and his brothers have had “almost sixteen years of (ninjutsu) practice", just in case you like keeping track of their ages.

*According to the Turtle Tracks editorial in this issue, Laird had Jack Kirby-himself approve the roughs of this issue before he would allow it to be published.

*This issue also featured a pin-up page of Usagi Yojimbo and the Teenage Mutant Ninja Turtles by Stan Sakai; his first of many! 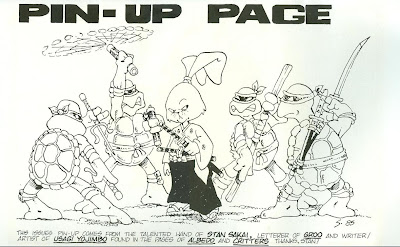 “Kirby and the Warp Crystal” is an issue that definitely has a lot of heart in it. Eastman and Laird were never shy about their respect and admiration for Jack Kirby, a writer/artist that the comic book industry as we know it owes a fundamental debt of gratitude to. This entire issue seems to be their love letter to the man, beginning with a lengthy editorial from Laird on how Kirby shaped his career in comics, then featuring a story where Kirby-himself is ostensibly the star and finally ending on a second editorial from both Eastman and Laird urging readers to sign a petition requesting Marvel Comics to return Kirby’s original artwork to him (a controversial subject that remains a hot button to this very day).

This issue is all about Jack Kirby. At times it might rub off as a bit sycophantic, considering Kirby was still alive when it was published, but a good story is still a good story whether it was created as a “love letter” to an industry trendsetter or not. Whatever the case, Eastman’s and Laird’s infatuation with Kirby would eventually peak in the 90s, where they stopped just short of introducing a fifth Turtle aptly named “Kirby” (a concept intended for a fourth live action film that never happened).

In the opening editorial, Laird discusses the inherent difficulties in trying to “ape” Jack Kirby’s distinctive style and why most of those who attempt it (including himself) aren’t likely to succeed. His points are well made, though I think he did an adequate job of getting the immediately recognizable “Kirby beats” down on the characters. True, it doesn’t look like Kirby drew them himself, but the Fourth World elements are easily distinguishable (more-so in the monsters, who get more panel-time than the human warriors).

The story is definitely another one of those “why does weird shit always happen to the Turtles no matter what seemingly mundane thing they do?” scenarios, and the entire adventure seems to end as quickly as it began (despite a brawny 32-pages), but the imagination present in the Kirby dimension is what makes the whole situation extremely fun. Kirby drawing all sorts of high-tech weapons for Don to use in battle is great, though I thought his ultimate solution to the problem was even more creative. I also enjoyed that all of Kirby’s weapons and drawings were nonlethal, offering a nice bit of subtle characterization to the artist; who comes off as something of a gentle pacifist without beating the audience over the head with that quality.

The 4Kids TMNT series adapted this issue for the episode “The King” and I’d have to say that it is probably one of their most accurate adaptations of any issue. The “nonlethal” aspect of the fighting assuredly helped with that end of things, but the story beats and much of the dialogue remained intact, too. There’s very little “padding” in the episode; it really feels like this issue made it directly to your screen unmolested. “The King” was made after Jack Kirby’s death, giving the story an entirely different dimension. As a post-mortem dedication, the last words of the issue become even more powerful.

“Kirby and the Warp Crystal”, at a glance, might seem like another meaningless one-off adventure, but it’s the meta-textual qualities that make it one of the original volume’s most memorable and moving stories. And even removing those contextual aspects, it’s still a fun adventure with a lot of imagination.

Grade: A- (as in, “And Superman the Animated Series did a pretty good memorial to Kirby, too”.)