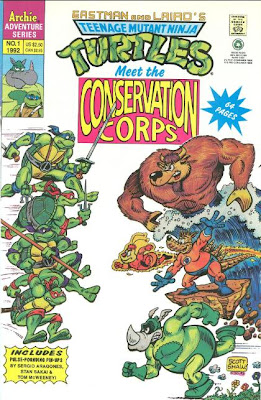 In the lair, Mike, Leo and Don lay in wait to pummel Raph with water-balloons the moment he steps through the entrance. They pummel Splinter instead. As Splinter begins berating them for wasting water, a very precious resource (hey, it only covers 75% of our planet, after all), an emergency broadcast from April O’Neil draws their attention. The Atlantic Ocean has been defiled by a major oil spill and the Turtles decide to go see what they can do to help. 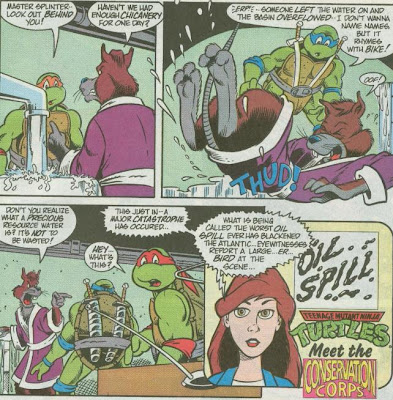 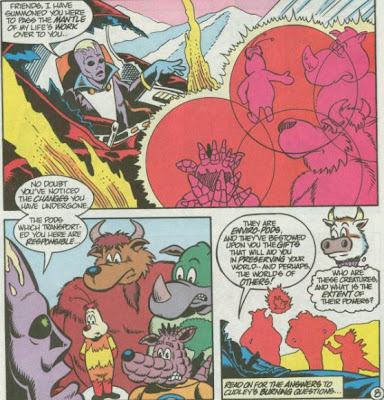 Out in the Atlantic, the Turtles and Splinter have taken a boat to the source of the oil spill. Cudley flies down from the sky to tell them of the creatures he found, but a worse creature interrupts him; a giant oil-covered duck whose mere presence kills all wildlife around him. The duck explains that the radioactive oil within the punctured tanker killed his family and mutated him into a very angry monster. The duck attacks the Turtles and destroys their boat. Fearing the worst, Cudley leaves to retrieve the creatures he saw earlier.

Finding them, the Conservation Corps mistakes Cudley for an “ecological mishap” and attack him. Cudley swallows them and takes them back to the oil spill. While Cudley was gone, Splinter sank beneath the waves and Don went down after him. Water Buffalo dives down and creates an air bubble to bring the pair back to the surface. Recovering, Splinter recommends the two teams work together to defeat the polluting duck.

As the duck proceeds to pollute the ocean with more oil, the teams attack. Their combined skills knock the fowl out cold and the Conservation Corps finally gets a chance to properly introduce themselves. Apparently, according to this narration box here, the duck is called “Oily Bird” (I’d have thought “Water Foul” would have been a better name, but whatever). Anyway, he revives, hears the story about Benevolence and decides to takes the alien's powers for himself. Vomiting oil onto the heroes, Oily Bird declares that he will fill the world’s waterways with oil, creating global warming, because if he can’t have a clean planet then no one else can, either. As Oily Bird flies away, he shouts that he’s created four oil leaks to keep the good guys busy while he tracks down Benevolence.

Hearing the news of the spills over Don’s radio, the teams decide to break up into pairs to deal with each threat. But as Cudley leaves with the heroes and Splinter stays behind, the sensei is kidnapped by Oily Bird.

Arriving in the Canadian tundra, Raph and Firefly spot a geyser of oil. Raph plugs the geyser with a pillar of ice and Firefly melts it airtight, ceiling the oil back in the ground. In the canals of Venice, an oil leak has sprung below. Water Buffalo parts the canal and Don plugs the leak with rocks. At Hoover Dam, Stonehedgehog uses his rock powers to plug a leak in the Colorado River while Mike rushes to the Dam to investigate some smoke. Mike finds the turbines on fire thanks to oily water, but Stonehedgehog uses a rockslide to create a tidal wave that washes the turbines clean. At the Amazon River Basin, the oil leak has caused a forest fire. Leo uses his katana to create a fire break while Green Horn rescues the animals. Green Horn then uses his vegetation powers to create a wooden plug for the leak. Green Horn is proud of himself, as “the rainforests are the lungs of the planet”. 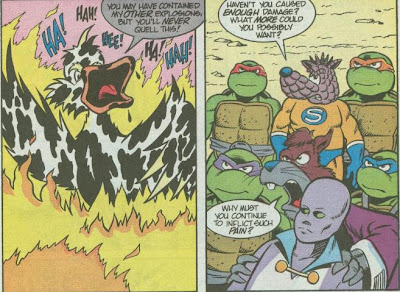 At the South Pole, Oily Bird finds Benevolence and lands. He prepares to enact his plan when suddenly the TMNT and the Conservation Corps arrive in the nick of time. Oily Bird isn’t deterred, as he draws enough oil to the South Pole to create a massive explosion, knocking Earth out of its orbit and toward the Sun. The TMNT and the Conservation Corps stay behind to deal with Oily Bird while Cudley flies off to check the situation in space. As Oily Bird trounces the heroes, Benevolence uses the last of his ship’s power to fly it into the geyser of flame, putting it out and restoring Earth’s orbit. Unfortunately, this causes his ship to explode. The explosion knocks Oily Bird out, though Benevolence has reached his last leg.

Benevolence makes the Conservation Corps vow to protect the environment on Earth and across the universe. He then asks Cudley to take him and Oily Bird back to his dying homeworld, as it is beyond repair and there’s nothing Oily Bird can do that could make it any worse. Cudley agrees and takes them back to Benevolence's planet, which is a total Hellhole. Benevolence promptly dies, but not before making Cudley promise to tell the Conservation Corps AGAIN that they must take care of the environment. 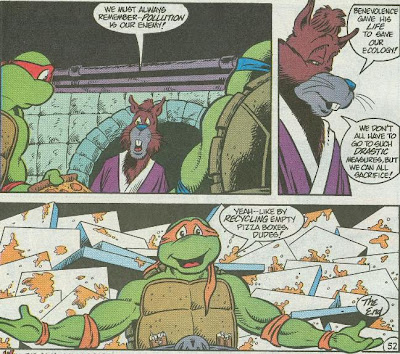 Suddenly, with their telepathic link to one another, The Conservation Corps begins picking up signals from their mysterious fifth member somewhere out in the Pacific Ocean. Bidding the Turtles farewell, the Conservation Corps begin their journey to find their lost “brother”. Returning to New York, the Turtles decide to celebrate their victory with some pizza. Splinter warns them not to spill any, as that would be a form of pollution. Mikey promises to recycle his pizza boxes.

I knew this day would come. When I first sat down to review every one of Archie’s TMNT Adventure comics, I knew that meant I would one day have to read TMNT Meet the Conservation Corps #1. God help me, that day is today.

Steve Murphy’s (Dean Clarrain’s) eco-preaching could get pretty bad in the pages of TMNT Adventures, but never like this. Never like this.

There’s no entertainment value to this comic nor is there even an attempt at such a thing. No kid would want to buy this. No kid would want to receive it as a gift. No kid could ever like it. It seems more of a “prestige” sort of thing; something Archie or Mirage could show off to the press. “Hey, look, our comics are educational! We’re teaching kids about the dangers of pollution! It’s not all violence, really!” In that regard, TMNT Meet the Conservation Corps is completely transparent trash, intended to make a huge fuss over its educational nature whilst achieving no actual effect on children... as the product is so insipidly stupid no child would ever take it seriously. If they could even read past the first three pages without quitting, that is.

I had to live through the era of “Captain Planet and the Planeteers” and even as an elementary schooler being force-fed this nonsense in the form of “totally fun media”, I was smart enough to know when bad writers and bad artists were trying to “trick” me into learning lessons about the environment. I could tell when a show or a comic was talking down to me and that’s precisely what this comic does; it talks down to children.

You can deliver messages to kids through metaphors and allegories and morality plays and they’re perfectly capable of absorbing the lesson and putting it into practice. Nearly every episode of "Avatar: The Last Airbender" has some sort of moral to impart on the viewer, yet it is always wrapped in an engaging plot. Unfortunately, soap box-style writing is easier, so many of the less-talented or less-enthusiastic writers of the cartoon and comic book world choose to take that route instead. So all too often we end up with stuff like this, which pollutes the airwaves and the magazine racks as badly as any oil spill pollutes the ocean.

And it’s not like, “Oh, it was the 80s/90s and everybody wrote cartoons like kids were idiots!” is a valid excuse. J. Michael Straczynski wrote some incredibly smart episodes of “The Real Ghostbusters” that centered around valuable life lessons for kids, but always wove them into the plot instead of having the characters directly inform the audience as though they were too stupid to pick up on the point. “The Grundle” dealt with heavy messages about talking to strangers and child molestation while “Slimer, Come Home” dealt with runaways joining suicide cults! Never did the episodes feel like children were so braindead they needed the characters to explain the moral in plain language.

But Steve Murphy, Paul Castiglia and Dan Nakrosis are no J. Michael Straczynski, that’s for sure, and none of them seemed to have a very high opinion of children’s intellects.

But hey, at least it’s recyclable.

Grade: F- (as in, “Figure any of them cared that trees were dying in order to print their terrible, terrible comic book? I presume the only paper they cared about was the sheets their checks were printed on”.)