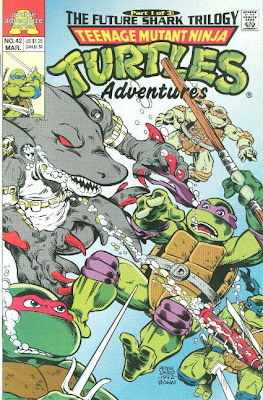 In the sewer lair’s gym, Ninjara and the Turtles are busy working out, though Ninjara is distracted with how impressive the whole lair actually is. Suddenly, a time-slip opens up and out pops a middle-aged Donatello and Raphael. They insist that their younger counterparts follow them back to the future, as the time-slip will only remain open for a short time. Suddenly, they see Splinter (who is shocked) and bow with sullen respect. They ask Splinter to accompany them back to the future as well. 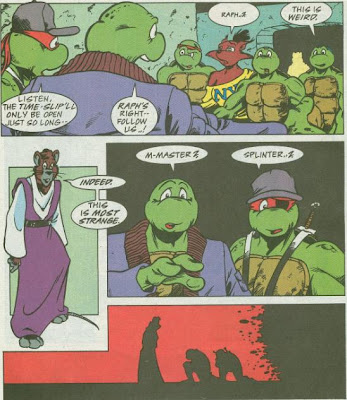 In the future (a dystopian New York full of derelict buildings and rising water levels swamping the streets), the Shredder and Verminator-X operate machinery in their headquarters (a disguised tenement building). Verminator laments that they were unable to procure the Black Stone of Mecca during their last trip to the past, but Shredder tells him to save it as their time-slip generator opens up. Armaggon comes stomping through, having collected the salvage from Null’s Deepdump operation as well as an unexpected hostage: Merdude. He asks how their mission to the past went and Shredder has to explain their failure. A fight between Armaggon and the Shredder starts to break out, but Verminator stops them, explaining that he might know of a power source just as good as the Black Stone. 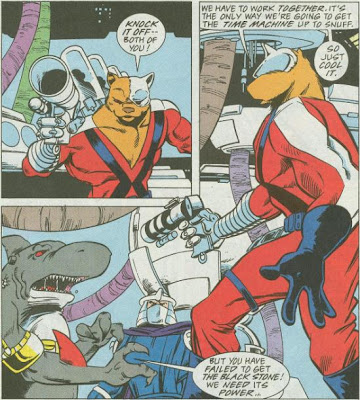 On the roof of Turtleco, future-Don, Future-Raph, Splinter, Ninjara and the Turtles arrive through a time-slip, only to be attacked by flying defense drones called Orni-Coppers. Future-Don shuts them down, explaining that he built them to defend Turtleco, though they malfunctioned when they registered two Donatellos and two Raphaels at the same time. Entering through the roof, future-Don invites them into his luxurious mansion. Apparantly, his knack for electronics turned Turtleco into a huge success and made him a billionaire. Young-Don is suitably impressed with himself.

Splinter, Leo and Mike finally decide to start asking the big questions, starting with where their future counterparts are. Future-Raph reveals that Splinter died from old age awhile ago, but a more gripping tale awaits them in regards to what happened to future-Leo and future-Mike and just why they brought them to the future. 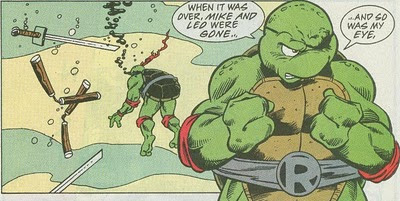 Not long ago, Turtleco was infiltrated by Armaggon, who was trying to steal the experimental time-slip generator from Don’s lab. The resulting fight led out the window and into the flooded streets below. Although Armaggon was in his element, the Turtles still had him on the ropes. That is until the Shredder and Verminator-X showed up and ambushed them. As the Turtles struggled to recover, Armaggon nailed them all with a torpedo. When Raph came to, his eye was missing along with Mike and Leo; only Don being accounted for in the aftermath. And to make matters worse, while they were out, Armaggon succeeded in stealing the time-slip generator.

Back at the Shredder’s HQ, future-Leo, future-Mike and Merdude rest unconscious within stasis tubes as the three villains look on, menacingly.

*The Turtles briefly visited this future before in TMNT Adventures #7.

*Shredder and Verminator-X failed to obtain the Black Stone of Mecca and escaped through a time-slip to the future in TMNT Adventures #36.

*This issue also features bonus pin-ups of the four Turtles and Splinter by A.C. Farley.

*This issue was reprinted in the UK by Fleetway as TMHT Adventures (#78).

I started this review blog on June 25th, 2008. And from my very first post (TMNT Adventures miniseries #1), all I wanted to do was hurry up and get to the damn “Future Shark Trilogy”. I originally conceived TMNT Entity as a site strictly for reviews of TMNT Adventures, but I quickly got distracted reviewing TMNT comics from other publishers, as well as doing research articles and editorials and what-not. Thanks to all that, it took me three years to get to the damn “Future Shark Trilogy”.

TMNT Adventures had been “growing up” for a while before this story arc, with lots of narrative turning points and milestones bringing it away from its goofier roots and closer toward a darker action adventure series that could compete with the contemporary superhero titles of The Big Two. However, it is “The Future Shark Trilogy” that really took the book to an entirely different level, not only setting a tone that would remain for the duration of the series, but opening up a major pool of plot threads that the book would proceed to draw from all the way until the end. In both terms of atmosphere and story focus, you can almost bisect TMNT Adventures into “before the Future Shark Trilogy” and “after the Future Shark Trilogy” segments.

That’s how important it is to the overall sequence of the entire series.

Of course, it isn’t without its inconsistencies and setbacks; the most major of which I’ll comment on in the next review. But as far as this issue is concerned, its only noticeable flaw is how abruptly it begins. “Hey, we’re you from the future! Come with us for reasons we don’t want to explain right now!” “Okay.”

But while the Turtles being drawn into the conflict feels a bit rushed, this issue actually feeds on the loose ends of two previous stories from TMNT Adventures and Mighty Mutanimals, weaving those seemingly unrelated threads together into a much larger tapestry. So the whole situation doesn’t come completely out of the blue, which works in the arc’s favor.

Steve Murphy (Dean Clarrain) takes the opportunity to draw inspiration from the Mirage side of things, bringing over future-Raph’s missing eyeball and a reference to the frontispieces of Tales of the TMNT with future-Raph spouting, “Lemme tell ya a story…” In turn, the Mirage series would draw inspiration from TMNT Adventures, having the world flooded and doing stories centered in cities with massive, dilapidated skyscrapers poking out of the swamps. Hooray for cross-pollination! 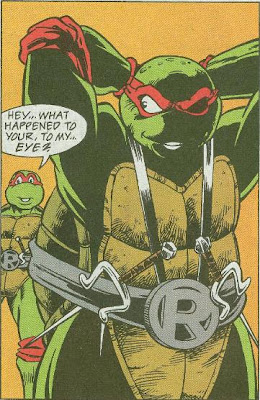 Even considering the seventeen pages that come before it, the real meat of this issue is in future-Raph’s brief back story regarding just what the heck is going on. It’s short and to the point, which is nice, and shocking in its brutality. Yes, that is blood bubbling up from Raph’s gauged-out eye socket. Archie had an issue with red blood at the time, so Barry Grossman was often forced to use black ink to substitute for it. But blood is blood.

I think what’s best is that the flashback is used to end the issue, with Raph’s unconscious, bleeding body being the second-to-last panel of the book. The striking and grim image leaves you with the impression that “this isn’t a funny book for toddlers anymore” and the stakes have just gotten much, much higher. Even though the predicaments happen to the future versions of the Turtles, that doesn’t alter how much the game has just changed. All of a sudden the good guys can get maimed (Raph), die (Splinter) and the villains are capable-enough to win decisive battles. In one issue, TMNT Adventures just grew the Hell up.

Chris Allan co-plotted the story, though to what extent I don’t really know. His art, though, is some of his absolute best. There’s such a tremendous range of expressions on the characters, particularly Armaggon, who switches gears from humorous to “holy shit” like nobody’s business. A.C. Farley’s bonus gallery is a cool extra, too, but to repeat my criticism from the Mutant Universe Sourcebook series, the guy doesn’t do “cute” very well.