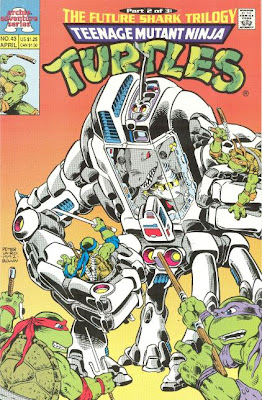 From the roof of Turtleco, future-Don begins recounting to the others the tale of how this predicament came to be. After global warming melted the polar icecaps and all coastal cities (including New York) were flooded, the sewer rats began infesting all the buildings. Donatello teamed with a gifted mutant cat named Manx to create a prototype of the Orni-Coppers; flying drones that could exterminate New York’s rat problem. The devices were successful and turned a tidy profit, but they raised the wrath of Ha’ntaan, the Rat King, who waged war against the Ninja Turtles. After a lengthy battle, the Turtles won and the Rat King fell into retreat. 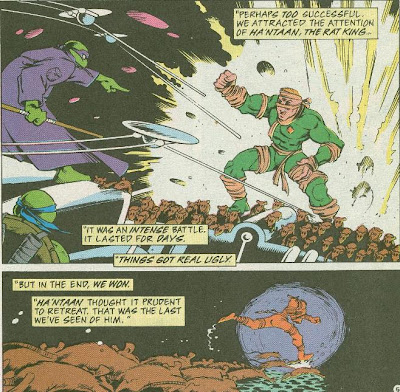 Wealth and power wasn’t enough for Manx, however. He wanted immortality. Using his engineering skills, he created cyborg prosthetics and implanted them into his body. His quest for immortality eventually drove him to the side of evil and he became known as Verminator-X.

Meanwhile, Donatello began studying time travel and developed the time-slip generator. Needing a power source, Donatello remembered the old Crystal Converger given to him by a dying alien to locate the three Eyes of Sarnath. Knowing that Shredder still possessed one of the Eyes, Don used the Converger to locate another Eye and used that to power the generator. His tests were successful, but the Eye was running low on power. Eventually, a mutant shark named Armaggon broke into his lab and stole the time-slip generator and the Eye of Sarnath with it.

Later, Armaggon teamed with Shredder and Verminator-X and (after a battle recounted in the previous issue) stole Don’s second time-slip generator; this one powered by a miniature nuclear reactor. With two of his brothers missing, Don had no choice but to build a third time-slip generator (this time powered by ConEd, resulting in a hefty electric bill) and summon the Turtles of the past for aid.

As future-Don gives this dissertation, future-Raph pulls regular-Raph aside for a little chat. He tells Raph that a lot of awful things are going to happen to him in the near future and that his only way to get through them unscathed is to “lighten up”. Raph blows off future-Raph’s advice, citing the Turtles’ inability to breed and the fact that he’s destined to outlive Ninjara and all his other friends by centuries as reason enough to be a sourpuss. Future-Raph just tells him not to let his friends, Ninjara especially, slip away… just as he did.

Elsewhere, Armaggon begins enhancing his time-slip generator with the salvage taken from Null’s Deepdump facility. Thinking to himself, he recounts how his whole scheme began. After stealing the first time-slip generator, he encountered Verminator-X who told him that the Eye of Sarnath he was using was running low on power, having only one or two jumps left in it. In exchange for a partnership, however, he was willing to tell him where in time he could find another Eye of Sarnath. 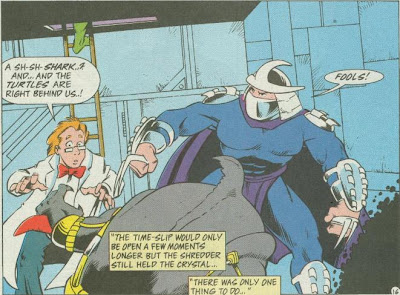 Verminator-X told Armaggon of a time when the Shredder and Baxter Stockman were using an Eye of Sarnath to shrink buildings. Using the time-slip generator, Armaggon planned to ambush the Shredder while he was escaping underground from a battle with the Turtles. Unfortunately, the Shredder couldn't be ambushed so easily and put up a fight. With the Turtles not far behind, Armaggon offered to give him escape through the time-slip in exchange for the Eye (leaving Baxter Stockman behind to face the Turtles alone). Immediately after arriving back in the future, the time-slip generator exploded. The trio of villains then stole a second generator from Donatello and began gathering artifacts with which to enrich its power.

Installing the last of these artifacts (Shredder’s Eye of Sarnath, nuclear fuel from Null’s Deepdump facility, the bones of the Roswell alien, Hitler’s brain and the White Stone of Mecca), Armaggon is finally set. Verminator laments that without the Black Stone, the White Stone cannot grant him immortality, though Armaggon reassures him that with a functioning time-slip generator, they’ll have ample opportunities to try and steal the Black Stone again. 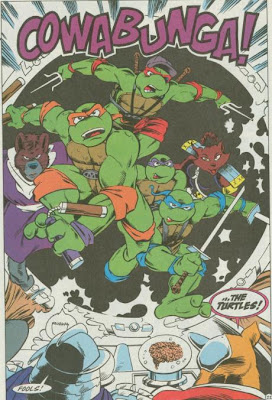 Arriving in an eerie swamp with no way home, they realize they may be stuck there for a while…

*The Turtles began collecting the Eyes of Sarnath in TMNT Adventures #3.

*The Shredder escaped to the future following the ending of TMNT Adventures #4. It is said that Baxter Stockman was “left to face the Turtles alone”, implying he was sent back to prison/the nuthouse (he is never seen or mentioned again).

*This issue was published in the UK by Fleetway as TMHT Adventures (#79).

Wow, did they really just acknowledge the Fred Wolf cartoon episode adaptations as actually happening? Good god, there’s a blast from the past.

As you may or may not know, TMNT Adventures began as nothing but adaptations of the Fred Wolf cartoon. However, arguments between Mirage and Fred Wolf over rights to episode scripts forced TMNT Adventures to switch over to original content starting with issue #5. This unceremoniously left the Eye of Sarnath arc from the cartoon hanging unresolved and no references to it, Baxter Stockman or anything else from the Fred Wolf adaptation issues were ever made again.

“Past Lives”, the middle section of “The Future Shark Trilogy” is pretty much nothing but exposition. A whole crap-ton of exposition. The stories future-Don and Armaggon summarize are definitely cool, and I’d have loved to have seen the war with the Rat King in full, but the end result is something rather confusing that refuses to tessellate even after you figure it all out.

First of all, there are no less than three fucking time-slip generators for you to keep track of. 1: Don’s first one that was stolen by Armaggon and blew up. 2: The second one Armaggon stole from Don and pimped-out with anti-Semite grey matter and Martian femurs. 3: The third one Don built and used to Shanghai the Turtles from the past.

God dammit, this shouldn’t be that complicated. But it gets worse.

THIS SHOULDN’T BE THAT COMPLICATED.

I’ve gotten some criticism from a few people for not rating certain issues of TMNT Adventures highly enough, and I don’t blame you for seeing it that way. I tend to reserve the “A” grades for the flawless, cream-of-the-crop minority issues, while rating the still-superb issues at a “B+”. “The Future Shark Trilogy” is an awesome story full of great art and action and I love how it references stories from the beginning of the series that we all thought were ancient history.

However, the error-ridden and almost incomprehensible time travel logic does bring it down a peg. I know it’s one of those things that only bothers you “when you think about it”, but I wouldn’t be doing my job reviewing these stories if I didn’t “think about it”.

So for the listed imperfections, I’m sorry, but I can’t give this issue a perfect grade. It’s still an awesome issue. Just don’t think about it.

Grade: B+ (as in, “But I love this face Armaggon makes for some reason”.) 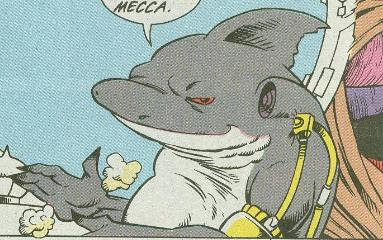