Whatever Happened to "The Forever War"?

So what, exactly, was “The Forever War”? You hardcore fans probably know all about it, you old school readers of TMNT Adventures might vaguely recall advertisements for it and you newcomers to the Ninja Turtles have probably heard second-hand yammering about it by now as “the greatest thing that never happened”. Whether that last scrap of hyperbole is true or not, we may never know, as “The Forever War” has been “Forever Delayed”.

“The Forever War”, by TMNT Adventures regular writer/artist duo of Steve Murphy (under pseudonym Dean Clarrain) and Chris Allan, dates back to mid 1995. TMNT Adventures had just completed its latest story arc in “The Moon Eyes Saga” and issue #70 ended with this advertisement: 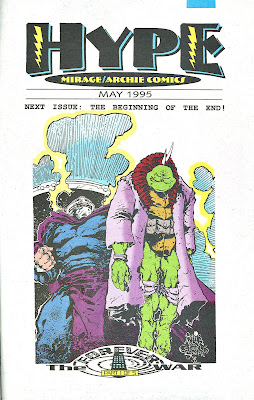 “The Forever War, part 1 of 5”. “Next issue”. “The Beginning of the End”. TMNT Adventures #71 looked to be pretty epic. So, what did we get when issue #71 finally rolled around? 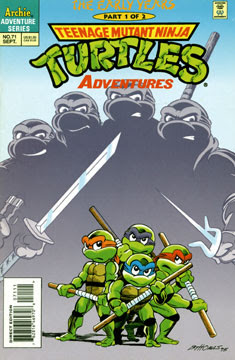 “How the Turtles Got their Weapons, part 1”; a filler story arc by substitute writer Steve Sullivan and substitute inker-turned-artist Brian Thomas. TMNT Adventures #71 and #72 carried this saccharine story arc, which was actually about the length of only one full issue; it was broken in two and the remaining page space was filled with reprints of stories from TMNT Meet Archie #1. And following issue #72, TMNT Adventures was cancelled.

Archie Comics made an attempted revival of the TMNT in January of 1996 with their “Year of the Turtle” three-part miniseries. By writer Dan Slott and artist Hugh Haynes, “Year of the Turtle” acted as a functional finale to TMNT Adventures while attempting to double as a fresh start (it was advertised as “a new beginning”).

But whatever happened to Steve Murphy and Chris Allan’s intended finale, “The Forever War”?

Managerial politics, that’s what. In a series of posts on his now-defunct blog, “The 5th Turtle”, Steve Murphy discussed at length the situation he was placed in during the last few years of TMNT Adventures, caught between his own creative desire to tell more challenging stories and Archie Managing Editor Victor Gorelick’s decree that the title be lighter and more fun.

“I had just finished work on ‘The Moon Eyes Saga’ story arc (TMNTA #67-70), wherein Raphael travels to Alaska seeking the love of his life, Ninjara, only to romantically lose her to another. It was heavy stuff for a kid’s book – at least by the standards of the day – and I was once again at odds with the two bigwigs at Archie Comics: editor in chief Victor Gorelick and publisher Michael Silberkleit, both of whom thought we were ‘going too far’ in terms of adult themes. Both men, as well as their distribution guy, Fred Mauser, had been on my ass about this several times before, most heatedly when we put out the first ‘future Turtles’ story arc, wherein Chris and I developed the character of Hitler’s brain (but that’s another story).

“Victor and Michael wanted to know where the book was going with issue 71, and when I told them we would be revisiting the future (the Greenhouse Earth future, another notion which freaked them out) for a 5-issue story arc featuring the return of the Shredder – a totalitarian Shredder (not the buffoon of the cartoon) – they popped their toupees. And said they wanted me off the book.”

“A few months earlier Mirage began the second volume of the Teenage Mutant Ninja Turtles comic book series, deciding, in an inverted Sisyphian logic, that the greatly added expense of printing in color would boost the sagging sales and increasing losses of the first volume series. This, of course, was new ground, a territory previously ‘owned’ by the TMNT Adventures title, but more so by Archie Comics, who had the exclusive right to print in color for newsstand distribution.

“Not that Mirage was going newsstand with volume two. But it was entering the direct-sales market with a color title. The big enchiladas at Archie Comics didn’t like this, as they too had their eyes on the direct-sales market since they were going through an across the board decline in newsstand sales as the number of children reading comics plummeted with the increased competition from video games. They were secretly making plans for a more direct-sales oriented TMNTA comic. Plans that did not involve me or anybody else at Mirage.”

The combination of Archie’s aggressive disapproval of Murphy’s storytelling and what Murphy perceived as total indifference to his circumstances from Mirage-founder Peter Laird eventually led Murphy to quit the title and pursue other projects away from both companies for the next five years (not returning to Mirage until 2001). Archie would get its creative control over TMNT Adventures, but only for a total of five issues (TMNTA #71-72, Year of the Turtles #1-3) before calling it quits on the whole thing.

Murphy’s and Allan’s only “return” to that universe of characters would occur in November of 1996, with a three-issue arc in the furry-marketed magazine “Furrlough” featuring their joint-owned character Ninjara. The story took place in the future of TMNT Adventures, though outside of an advertisement of Ninjara declaring “I’m not hanging with teenagers anymore!” no references to the Turtles were ever made for obvious legal reasons. The story arc ended on a cliffhanger and was never completed due to lack of interest from both writer and artist. 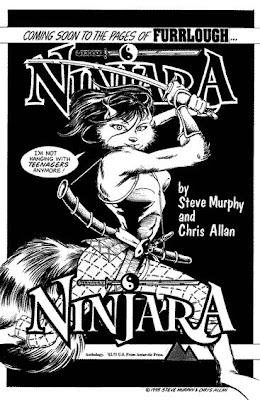 But what was “The Forever War”? In a June 9th, 2008 interview with Newsarama’s Benjamin Ong Pang Kean, Murphy described it cryptically as both “just the next story arc in the TMNT Adventures title,” and “Another ‘Future Turtles hook up with today's Turtles’ story arc, one that features the final battle with the Shredder.” Aside from that, we don’t really know much else about the actual contents of the story arc, save what we could glean on our own from the five penciled and inked covers released by artist Chris Allan: 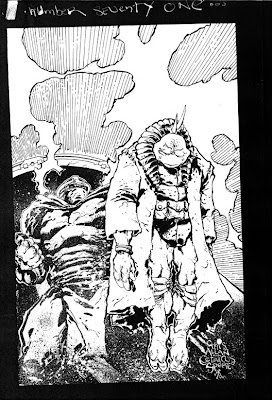 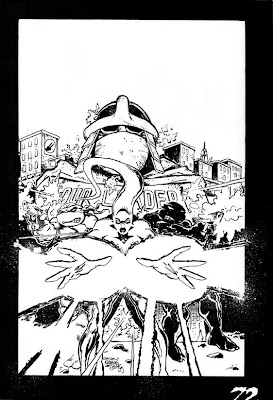 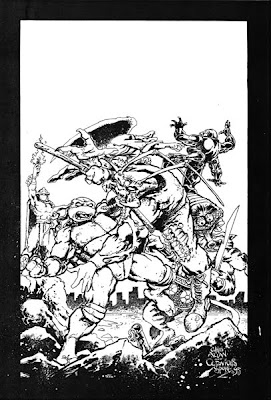 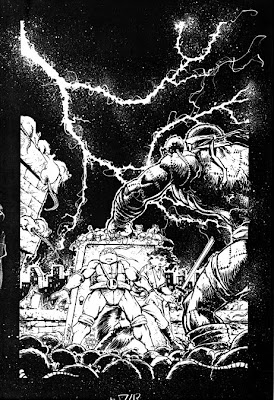 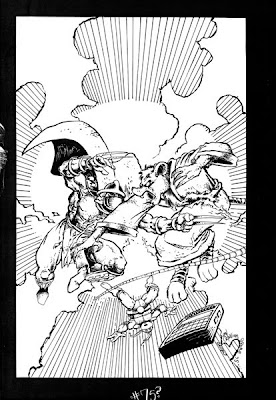 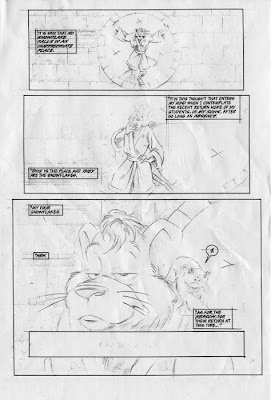 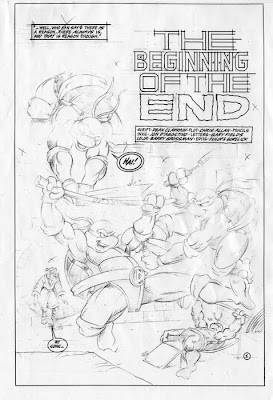 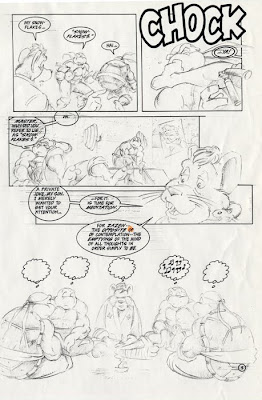 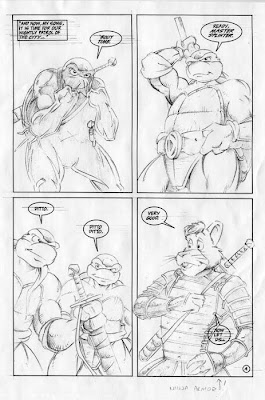 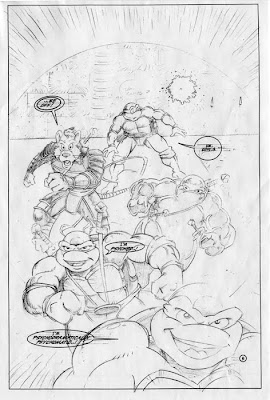 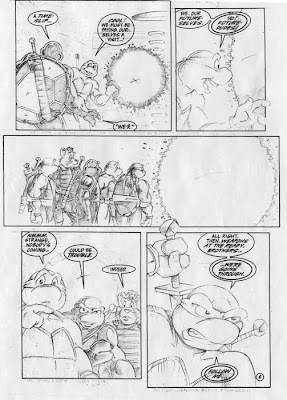 By the turn of the century, the future of “The Forever War” would proceed to go on something of a rollercoaster ride in regards to Mirage’s intent to see it completed and published, with more promises made and broken than any fan cares to keep track of.

But the fans’ patience were eventually rewarded in 2009, when Mirage officially announced that Murphy and Allan had been signed to complete “The Forever War” in a five-issue miniseries as part of the “25th Anniversary Shell-ibration”.

An advertisement for the miniseries appeared in Tales of the TMNT #58: 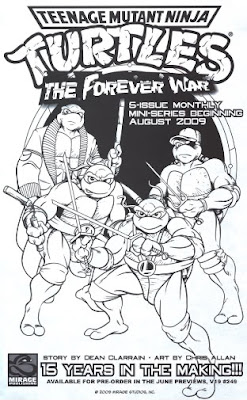 And a trade paperback collection of relevant TMNT Adventures issues titled “TMNT: Future Tense” was published in July, 2009 as a primer for the miniseries (solicits claimed, “All issues feature the ‘future-Turtles’ and act as a lead-in to the upcoming all-new Forever War miniseries!”): 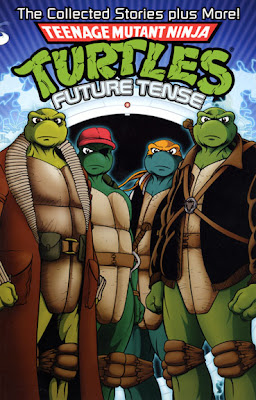 A hefty section of the aforementioned Newsarama interview focused on Murphy’s plans for “The Forever War” and what changes would be made from the original scripts and plot conceptions. “The current plan is to release it as a monthly black and white story arc under the original Archie Teenage Mutant Ninja Turtles Adventures title. The first issue would come out in May 2009… it will have many elements of the original storyline, while at the same time cutting the cast down a bit… the scenes depicted on the five covers will not necessarily be occurring in the revamped story line.”

While this was going on, Chris Allan was hard at work preparing for the miniseries. In addition to the promotional art and “Future Tense” cover already shown, Allan also drew preliminary thumbnails for five new interlocking covers:

When May of 2009 rolled around, the book was still not on the shelves.  Solicitations from Dan Berger published in the letters page of TMNT (Vol. 4) #30 (May, 2009) advertised the Future Tense trade, but contained this disappointing nugget: "This book introduces the 'Forever War' 3-issue miniseries and will be released in July."  Yes, "3-issues".  So evidently, in addition to all the delays, the miniseries was scaled back from five issues to three.

There was also a solicitation for the "Forever War" miniseries: "'Forever War' mini-series, featuring all-new material by Clarrain and Allan, will begin shipping in October with issue #1.  #2 ships in November and #3 in December."

However, the book did not materialize on any of its updated release dates.  By 2009’s end, the much-promised and much-hyped “Forever War” never happened at all.

In the end, the culprit responsible for the second demise of “The Forever War” was Peter Laird-himself. His sale of the Teenage Mutant Ninja Turtles franchise to the Viacom Corporation in December of 2009 pulled the rug out from under “The Forever War” project, as the deal did not grant Mirage license to publish any stories not taking place within the Mirage universe (though Laird retained the right to publish up to 18 Mirage TMNT stories a year). In addition to “The Forever War”, other projects such as “The Mirage Universe Sourcebook” were unceremoniously cancelled after solicitations had been made and much of the work had been completed.

And that brings us to today. What has become of “The Forever War”? Well, Viacom has licensed the TMNT catalog to comics publisher IDW for reprint purposes as well as a license to produce all-new material. Their first new title is due out at the end of the Summer and their first reprint collection (of Mirage’s TMNT Vol. 1 material) is due in early Fall. Through their message boards, IDW editors and creators have shown in open interest in dialogues with fans, particularly in what they’d like to see in their TMNT comics. Naturally, discussion about “The Forever War” has cropped up, though IDW has no plans at the time of this writing to pursue any Archie material.

If anyone is willing to listen to fan demand and resurrect an old series from the 90s, it’s IDW.

So if you’d like to see “The Forever War”, make your voice heard in either this thread on their official message board or by contacting them directly at: letters@idwpublishing.com

Special Thanks to TMNT fan Tokka for saving so much of Murphy’s defunct "5th Turtle" blog in his Flickr photo-stream; the images AND the blog posts! It’s a relief to know that so much of that excellent behind-the-scenes information has been preserved somewhere!