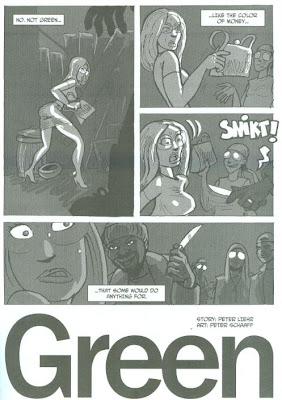 As a woman enters a blind alley late at night, she finds herself cornered by a gang of thugs. Meanwhile, a narrator considers that New York is called “the Big Apple” because it’s as tempting as the first apple… but not because it’s green. 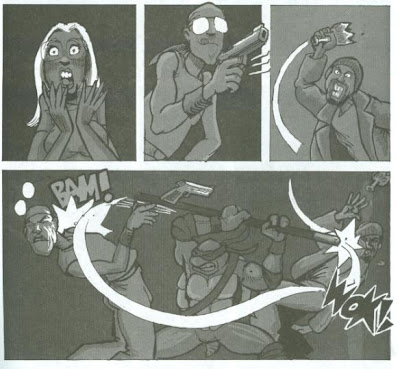 Don takes out the last of the thugs with his staff, returns the purse to the lady and disappears up a fire escape. Reuniting with his brothers on the roof, he considers that green can also be the color of one’s skin and the color of hope, too.

*Both author and artist for “Green” are natives of Germany. Schaaff has previously worked on the German version of MAD Magazine while Liehr has written for LucasFilm/Decipher.

I sometimes wonder how much of this piece was lost in the translation from German to English. I ponder this because Donatello’s inner monologue seems only semi-coherent. He starts thinking that New York isn’t “green” even though it’s called “the Big Apple” (I usually think of red when I think of apples, but I’ll concede the point). Then he goes on to list other things that are green, which New York is not like: money and… blood? I guess he means his blood? Do the TMNT bleed green?

The end result reads very sloppy; an almost stream of consciousness pile of nonsense that seems translated on the fly, or at least written by someone without the firmest grasp of the English language. It yearns to be “profound”, but is much too confused in its phrasing and message.

Schaaff, as I understand it, draws for the German version of MAD Magazine and his style used in "Green" definitely reflects that occupation. It’s certainly readable, but the anatomy looks like someone used to drawing in the abstract, squash-and-stretch MAD Magazine style trying to reign it in to typical comic book art. Not "Hedden and McWeeney" or "Mark Martin" levels of surreal craziness, but somewhere in-between that and action-adventure stuff. Your mileage may vary.

“Green” isn’t one of the better back-up strips in TMNT’s comic book history, all things considered. The adventure presented in it is entirely mundane, with the meat of the story hinging on its “profound” inner monologue. But when that profound inner monologue scarcely makes a lick of sense, the whole thing is just a bust.

Grade: D (as in, “Doesn't green stand for the color of envy? That would've been a more obvious analogy.”)
Posted by TMNT Entity at 1:01 PM