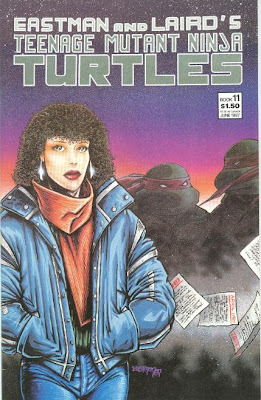 In her bed, April awakens from a nightmare where she is attacked by monstrous versions of the Foot and the Shredder. Unable to fall back asleep, she proceeds to continue writing in her journal.

April recalls the trip from New York to Northampton with Casey; her lack of enthusiasm to see the sleepy rural town or rundown farm that once belonged to Casey’s grandmother.

As winter sets in, April considers how worried she is about the Turtles. Leonardo has recovered from his injuries, but his failure in battle has wounded him psychologically. He now spends all his time in the surrounding forest, trying to hone his skills by hunting. Leonardo attempts to kill a buck, but the animal bests him at every turn. Realizing he’s not good enough, Leo gives up and lets the buck run away. Still writing, April considers how much it hurts to have lost all her worldly possessions that remind her of her family and her past. She considers that the Turtles are feeling that way, too. 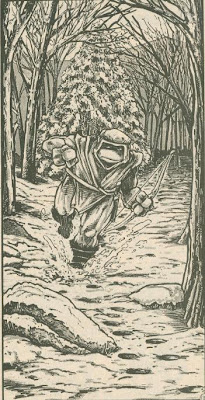 Donatello has taken to obsessively repairing the farm, creating a water-pumping windmill, a water wheel that generates electricity and an upgraded wood-burning stove to heat the house. April believes Don to have “recovered” the best of the Turtles, but he appears to take little joy in his accomplishments.

Don fixes the hot water heater! Showers for all!

April is awakened one night to hear Don in his upstairs study, furiously pecking away at a typewriter. April wonders what Don must be writing and hopes to one day find out. Inside the study, Don stands pensively at his window, the trashcan overflowing and littering the floor with crumpled up balls of paper. 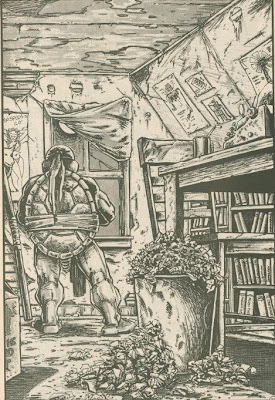 Of all the Turtles, Mike worries April the most. Once the fun-loving joker, he’s taken to solitude in the barn, practicing his martial arts. However, his “practicing” consists primarily of rage-filled destruction, as Mikey punches a hole in the side of the barn. Watching all the Turtles drift apart, April realizes that they need each other more now than ever. 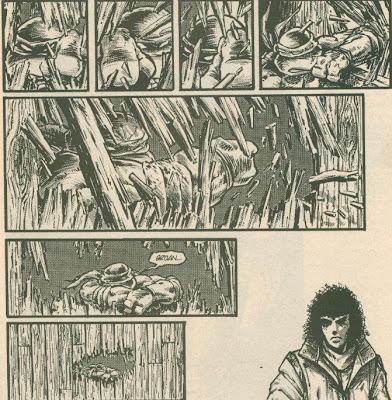 April claims that she has become frightened of Raphael and actively avoids him wherever possible. He has taken to disappearing to parts unknown for most of the day and night, with his only bit of socializing being time spent with Casey. Up on the roof of the barn, beneath a full moon, Raph actively stands guard over the farm. 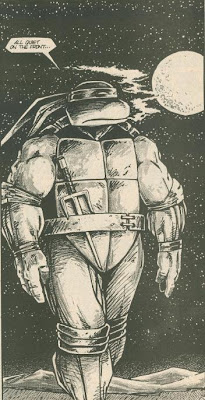 April pontificates on her frustrations with one Casey Bernid Jones. She feels that within him is a struggle between a 10 year-old and a semi-functional adult. Unfortunately, the 10 year-old is winning. In the garage, Casey and Raph trade juvenile insults as they work to get an ancient Jeep to start up. Raph, still groggy from his late night patrols, accidentally puts it in gear and sends the Jeep careening through the garage, knocking over Don’s water-pumping windmill and eventually crashing into a ditch. There was much anger.

Sometime later, April is going for a walk on a frozen pond when a patch of thin ice breaks beneath her. Leo hears her screaming and rushes to her rescue. Forgetting his inhibitions in the heat of the moment, Leo pulls her out of the water and gets her back to the farm.

As April recovers, Splinter declares that it is finally time for the Turtles to begin regaining the spirit they lost at the hands of the Foot. Taking them out into the woods, Splinter trains the Turtles harder than ever before.

Writing for the first time in months, April feels she no longer needs to keep a journal and just wants to put in the final word. Seeing the Turtles recover from their hardship, she realizes that losing her worldly possessions was ultimately meaningless, as she’ll always have her memories. More importantly, she still has her family, strange though they may be, and that they’ll always have her.

Around a campfire in the woods, Splinter tells the Turtles that he knows they feel guilt over the pain they brought on April by coming to live with her. He reminds them, though, that it was also April’s choice to invite them and their troubles into her life; though she has lost much by taking them in, she has gained far, far more.

The next morning, after a good night’s sleep, April awakens to find the Turtles in bowties, lavishing her with breakfast in bed.

*According to Kevin Eastman’s editorial, one of the reasons this issue spans so many months is so the narrative could catch up with “real time”, as the book had been beset by delays for half a year.

“True Stories” marks the end of a creative era in TMNT and the beginning of a new narrative one.

TMNT #11 will be the last “Eastman/Laird Joint” until TMNT (Vol. 1) #50, with the pair doing their classic back-and-forth on story, pencils, inks and tones. So with this, their cooperative creative streak comes to an end and the “traditional” look of the book goes away forever, as a slew of new artists, inkers and toners swoop in to fill the void. If you’ve ever wondered why most TMNT trade paperback and hardcover collections always seem to end with this issue, now you know.

From a narrative perspective, “True Stories” takes the characters away from the comfort of New York and ushers in what I like to refer to as the “Exile to Northampton” era. The Turtles will spend the next year or two recovering from their humiliating defeat and steeling themselves for the epic rematch in “Return to New York”. But to get there, we first have to go through a whole lot of standalone stories of varying weirdness.

This first chapter in the era, though, is more of a transitional piece, setting up the new status quo and getting the characters accustomed to it. Most of the psychological and emotional rebounding from their defeat occurs in this story, with the rest of the Northampton stories being one wacky adventure after the other. So “True Stories” is definitely a very “heavy” tale, dealing with a lot of baggage that the next installments opt not to carry on in exchange for lighter fun.

I’m perfectly fine with that. The journal technique allows us to cross five months of traffic to hurry up and get the Turtles back to where they need to be. I definitely prefer this method than decompressing their recovery to a dozen issues of soap opera antics; crying and hugging and crying and hugging. Incidentally, Eastman’s opening editorial reveals that the journal device was used strictly as necessity; to get the comic caught up with “real time” as delays had set it back tremendously. Well, it certainly worked out for the best, I’d say.

While there are some speech bubbles here and there, most of the text comes from prose selections from April’s journal. The selections are brief, telling us what we need to know while still sounding natural and not truncated. TMNT (Vol. 4) #22 would try a similar approach and utterly fumble it, by having such woefully dense narration that it renders the issue an absolute chore to read. TMNT (Vol. 1) #11, on the other hand, gets the mix just right.

Of the art in this issue, I think my favorite moment is pages 13 through 17; Leo’s embarrassing showdown with the buck. It illustrates nearly wordlessly just how mentally unraveled he’s become, unable to focus and “get his head in the game” enough to best even a forest animal. The best part comes on the final page, as the buck knocks Leo down, Leo sits up, the buck stands there waiting for him to do something and instead, Leo just gives up and drops his head in shame, allowing the buck to scamper off. The top two panels on page 17 say it all; you can tell that Leo realizes he just isn’t ready to protect anyone yet and that knowledge is tearing him apart inside. 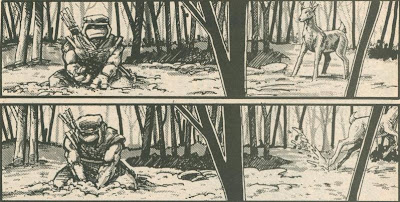 I loved the focus on April in this story, who desperately needed the character work at this point in the book. As I’ve gone on before in some of my reviews for the earliest issues, April didn’t start out as a particularly strong character and was rather loathsome in many ways. “True Stories”, being told almost exclusively from her perspective, allows her to grow and “toughen the Hell up”, as it were, transforming her from the shrinking crybaby she was at the start of the series to a more strong-willed, capable individual. Her emotions in this story also contrast sharply with her arc during the “City at War” epic, where she does almost a complete 180 from how she’s presented here. But through it all, she still remains the “normal” character, dealing with everything as a grounded “real” person would. That was always, perhaps, her strongest characteristic in Mirage’s TMNT series, even though it tended to have the unintentional side effect of making her boring or irrelevant or hard to write into epic fantasy/sci-fi/kung fu stories. If the “Exile to the Northampton” era is anything, it’s a great showcase of a time when April actually mattered in these comics.

As a “sendoff” to the original Eastman/Laird run, “True Stories” is definitely not what you’d expect. I don’t think the pair ever thought that this would be their last story together (barring the anniversary reunion for TMNT #50), and circumstances merely resulted in things being that way, but it functions as a sweet “goodbye” to their run, none the less. In this issue, Eastman and Laird get to deeply analyze each of their characters, dissecting what makes them tick and just how each of them would handle a tragedy they could never anticipate. Keeping all the text off to the side for the journal portions allows for a lot of unobstructed views of their artwork, too, making this a very strong narrative piece and artistic piece. While I’m sure it wasn’t meant to be, it’s still a great conclusion to their run.

Grade: A (as in, “Although Splinter kinda got the short end of the stick, here. Guess April didn’t really care how he was coping with things”.)