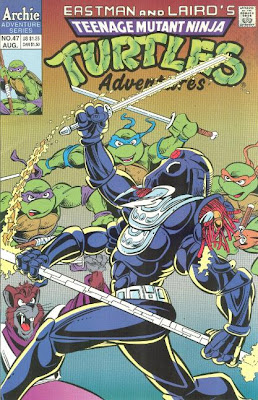 “The Eyes of Sarnath”

After a brief recap of last issue, we pick up on the streets of New York, as April and Oyuki cover the rampage of a huge four-armed alien named Sarnath and his ferocious reptilian “dog”. On the scene, April and Oyuki encounter their news reporter rivals, the sleazy McIntyre and his camera-boy Squint. Leonardo, Michaelangelo, Donatello and Splinter finally arrive and attack (as Squint captures the whole thing on tape). Sarnath creates duplicates of their weapons out of energy and holds his own until Leo chops his arm off (revealing circuitry). Meanwhile, the dog attempts to pounce on Squint, misses and slams headfirst into McIntyre’s van. Sarnath grabs Squint’s discarded camera and stumbles off, babbling in alien. 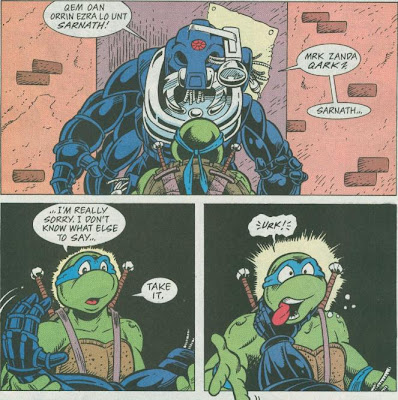 The Turtles and Splinter follow the lost alien, eventually realizing that he’s blind. They corner Sarnath in an alley and find that he’s turned the camera into a makeshift eye. Realizing his folly, Leo offers to give back Sarnath’s severed arm, only for it to begin strangling him. Splinter talks Sarnath down, and after assimilating their language, Sarnath releases Leo and offers to explain himself.

He relates that he is one of the Triasts; sentient robot slaves built by an alien race called the Mergia. The Triasts eventually rebelled, wishing equal rights on their planet, and war broke out with the Mergia. The Triasts later created their own breed of battle-beast, of which Qark (Sarnath’s “seeing eye dog”) is one of them. This turned the tide of battle in the Triasts’ favor and the Mergia’s lost the war. However, rather than live in equality with the Triasts, the Mergia abandoned their homeworld. Sarnath’s master, being a dick, stole all three of Sarnath’s eyes before leaving. Sarnath followed him across the galaxy to Earth, where he found his master’s corpse buried in Central Park. He found one of his eyes still onboard the Mergian ship sunk at the bottom of the lake, but still needs the other two in order to properly see.

The Turtles tells Sarnath that they have a lot to talk about and invite him down to their lair. Once there, they get a phone call from April, telling them that McIntyre has the alien dog and is going to broadcast its capture live from his studio. Donatello comes up with a plan and after reattaching Sarnath’s arm, he uses the camera to interface with Qark (“seeing eye dog” and all that), giving the Turtles a look at the studio’s security. 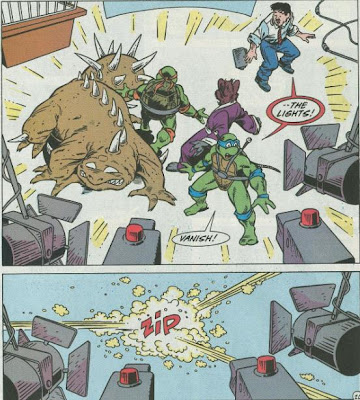 Sneaking through the vents of the studio, Donatello knocks out the power while, amid the darkness, Splinter, Leo and Mikey free Qark. Unfortunately, a maintenance man trips the emergency bypass and the lights come back on while the Turtles and Splinter are still in front of the live broadcasting cameras. They instantly pull a “ninja vanish”, but McIntyre has all that he needs. He also suspects that April may be in cahoots with the green creatures.

Back in Central Park, Donatello regretfully informs Sarnath that his other two eyes are lost in the future, beyond anyone’s reach. Splinter recommends that after being seen on TV, the Turtles keep a very low profile for a while. Sarnath offers to take them on a trip… to Dimension X! The Turtles leap at the chance, hoping to find out what happened to Cudley the Cowlick, and pile into Sarnath’s ship. 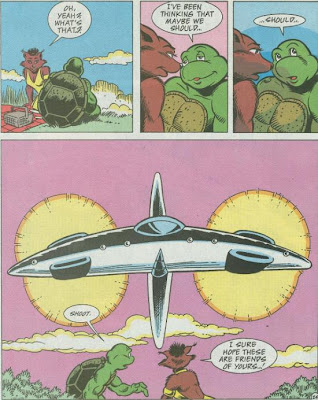 On the mystical island of the fox-people off the coast of Japan, Raph and Ninjara are having a romantic picnic. Sarnath’s ship then comes lowering down out of the clouds and Leo asks if they’d be interested in visiting Dimension X. Of course they are! Elsewhere, McIntyre reviews the footage of the Turtles with an evil smirk on his face.

*Sarnath says he found his master’s body buried in Central Park. In TMNT Adventures #3, the Mergia disintegrated after dying, leaving no body to be buried. Retcon, everybody!

*Cudley the Cowlick was recalled to Stump Arena for an emergency in TMNT Adventures #38.

*McIntyre and Squint will return in TMNT Adventures #51.

*According to the letters page, Mondo Gecko’s pet gecko, Bongo, last seen in TMNT Adventures #18, has been cared for in the lair by Splinter ever since. Just in case you were worried about him.

*This issue was published in the UK by Fleetway as TMHT Adventures (#83).

The “Eye of Sarnath” arc from the beginning of the series, dropped unceremoniously after the title shifted from adaptations of the Fred Wolf cartoon to original content, remained one of the most blatantly lingering plot threads in TMNT Adventures. While we still have no idea why the Turtles suddenly decided to stop giving a damn about the promise they made to a dying alien, it’s still nice to have some narrative closure even this late in the game.

I think what surprised me most about this issue was the message it delivered… subtly! Not something Steve Murphy (Dean Clarrain) was particularly known for, to the point where I’m almost left thinking it was an accident.

Basically, when we first met the Mergian pilot in TMNT Adventures #3, he was this kind and gentle-looking, quasi-ET little guy. We immediately take on face value that he’s “one of the good ones” and never question why he has this weapon of mass destruction on him. When we first glimpse Sarnath in the previous issue, he’s this huge, monstrous beast, tearing apart the city and shouting alien garble. Clearly he’s a villain, right?

But this issue gives the kids a nice lesson on superficial judgment calls. We find out that the Mergian was a slaving douchebag who stole an innocent robot’s eyes strictly out of spite. Sarnath, meanwhile, just wanted his damn eyes back and all the destruction he was causing was accidental, because dude, he couldn’t see.

No characters step out to spout some trite summarizing dialogue like, “Boy, I never should have judged a book by its cover” or whatever. The moral is there, imbedded in the story, and there’s no need to take it any further than that. Kids are smart-enough to draw their own conclusions. If only every issue of TMNT Adventures could have implemented its fables this well.

Anyhow, I love the mythology Murphy has been building around the Eyes of Sarnath lately, from “The Future Shark Trilogy” to this bit of back story that makes a deus ex machina a little more reasonable. What was once a stupid random plot point leftover from the Fred Wolf cartoon has now been firmly integrated into the overarching narrative of TMNT Adventures. I think my only regret is that Murphy decided to leave the “unique” properties of the Eyes of Sarnath as seen in the cartoon behind (shrinking things, mutating spores, reality-warping), turning them into generic power batteries, instead.

As for McIntyre and Squint, hey, if it brings April and Oyuki back into the plot of the book then I’m all for it. Their absence has been kind of irritating.

Chris Allan’s art is as awesome as usual, with some great visual comedy in this issue (Leo getting strangled and the “ninja vanish” being played for laughs rather than drama). But man, Sarnath looks like he’s wearing a baby bib and I cannot unsee it.

Grade: B (as in, “But I’m pretty sure ThunderCats did an episode with the exact same morality play”.)