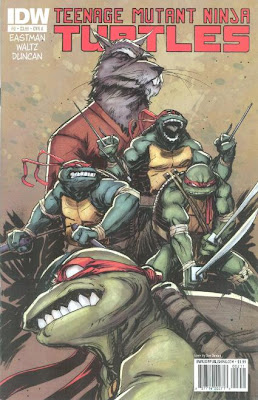 Inside the house, Raph tells the drunken father to put his son down. The belligerent dad isn’t too impressed by a giant talking turtle and decides to beat up Raph, instead. Bad move, as Raph handily throws the drunk out of his own home. Furious, the father piles into his car and drives off. Raph asks the teenage boy how he’s doing, and he rather nonchalantly shrugs the damage off. He is, however, curious as to where Raph came from. 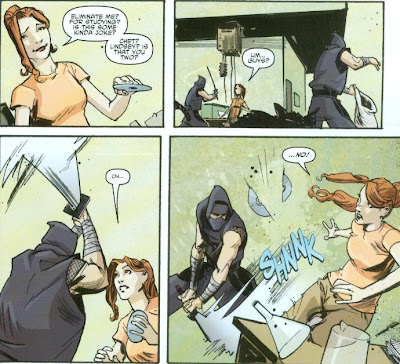 Fifteen months ago, April is spending a late night alone at the Stockgen Research Lab when suddenly the little rat, Splinter, surprises her with an envelope. Taking the envelope from Splinter’s mouth, April finds that it contains a disk labeled “terrapin/human exo-armor synthesis”. Splinter hears a sound and skitters over to the front door where he spies a pair of ninja breaking into the building. The lead ninja tells his partner to eliminate April while he retrieves “the specimens” for their master. April thinks it’s a joke at first, until the ninja tries to cut her in half (destroying the disk in the process). The other ninja begins stuffing a sack with test tubes of chemicals and the four baby turtles. Splinter finds a fire alarm and manages to trip it. The momentary distraction lets April smash a beaker over the face of one of the ninja and run to the approaching police.

Having what they came for, the ninja escape via the rooftops. Splinter gives chase and manages to attack the one with the bag of specimens, tearing at his eye. The ninja drops the bag off the roof and hurls Splinter down after it. The test tubes shatter on impact, covering the baby turtles and Splinter in a glowing green ooze. Splinter awakens to find a stray cat with one of the turtles in his mouth, trying to walk off with it. 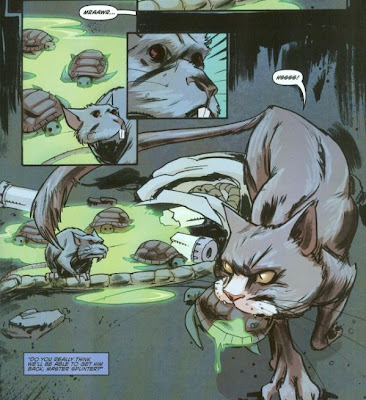 Back in the present day, Splinter, Leonardo, Donatello and Michelangelo are down in their sewer lair. Leo wonders if they’ll ever be able to find their long-lost brother, Raphael. Splinter is sure that they will, while Don thinks the odds are against them and Mike says he’d rather fight badguys like Old Hob than spend every night looking through alleys. Splinter tells them to maintain hope, as they will need to bring their family back together if they want to survive the trials and tribulations ahead. 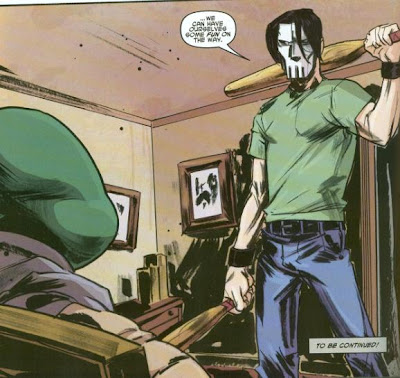 At the house, the teenager introduces himself as Casey Jones. Raph asks why he isn’t put off by his strange appearance, but Casey says that after growing up in such a tough family, it doesn’t seem like a big deal. Raph’s hungry, though, and with no food in the house, Casey suggests they go out to eat. Donning a hockey mask and equipping himself with two baseball bats Casey suggests they might have some fun along the way.

*This issue was originally published with five different covers, one by Dan Duncan, one by Walter Simonson, one by Kevin Eastman, one by Fred Hembeck and one exclusively for Jetpack Comics by Peter Laird and Brad Foster.

Second issue in and we’ve got the origin! There are some things I do and do not like about it, though again, we’re only two issues in, so things could very well play-out differently than I’m perceiving them. So I’ll give my criticisms the benefit of the doubt.

Exactly how the Turtles and Splinter became covered in mutagen; I like how that bit of drama was staged. The ninja (presumably Foot) trying to steal them from Stockgen Labs, Splinter to the rescue, ditching the evidence and smashing the ooze over them by mistake… it’s all much tighter than the original origin which, classic as it was, relied on a string of coincidences. Taking all the disparate elements of the TMNT mythos and bunching them together to create a tighter bond between them all makes for a much more cohesive universe, as opposed to, “an Utrom trucker happens to be distracted by a young Daredevil and happens to spill some ooze down a manhole where some baby turtles happened to have landed and a rat who happens to have once been owned by a ninja master happens to find them and then sometime later they happen to stumble across a mad scientist with a bunch of robots". One of the nice things about doing an “Ultimate” style retelling of an established universe as opposed to creating one from scratch is that instead of coming up with mainstay ideas piecemeal over several years, you get to gather them all up and knit them together from the beginning to avoid so much melodramatic happenstance.

But I think that trying to include April in the mix might have been a step too far; introducing a necessary ingredient a bit too early for the recipe. I recognize the positive qualities of this approach; seeing April naming the Turtles and developing an owner/pet relationship with them (and a begrudging respect for the icky rat, Splinter) solidifies a deeper connection between them and makes her even more of the “den mother” character than ever before. On the other hand, though, if you want to keep April young then you have to reduce the time the Turtles spent mutating/growing-up. Now, we only have a fifteen month time period for the Turtles to mutate into anthropomorphs, become ninjutsu masters, build their sewer lair and develop their modern, semi-human personality traits and quirks.

Some of the groundwork was already established, yes. Splinter, with his genetically advanced intellect, was already looking over the baby turtles in a fatherly way, and in the first issue April showed us that even as mindless terrapins, the Turtles each had their unique personalities. But that still only leaves little more than a year for things like Mikey to become a humor-filled pizza-lover or Don to become adept at all things mechanical. The “super-soldier” mutagen Stockman described in the first issue almost seems like a cheat; a means to immediately give them their martial arts prowess instead of subjecting them to a lifetime of training at Splinter’s hands.

The family/student relationship between the Turtles and Splinter is still there, sure, but when diluted down to only fifteen months, it feels kind of shallow.

Of course, I’ll repeat my initial disclaimer: This is only the second issue. There could be a twist coming up that’ll completely invalidate my criticisms. So I’ll keep reading with an open mind; I’m not out to condemn anything.

If there’s one thing I really liked about this issue it’s that they made Casey a teenager. In the Mirage series, it often seemed like Eastman and Laird forgot that the Teenage Mutant Ninja Turtles were supposed to be teenagers. They hung out exclusively with adults and rarely acted like the fifteen-to-sixteen year-olds that they canonically were. When we meet Casey Jones in the Mirage series, he has to at least be 21 (he says he used to work as a bouncer at a bar). A 15 year-old hanging out with a 21 year-old? Creepy stuff.

Even the 4kids animated series seemed to have that problem, trying to avoid it by making April and Casey nebulous ages, but they were still inarguably adults. Making Casey a teenager to put him at the same age as his best friends is a change I wholly approve of. I wasn’t so hot on the idea that Casey would just stand there and let his dad beat the shit out of him, but with the issue ending with Casey decked-out in his vigilante gear, I don’t think I have to worry about Casey being a wuss in this new series.

As for Dan Duncan’s art, I think this issue was a better display of his talent at expressions than the previous one. April looks especially cute, as she goes from “grossed out by rat slobber” to “confused by strange disk” to “thinks the ninjas look silly” to “holy shit, I’m gonna die” between five or six pages. In an industry filled with guys like Greg land, it’s a relief to have an artist who knows how to make characters emote properly in response to the situations. I wasn’t so thrilled with the Turtles having pupil-less eyes without their bandanas after reading the first issue, but they’re growing on me. In the end, what difference does it make if they have that strip of colored fabric across their faces or not?

There’s still plenty of mystery from Waltz and Eastman to keep us enticed. Were those the Foot? Will we see that ninja that got scratched by Splinter again? Who is the “master” they spoke of? At a guess I’d say Shredder, but who knows? If there’s one thing I’ve learned after two issues of this series, it’s that Waltz and co. are trying to keep things familiar while doing away with the expected.

Grade: B- (as in, “But either that ninja and Old Hob are related, or Splinter just really likes to tear people’s eyes out”.)
Posted by TMNT Entity at 2:24 PM