April O'Neil: The May East Saga #1 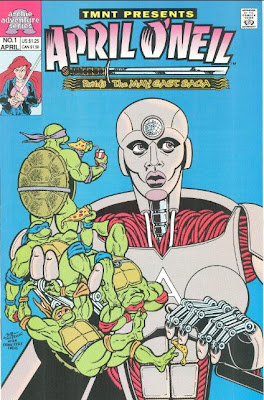 “Lost Island of Past Lives”

While delivering a news report on a top secret, uncharted island now revealed to the public following the end of the Cold War, April becomes entranced on air and mumbles the word “Maiest”. Watching from the lair, Splinter recognizes the word as being one of ancient power and senses April might be in danger.

Traveling across the ocean via hovercraft, April isn’t thrilled that the Turtles and Splinter “just happened” barge in on her as she was leaving on her vacation to the mysterious island and “insisted” they come along. April is acting very short with all of them, though Splinter suspects there’s more to her behavior than a nasty temper. Arriving on the island, Splinter tells the Turtles to give April the privacy she demands (while he secretly follows her). 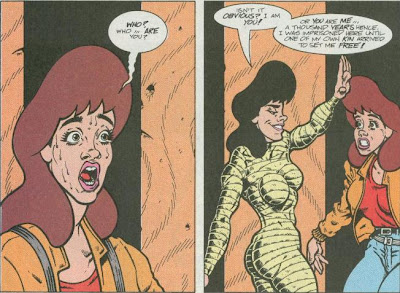 April traverses the jungle and is drawn to an ancient Oriental temple. Entering, she awakens a mummified, dark-haired doppelganger of herself; an evil sorceress from the past who also happens to be April’s ancestor. She’s been waiting for April to wake her up for centuries and, knocking April out, hooks her up to a brain-drain machine that will fill her in on all of Earth’s knowledge since her entombment. Splinter then bursts in and tries to stall the sorceress, who happens to be his equal in martial arts. The Turtles then barge in and the sorceress (introducing herself as May East) gulps down a magic potion, transforming herself into a giant robot. 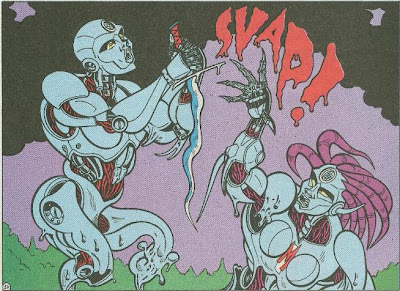 As the Turtles leap onto her and accomplish nothing, April awakens. Splinter tells her that, as May East’s descendant, only she can take the risk necessary to defeat the witch. April gulps down the magic potion and also transforms into a giant robot. The two robots do battle until the potion wears off and they melt.

After April comes to, restored to normal, the Turtles follow May East’s tracks back to her temple. They find the vaulted door sealed tight and Splinter tells them not to worry, as her menace is no longer a threat. 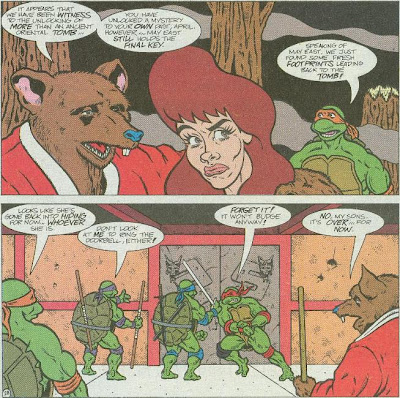 Back on the hovercraft, April considers what she’s learned about her heritage and that she may have been predestined to meet the Turtles and join in on their insane adventures.

*The story continues in April O'Neil: The May East Saga #2.

*Chronologically, I would place this story between TMNT Adventures #25 and TMNT Adventures #26. The reason for this is that the lack of Ninjara being present forces it to take place earlier in the timeline than when published. Conceivably, it could take place during just about any gap in the narrative from before the "Midnight Sun" arc, but this seemed as good a place as any.

*When originally written, this story was intended as canon; May East even received an article in TMNT Mutant Universe Sourcebook #2. However, its events were retconned into nothing more than a nightmare April had in "The Fifth Turtle".

*In a similar jab at this terrible, terrible story, TMNT Adventures #58 featured Michealangelo cleaning up garbage in the sewer and among the many articles of trash he’s crumpling up and throwing away is a copy of “The May East Saga”.

Wow, what a terrible comic “The May East Saga” is on every front.

The first “April O’Neil” miniseries by Steve Sullivan and Chris Allan was an excellent story that set April up as her own independent character with her own supporting cast, her own motivations and her own potential solo storylines. If anything, it seemed like a great start to what could have either been a regular series of follow-up minis or even her own solo title.

Then “The May East Saga” came along and fucked everything up, flushing all the potential the previous mini had earned right down the toilet.

Wiater decides to embrace the wackier, more surreal side of the Turtle universe, which isn’t inherently a bad thing, except that the story is amateurishly paced and full of inconsistencies. May East makes it clear that only she has the power to awaken April after hooking her up to that stupid brain-drain device. Yet, after she turns into a giant robot, that plot point vanishes and Splinter wakes April up as if she’d been taking a nap. And don’t try to figure out how the Turtles travelled from New York to an island in the Orient entirely by hovercraft (and don’t bother asking where they got the hovercraft, either).

But even worse than Wiater’s script, the real killer is Bob Fingerman’s grotesque artwork. The Turtles look horrifically deformed; possibly the ugliest we’ve seen them since the issues drawn by Don Simpson. Uglier than that, though, is April-herself; who looks like she’s pushing middle age or older. And it’s not just all the inexplicable wrinkles decking her face, either. She’s suddenly got this huge, bulbous nose, bushy eyebrows and Mick Jager lips. And she couldn’t be rocking more mascara if she tried.

The art-style is just positively repulsive.

There’s a fine line between “weird” and “stupid” and it’s a difficult one to tread. “The May East Saga” doesn’t even come close to treading it, though, and is just flat-out stupid to read and hideous to look at. And we’ve still got two more issues to go.

Grade: F (as in, “For a moment I was going to question how a sorceress who predates the alphabet can have an ‘M’ on her robot’s chest, but then I remembered she predates robots, too, so why even bother asking”.)