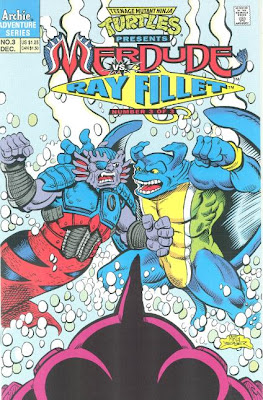 On the ocean floor, Ray Fillet is battering the Hell out of a confused Merdude, screaming his murderous intent. 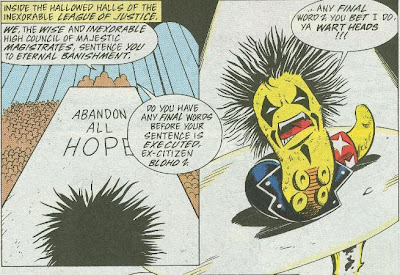 But the story actually starts 24 hours ago, on the distant planet Granite (in the Bizzy Galaxy). The League of Justice, operating out of the city Sinom, has condemned Bloho the Main-Worm to eternal banishment for his crimes against ass Tsarnians. Bloho swears vengeance as he is teleported to parts unknown. At the same time, on Earth, Armaggon plots his destruction of the Mutanimals and all teenage mutants.

At the volcano island HQ of the Mutanimals, the team prepares to get to work finishing up the interior. Mondo Gecko asks where Ray Fillet has gone and Leatherhead explains that he’s shooting the breeze with Merdude.

In the undersea castle of Merdude, he and Ray Fillet are discussing marine biology and other boring crap. Merdude feels compelled to tell Ray his origin and here it is: 5,000 years ago, Merdude was a boy named Alim who lived in an island village. His father was a great fisherman whom he wanted to emulate. One day, while secretly taking a boat out to see, a strange flying saucer came wizzing by and dumped a cylinder in the water, turning the sea green and bubbly. Just then, Alim caught a giant coelacanth that landed right on him, tipping his small boat. Alim and the prehistoric fish fell into the poisoned water and Alim found himself transforming into a fish-man.

Ray explains that Merdude may very well be the first Earthling to ever be affected by alien mutagen. But more importantly, the news that Alim is 5,000 years old means that Ray and all others affected by mutagen may live just as long.

Outside the castle, Bloho materializes. Looking for some action, he decides to possess Ray and do some damage. Latching onto the back of Ray’s neck, Bloho seizes control of his body and begins attacking Merdude. The two take their battle outside, where Armaggon secretly watches, waiting to see if they kill each other and save him the trouble. 12 hours later, Bloho defeats Merdude with a cheap shot. Armaggon chooses that as the best time to strike and punches Ray in the back of the neck, inadvertently rendering Bloho unconscious and detaching him. Bloho then sinks down a deep crevasse, where he lands on the neck of the comatose Naughtikus. 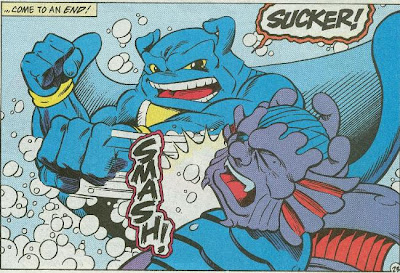 Ray comes to and defends himself against Armaggon. Having witnessed the whole thing, Merdude realizes Ray was under Bloho’s control and comes to his friend’s aid. By accident, Merdude damages Armaggon’s portable timeslip generator, causing the shark to vanish into time and space. Back at the castle, Ray tries to apologize for the whole ordeal, but Merdude tells him to think nothing of it (though he could use help repairing his damaged home).

Elsewhere, in some weird galaxy, Armaggon floats around helplessly, pouting to himself.

*This story is continued from Merdude and Mondo Gecko #2.

*Merdude’s real name previously had been “Jacques”, conflicting with his real name given in the Fred Wolf cartoon, “Alim”. Dan Berger patches that inconsistency up, by revealing that Merdude’s current real name is Jacques while his real-real name is Alim.

*I get the feeling this was originally supposed to be titled “Merdude vs. Man Ray” to keep the alliteration of the previous titles going, but was changed to “Ray Fillet” as that was the character’s merchandising name. Just a hunch.

*This issue also featured a bonus pin-up of Armaggon by Matt Roach and Ryan Brown.

So the surprise miniseries of 1993 comes to a conclusion! “Surprise” to me, anyway, as I hadn’t expected a mini about someone like Merdude to be so good or so intertwined with the ongoing narratives of TMNT Adventures and Mighty Mutanimals.

Of the three issues, though, I feel that this one was probably the weakest, hinging primarily on an already dated parody of a DC comics character and a single fight scene between two aquatic mutants. Armaggon, who was seemingly being built up as the major antagonist of this story, winds up having his threat fall completely flat, appearing for only a few panels and not accomplishing any competent villainy. I get the feeling Berger was writing him for laughs, which is fine, but it’s kind of disappointing to see a major villain from TMNT Adventures get reduced to comedy relief status by his second story arc.

I liked Merdude’s origin and I appreciated Berger’s efforts to harmonize his conflicting “real names” between the cartoon and the comic. And eliminating the vague references to “Atlantis” (Merdude and Eowithe were shown speaking Atlantean in the previous issue) clears up any incongruities with how Atlantis was portrayed in the "Donatello and Leatherhead" miniseries. Unfortunately, Merdude’s wholly unique origin as a creature of mutagen instead of a “natural” mutant makes characters of similar appearance, like King Fish, hard to rationalize. Before, I simply thought he was of the same race as Merdude (despite Merdude claiming he was the last member of his own race in his first appearance). But apparently, by “race”, he meant “tribe of ancient human villagers”, so how the heck King Fish fits into that I can’t say. Likewise, I presumed Eowithe and the other Mermaids to simply be females from Merdude’s mer-race, but that’s not the case, either.

There just seem to be a lot of unrelated flipper-people paddling around the ocean in TMNT Adventures.

Still, if you’re fans of both aquatic mutants, and you’ve always wanted to see them duke it out, then you’ll probably get more out of this story than I did. The fight goes on for several pages, including a two-page spread, and Michael Gaydos’s art is very good. I definitely wish the guy had produced more work for TMNT Adventures. Unfortunately, by 1993, the title was declining in popularity and the only other miniseries produced after this one was the finale “Year of the Turtles”.

While Armaggon’s menace takes an embarrassing downward spiral and Merdude’s origin creates more inconsistencies than it fixes, Berger’s ever-present sense of humor and Gaydos’s exciting art makes it all work out in the end. The Merdude miniseries sets up big things for the Mutanimals that never materialize, alas, but it’s fun to see what “could have been” had Steve Murphy (Dean Clarrain) not been so hot on slaughtering them all the moment the TV deal fell through (in fact, this issue was published at the same time as the “Megadeath” arc that saw all the Mutanimals killed).

If you’re only looking for the bare essentials of TMNT Adventures, I’d say that this is a necessary read.

Grade: B- (as in, “But c’mon, Keith Giffen’s Lobo miniseries was pretty awesome, back in the day”.)