April O'Neil: The May East Saga #3 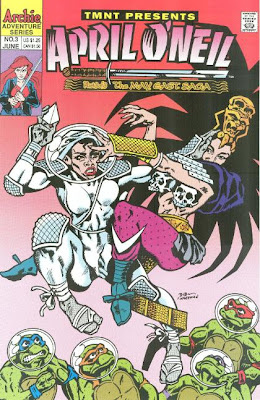 Journeying toward Splinter’s brain, April uses her mystical powers in conjunction with the magic crystal to create air bubbles around hers and the Turtles’ heads. However, at their size, the brain is a large place. Luckily, every time May East speaks through Splinter’s body (arguing with Bookwurm), it leads April toward her. 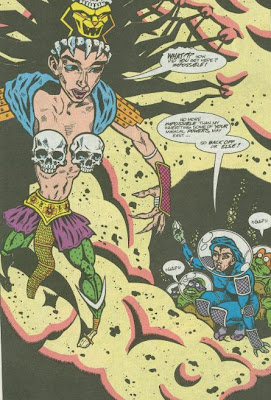 Eventually, April and the Turtles find their way to May East, who is ready for them. Using her hair like tentacles, she seizes the Turtles and begins to strangle them. They can’t free themselves; only a serious vibration could save the day. Luckily, Bookwurm blows some dust off the cover of a book into Splinter’s face, causing him to sneeze. 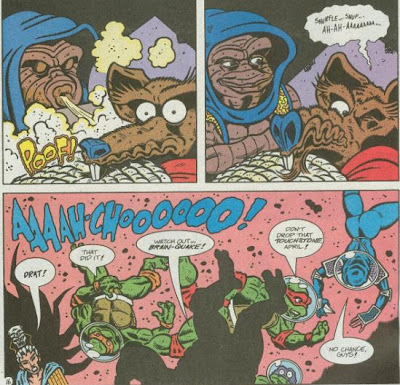 The sneeze loosens May East’s grip on the Turtles and Splinter’s brain. Suddenly, both April and May East feel themselves beginning to enlarge. May East makes a break for it, only to be attacked by Splinter’s white blood cells. Reluctantly, April agrees to work with May East to protect herself and the Turtles from the blood cells by sharing the magic crystal and creating a forcefield. Unfortunately, by splitting the power of the crystal, they weaken its power. The only way they’ll make it out in time is for April to give May East the crystal completely. On the condition of “no funny business”, April hands the bauble over and all six of them escape Splinter’s body just in time. 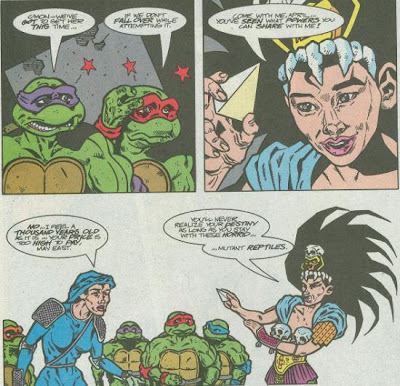 Back to normal size, May East offers April the opportunity to join her in conquering the world. April declines, as she isn’t willing to pay such a terrible price. May East then disappears and the Turtles figure they haven’t seen the last of her. Bookwurm laments that she’s taking so many secrets of the ancient and mystical world with her as she leaves. April consoles him, saying that it’s better to face an ugly truth than a beautiful lie (what the fuck kind of non-sequitur is that?).

Later, at her office, April finishes up her journal, deciding that she is precisely where she needs to be in life. She swears by her ancestors, all of them, that she’ll use her knowledge to help her friends whenever they need it.

*This story is continued from April O’Neil: The May East Saga #2. "It Takes Guts..." takes place shortly after this story.

*Again, the events of the entire “May East Saga” miniseries were retroactively rendered non-canon by "The Fifth Turtle".

After improving ever so little with the previous issue (thanks to presumably a different inker/clean-up artist), Bob Fingerman’s artwork completely self destructs once again; falling back to the same levels of ugliness seen in the first issue of “The May East Saga”. This time, though, the repulsiveness stems equally from the absurdly heavy inking. No inker is listed in the credits and I can see why they’d want to remain anonymous; the characters have so many dark lines and hard shadows and deep-sewn wrinkles that you’d think you were reading a zombie comic.

I mean, if you want a shorthand example of just how awful and grotesque Fingerman’s artwork is, just take a look at that cover. Compare Chris Allan’s April in the top left corner box with the hideous baboon-faced monstrosity just below her. They’re supposed to be the same character.

Wiater’s writing continues to be sub-professional and it’s hard to believe this was the same guy who wrote the decent “Donatello & Leatherhead” miniseries. That mini may not have been superb, but at least it was competent. There are long, drawn-out moments in this issue that amount to positively nothing, such as Bookwurm having an extended discussion with the possessed Splinter about finding a roadmap to the rat’s brain. He eventually produces a book with an anatomical schematic of a rat’s brain and it is presented as a major plot point. It is immediately discarded, though, as April simply finds May East by following the sound of her voice. I can’t think of a comic I’ve read with writing this sloppy.

And more-so than just the “small stuff”, if you take the entire “May East Saga” miniseries and break it down into a diagram of its plot and progression, just what the Hell was the whole point of it all? What did it accomplish and what direction was it trying to take? Because if you ask me, the thing had no direction whatsoever.

April unearths her ancestor in the first issue and they turn into giant robots for some reason. Then her ancestor returns, possesses Splinter to steal his “knowledge”, gets kicked out when her spell wears off and then escapes to be dealt with another day. We never get an idea of who or what May East really is and how her blood connects to April. We never get to see any of her grand world-conquering schemes outside of sucking knowledge from a rat by shrinking herself and entering its brain. The entire storytelling structure is just fundamentally incompetent. Wiater must have been friends with someone at Archie or Mirage to get this published (likewise, Fingerman must have had some cronies to get paid for art this bad).

The retcon that “The May East Saga” was nothing but a nightmare actually works not just in the favor of the overall TMNT Adventures narrative (by purging it of this cancerous storyarc), but it actually benefits the reader's perception of this miniseries, too. As an action-adventure story intended to be taken at face value, “The May East Saga” is garbage for all the reasons stated above. However, as a surreal nightmare, you suddenly have an explanation for the ghoulish artwork, random plot points, meaningless asides, narrative inconsistencies and stream-of-consciousness pacing. This thing really does look and feel like a bad dream.

Grade: F (as in, “For pity’s sake, this may just beat out the Conservation Corps crossover as the ultimate low-point of TMNT Adventures”.)