Teen Techno Turtle Trio Plus One! 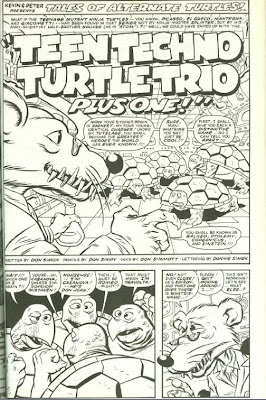 “Teen Techno Turtle Trio Plus One!”

It’s a tale of the Alternate Turtles! WHAT IF Splinter’s mad scientist brother, Splicer, had created his own quartet of fighting turtle mutants? Why, they’d be the Teen Techno Turtle Trio Plus One, of course. After creating his Turtles and giving them all complicated Italian names, Splicer finds that not only can he not tell them apart, but they can’t tell themselves apart, either.

So Splicer decides to give them all color-coded costumes (and a new set of weird names). Sadly, this is a black and white comic book, so that doesn’t help in the slightest. Splicer’s next attempt to tell them apart involves giving them all unique deadly weapons (and new names, again): a flamethrower, a missile launcher, a power saw and a ghetto blaster. But then they all start trading their weapons and accessories and Splicer just gives up.

To hone their skills, Splicer takes them to a lost world known as Dinosaur Peninsula. If they survive, they will be battle-hardened heroes. Exploring the island, the Madonna album blaring from the ghetto blaster attracts bunches of dinosaurs. The Turtles consider fighting back, but really can’t be bothered and are cool with being eaten. Suddenly, they’re rescued by Pteranoman and the Cave Babes, who scold them for bringing modern weapons to a clearly designated “no science allowed” peninsula. 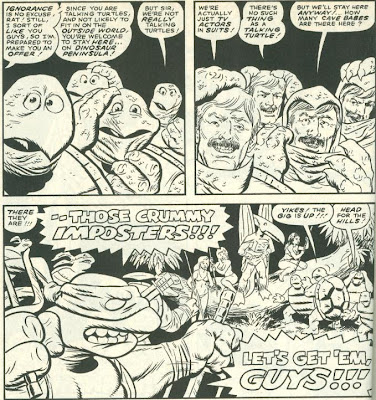 Splicer shows up to apologize, but Pteranoman forgives them and offers the Turtles the opportunity to live in harmony on Dinosaur Peninsula, as they would never fit in on the outside world. As it turns out, though, the four identical Turtles are really four identical actors in lousy costumes, but they agree to stay anyway so long as the Cave Babe supply holds out. Then, out of nowhere, the Teenage Mutant Ninja Turtles arrive! They intend to beat the snot out of the four actors before they can sign a television cartoon deal and ruin their credibility as gritty indie comics characters.

As the Ninja Turtles chase the actors away, Splicer meets up with his brother, Splinter. Splicer asks Splinter how he tells his Turtles apart. Splinter reveals that he hasn’t a clue which Turtle is which; he just calls out a name and sees which one answers. Splicer offers to give Splinter a ride home, but Splinter declines; they’re only on a peninsula, after all.

*Simpson will produce another story starring his version of the TMNT: "Tales of Alternate Turtles on the Moon!"

*All those names in the credits are goofy pseudonyms for Don Simpson. The characters of Pteranoman and the Cave Babes are owned by Simpson.

*Simpson has made this story, along with annotations, available for viewing on his website.

You know why I hate a lot of the whacky, non-canon, uber-surreal guest comics in TMNT? Because they aren’t funny. “Teen Techno Turtle Trio Plus One”, though? Now this 9-page strip is pretty damn funny.

Don Simpson, creator of Mega-Ton Man and occasional fill-in artist on TMNT Adventures, absolutely lambasts the Ninja Turtles as a concept and a media juggernaut, but never maliciously; always in a loving “nudge nudge” sort of way.

Simpson jabs the brand from their identical appearances right to their credibility-destroying children’s cartoon show. The comic timing and execution of the dialogue is fluid and perfect and the strip never feels like it’s trying too hard to be funny or weird. Contrast this with anything done by Mark Martin or Hedden and McWeeney, which are the definition of “trying way too fucking hard”. The humor flows naturally from the stupidity at the heart of the TMNT franchise and lasts only long enough for the jokes to run dry.

I’m afraid I’m not an expert on Don Simpson, though I know he was a very influential part of the 80s indie comics movement and his characters are still popular today. I don’t know if Pteranoman and the Cave Babes ever appeared in anything else, but he apparently had them trademarked if the legal note on the last page is to be believed. Simpson’s style fits this type of comedy relief comic more comfortably than it did his stint on TMNT Adventures, where he tried to adapt it to a more serious action-adventure tone and the “ugly” Turtle designs were simply too incongruous with the design aesthetic of the series. Here, though, it fits like a glove and some of the strongest humor comes in his expressions (the squinting, confused Splicer on page 1 is a favorite).

“Teen Techno Turtle Trio Plus One” is only available in the “Shell Shock” trade paperback collection, which is a smart buy for anyone interested in a large selection of rare and weird short TMNT strips. It’s definitely the funniest story in the whole book, which had a lot of lousy comedy installments.

Grade: A (as in, “And let’s be honest; a nunchaku or a sword have nothing on the deadly power of a Madonna album”.)
Posted by TMNT Entity at 5:33 PM