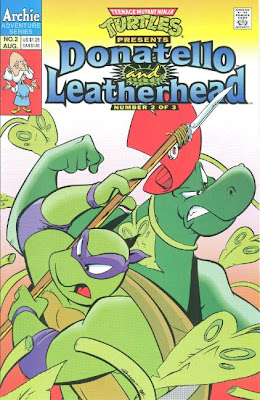 After Leatherhead “reminds” Donatello of everything that just happened a minute ago in excruciating, 3-page detail, the pair of mutants hurry into the Forbidden Cave after the purloined Emur. They stumble into a land populated by dinosaurs and see Emur being eyed by a gorgosaurus. Grabbing Emur, they evade the carnivore by running into a tar pit. As they navigate their way through the pit, Emur explains that there are worlds within worlds down in the Hollow Earth, and the one they’re in may not even be the strangest. 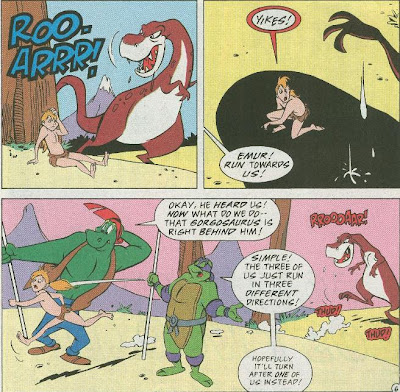 Escaping the tar pit, they’re immediately besieged by a herd of triceratops. Using hanging vines to swing over the stampede, they land in a swamp. Emur is immediately attacked by a man-eating plant, but Don and Leatherhead make short work of the flora. Following the scent of salt in the air, they find their way to a beach. Briefly, they glimpse Murtal’s spacecraft flying over the sea. Deciding to follow it, they get down to constructing a raft. While working, Don deduces that a day in the Hollow Earth for them is equal to several weeks on the surface, as time moves at a crawl down there. Even stranger, the deeper into the Hollow Earth they go, the slower time gets (they even become less hungry and thirsty). That means if they linger in the Hollow Earth to long, they may end up outliving all their friends on the surface! 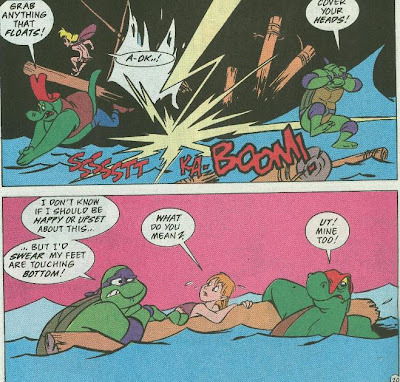 Shoving off, "Captain" Leatherhead navigates them across the sea… right into a lightning storm that destroys their raft. Luckily, an archeleon (a giant prehistoric turtle), sensing a connection with Don, gives them a lift on the back of its shell. A phobosuchus (a giant prehistoric alligator) attacks, but Leatherhead uses his own connection with the beast to convince it to split. 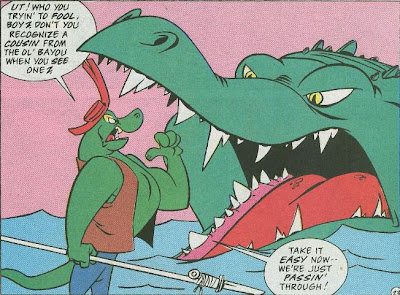 Arriving at the other side of the sea, they bid the archeleon fairwell, only for Leatherhead to be plucked up by a pteranodon. Watching helplessly as the winged creature makes off with their friend, Don and Emur discover troubles of their own. A unit of Amazons orders them to surrender or be attacked as they flutter down on winged horses.

*Donatello previously encountered a “lost world” of dinosaurs living on a hidden plateau in Brazil in TMNT Adventures #15.

The Donatello and Leatherhead miniseries continues to limp along as I come to terms with the fact that this is a children’s comic and it’s just meant to be twenty-eight pages of colorful fun.

While this issue doesn’t really offer a whole lot of anything to advance the story, being nothing more than a rapid string of predicaments for the protagonists to randomly overcome, I’m pretty sure that if I’d owned this book at age 6, I’d have loved it. I mean, dude, dinosaurs. There’s no easier way to win a kid over.

If there’s anything I appreciate about this and the last issue, I think it’s that there’s no ulterior political or environmental motive. It’s just a fun adventure where familiar characters fight dinosaurs and it doesn’t try to shame all of humanity or teach kids why Big Oil is the devil incarnate. And in a book as overwhelmingly preachy as TMNT Adventures, more stories like this are definitely necessary.

That doesn’t change the fact that the characters are still pretty boring. Donatello and Leatherhead could have just as easily been Leonardo and Mondo Gecko or Michaelangelo and Jagwar. While Donatello’s intellect and Leatherhead’s down-to-earth sensibilities come into play at times, they have little effect on the plot or the resolutions to the challenges the characters face. Though I did get a smile out of the scene where Leatherhead notices a stampede of “wild triceratops” and Donatello asks him if he’s ever met any “domesticated triceratops” before.

Garrett Ho’s art is still the real selling point of this mini, as he breaths a lot of energetic life into what would otherwise be a ho-hum adventure. He adds his exaggerated facial expressions and squash-stretch anatomy to all the dinosaurs, too, giving even the mindless beasts the extra splash of personality needed to make this a lot of fun to look at. I really like his design for Emur; he looks like he stepped out of a 1980s Disney flick, like “The Black Cauldron” or “The Little Mermaid” or something. I imagine if “The Jungle Book” had been made in 1987, he’s what Mowgli would have looked like.

Though I still don’t think Wiater is getting all he can out of the characters, I think I was a little harsh in my assessment of the first issue. If you found these issues in the quarter bin and gave them to some kids, I’m sure they’d love them. And that’s the real test of quality for a book like this, after all.

Grade: C+ (as in, “Could have gone with a better cover, though. That plant battle lasted a page”.)