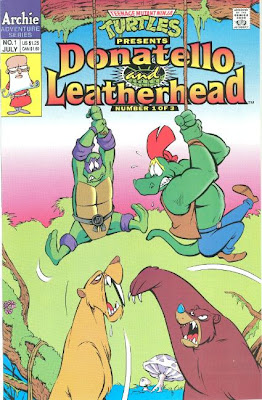 “Hassel in the Hollow Earth!”

In a junkyard in New York City, Leatherhead is helping Donatello build his latest creations: a pair of collapsible, nigh-indestructible bo staffs. The mutants start to have a sparring match, but it's interrupted by a strange spaceship. A voice commands them to enter and, seemingly against their will, they step inside the craft. They are greeted by three grumpy-looking old midgets, the leader of which (Murtal) says he has heard of their heroic deeds and needs their aid in saving the Hollow Earth. Before Don or Leatherhead can contemplate refusal, the craft rises into orbit, zips around the planet to a volcano hidden in mist. It plunges down the volcano to the interior of the planet, where a lush jungle awaits. Murtal then kicks Don and Leatherhead out of the ship so they can get to work. 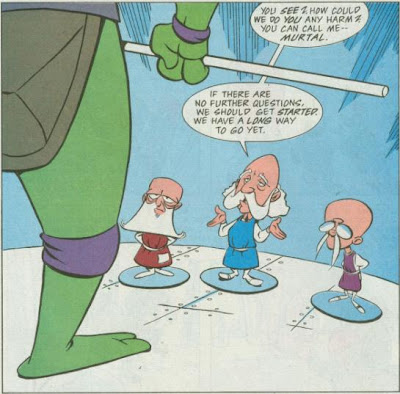 Not too enthused about their recruitment, Don and Leatherhead begin pondering a means of escaping the Hollow Earth when they are attacked by an old man named Nakka and his squad of brutes (all wearing garb from different eras of human civilization). The mutants are overpowered by nets and Nakka, thinking them demons, orders them to be dragged back to the village via woolly mammoth. 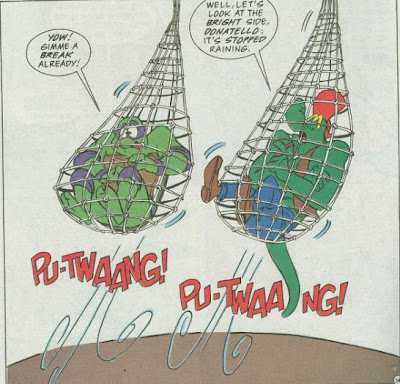 At the village, an old hag named Virkalas orders the "demons" be sacrificed and Don and Leatherhead are loaded into a cage. Sitting around, they notice that the “sun” illuminating the Hollow Earth is pink and never sets, almost making time stand still. They are then greeted by a little boy named Emur who passes them knives, hoping to help them escape. He says that the Hollow Earth is a land called Tayklo and that those who live there are immortal. He was once a surface dweller who was abducted by a strange ship in 1920 and has been trapped in Tayklo ever since. He wants to escape with them, but when Nakka and Virkalas spot him, they order Emur to be sacrificed, too. 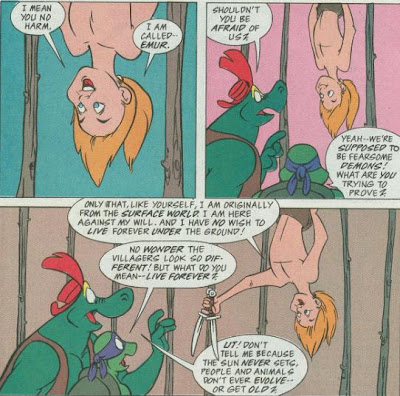 Don, Leatherhead and Emur are then suspended over a pit full of carnivorous beasts by slowly-tearing straps. Emur explains that in the pit is a place called the Forbidden Cave which all the villagers fear. They routinely sacrifice people and “demons” to keep whatever dwells in the cave happy. Using some ninja gymnastics, Don manages to free himself and Leatherhead from their bindings. Unfortunately, he doesn’t reach Emur in time, who falls into the pit and lands on the back of a woolly rhinoceros. The rhino, frightened, stampedes into the Forbidden Cave with Emur in tow. Don and Leatherhead, attaching their knives to their collapsible bo staffs to create spears, go chasing in after him.

*The Turtles last met the Mutanimals in TMNT Adventures #40.

*During his trip to the future, Donatello’s older self was shown using a collapsible bo staff in TMNT Adventures #43.

*Apparently, Don no longer cares for the ancient bo staff given to him by the Coipacu tribe in TMNT Adventures #15, which he’d been using ever since.

It’s the team-up YOU demanded! Donatello and Leatherhead!

It always seemed sort of random what characters got these miniseries from Archie. I mean, Merdude? Really? And I’ll never understand why it was determined that Donatello and Leatherhead needed to have their own rascally hijinks covering a three-part story, but hey, here we are.

Donatello and Leatherhead #1 is definitely abrupt to begin and, aside from giving the origin of Don’s collapsible bo staff seen in “The Future Shark Trilogy”, doesn’t really serve a whole lot of narrative purpose (making it easily skippable in read-throughs). However, like the Merdude miniseries, it gives one or some of the Mighty Mutanimals, mulling around since the cancellation of their ongoing, something to do before getting killed-off in the “Megadeath” storyline which is just around the corner in TMNT Adventures.

Why author Stanley Wiater (whose name I hate because I’m constantly having to battle Word’s spell-check, which demands it should be “waiter”) felt that Don and Leatherhead needed to be paired together for a story, I’m honestly at a loss. There isn’t any overt “odd couple” attributes to their relationship, at least none that would make their dynamic even the slightest bit interesting. They’re just good buddies who agree about everything and always get along. It’s kind of… dull.

Leatherhead, especially, has been neutered into such a boring character by this point in TMNT Adventures. The edge he had when he first appeared is long gone and now he’s just sort of… there. And he hardly seems Cajun anymore; just saying “ut” all the time as his verbal tick. There’s no personality to him at all.

The whole Hollow Earth thing amuses me, if only because I just watched an episode of that bullshit show on the History Channel, “Ancient Aliens”, where some lunatic with bad hair was going on and on about how the Hollow Earth theory is true and that aliens abducted some pilot from the 30s and sucked him down through a giant whole in the Arctic Circle where he found a prehistoric civilization not unlike the Savage Land from Marvel Comics. This was presented as absolute fact. On the History Channel.

If it weren’t for the Ponies, I’d have my cable cut off.

Anyway, the Hollow Earth theory at least fits in with the zany universe of TMNT Adventures, which in addition to conquering aliens from another galaxy, has already shown us dinosaurs living on a plateau in Brazil and Mermen living in Atlantean cities at the bottom of the ocean. Par for the course, so far as TMNT Adventures goes.

What makes a rather uninspired storyline pop, however, is the artwork from Garrett Ho. When Ho first began drawing on and off on Archie’s various Turtle titles, I wasn’t too enthused with him. But by this point, he’s really refined his style, no longer trying to stick to any ill-conceived “style guides” for the characters and his pencils are all the better for it. Though Donatello’s head seems a little too small for his body, the characters look great and the cartoonish expressions given to them really gives the story a much-needed shot of pizzazz.

Donatello and Leatherhead may not be much fun to read, but it’s a lot of fun to look at, especially now that Ho has really found his niche. And even though the characters are pretty flat, the set pieces and “Journey to the Center of the Earth” adventure make for some pleasing action. It’s a bit forgettable, but if you want to see some more Mutanimals before they die, look no further.