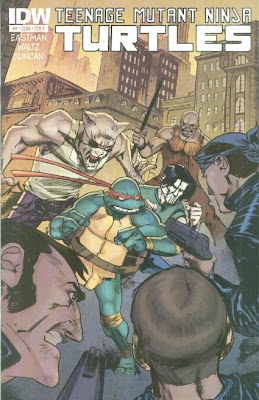 Cornered in the park, Raph and Casey are approached by the gang’s leader, Old Hob. The sight of Hob triggers a repressed memory in Raph, who recalls Hob (as a cat) trying to eat him before getting attacked by Splinter. Casey tells Raph to snap out of it as the gang moves in under Hob’s orders to pulverize the two. 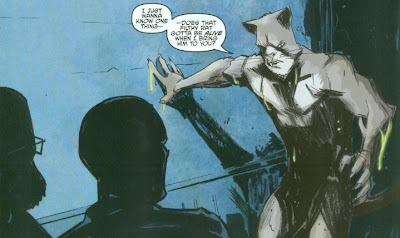 Fifteen months ago. At Stockgen labs, Baxter Stockman gets a damage assessment from Chet regarding the ninja break-in. Though the terrapin exo-suit armor samples remain, the psychotropic serum was lost with Splinter and the traces of super soldier mutagen recovered from the alley have been tainted beyond use. Baxter is infuriated, as the ninja belonged to a rival of General Krang, who provided him with his secret mutagen at great risk; Krang won't like this news one bit. Chet suggests that if they can find Splinter, they can regain both the psychotropic drug and the mutagen from his blood. Baxter laughs at the idea of tracking down a single rat in New York City, but a slimy, furry, one-eyed individual comes crawling into the lab, assuring them he can do it: Old Hob.

At a police station, April tries to explain the ninja break-in to the cops, who are reluctant to buy her story. While relating the events, she recalls that it was Splinter who pulled the fire alarm and saved her life. Meanwhile, down in the sewers, the now-mutated Splinter tells his three Turtle sons to hurry up and make some distance between themselves and the lab. The Turtles recognize Splinter as their father, but don’t remember their previous lives. Splinter explains that all will become clear in time and decides that their new lives requires new names, so he gives them the ones April had ascribed to them: Leonardo, Donatello and Michelangelo. More importantly, though, they must find their missing brother, Raphael. 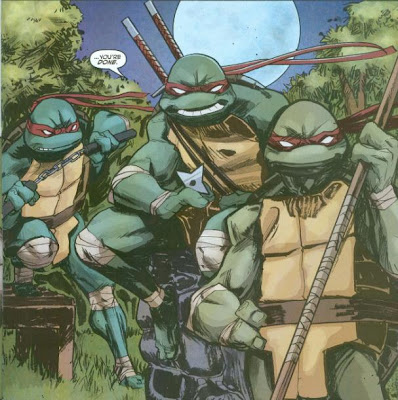 Back to the present, Casey and Raph (who doesn’t know he’s Raph) are holding their own against Hob’s thugs, but the numbers eventually overwhelm them. Casey is taken down by a brick to the head while Hob pistol-whips Raph into submission. Hob is about to blow Raph’s brains out when a series of shuriken strike him in the arm. The other three Turtles have made it just in time and demand Hob back off. Hob isn’t about to go back to Stockgen empty-handed and savagely attacks Raph while the other Turtles deal with the last of the gang. Raph pummels Hob and is only prevented from killing him by Leo. The three Turtles tell Raph his name and memories come flooding back. Momentarily, Casey recovers and is shocked to see four mutant Turtles instead of the one. 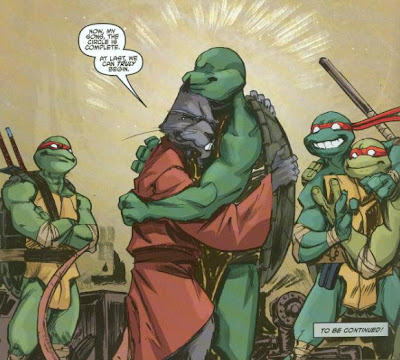 Down in the sewers, Raph is finally reunited with his father. Giving Raph a hug, Splinter announces that now things can truly begin…

*The story "A Lot to Learn" takes place after this issue and acts as an epilogue.

*The break-in at Stockgen by the mysterious ninja was shown in TMNT (IDW) #2.

*This issue was originally published with five variant covers: Cover A by Dan Duncan, Cover B by Kevin Eastman, Cover RIA black and white Eastman version, Cover RIB by Fred Hembeck and Cover RE exclusive to Jetpack Comics, by Kevin Eastman and Peter Laird.

Four issues and $16 in and NOW the story can “truly begin”? sigh

Waltz is clearly taking a very slow-burn approach to the series, though I think he’s really starting to stretch things to their limit. In 88 total pages thus far, we still haven’t gotten the full origin of these characters, we still don’t know their motivations, we still know next to nothing about the primary villains of the series and the majority of the cast is still floating around in isolated limbo, yet to encounter one another. While a portion of my criticism can be traced back to my own impatience, I think there needs to be a line drawn regarding decompression in comic book storytelling. Four issues, four months, $16 bucks and 88 pages later and we STILL haven’t gotten a complete story of any kind. I understand the desire of a writer to play things close to the vest and keep their hand closely guarded, but readers should be rewarded with a bit more than what we’ve been getting, lest you run the risk of burning out an audience who have been investing in a book and only received marginal satisfaction after the better part of $20.

I’m just wondering how long, at this rate, it’s going to take for the actual plot to unfold, the conflict to arise and things to start moving? By issue #10 will we even see the Shredder? Or General Krang in person? Or some other sort of conflict? Or will we STILL be drudging through the origin story? At the rate things are going, I wouldn’t be surprised. After all, we’re four months invested in this book and the plot still hasn’t “truly begun”?

As for the infinitesimal smidgen of plot advancement that has occurred in this chapter, I do feel we’re finally starting to get somewhere, but only in baby-steps. So Hob is working for Stockman, who wants to get Krang’s mutagen back via Splinter’s blood? While his motivation is a bit shallow (“he tore out my eye!”), at least he’s got more going for him than just being a Tom & Jerry “cats hate mice” trope. My question is, though… why doesn’t Stockman just take the mutagen from Hob’s blood and cut out the middleman? I suppose because Splinter was the only one with the psychotropic serum and he needs that back specifically? But then, what does the psychotropic serum do for Splinter that the mutagen hasn’t done for the Turtles and Hob? Human-level intellect, memory recall and speech capabilities? Hob and the Turtles seem to be on the same level as Splinter in those categories. Hoping we get an explanation on what kind of looks like a plot hole (and hoping we can get it in under five issues).

The part of this issue that’s had fans talking, though, is Splinter’s cryptic words about his and the Turtles’ “previous lives”, coupled with Waltz’s assurance that there’s more to the fifteen month gap than the audience yet knows. I criticized the fifteen month span in previous reviews, as I felt that wasn’t long enough for the Turtles to gain their personalities, familial bonds or ninja skill. Waltz’s resolution seems to be that the Turtles weren’t always turtles? Before they were Mutant Turtles, before they were pet store turtles, they were… something else? All signs point to their being actual humans, and Splinter being an actual human as well; making them his legitimate sons rather than adopted ones. Pure speculation on my part; we’ll have to see how that plays out. As it stands, though, I think we’re in for a major departure from any incarnation of the TMNT’s origin we have ever had before. I’ll reserve judgment until I see it (hopefully sometime within the next twenty issues, but I won’t hold my breath).

While the leisurely paced story has finally worn my patience down, I can’t supply too many complaints about the art or the coloring. With every issue, I’ve come to appreciate Dan Duncan’s style even more, and while he isn’t exceptionally innovative, his characters are highly expressive and I really dig his ink work (looks kinda like he uses a Sharpie for some pages, but the effect definitely works). I like Ronda Pattison’s subdued, earthy tones for the colors and it makes certain elements with brighter colors really pop on the page, such as the glowing mutagen or April’s red hair.

All in all, I think this is the most critical I’ve been of the series so far. If you boil these first four installments down to everything that matters, I think there’s actually enough content to fill two very strong issues. But stretched thin over four issues, I’m growing a bit agitated with the decompressed pace. Maybe it was just that last line of the issue, that the story hasn’t even “truly begun” that left me in such an irritated mood; like it was rubbing the decompression in my face. But fact of that matter is, four months and $16 and we’re still not even through with the origin. Brian Michael Bendis would be proud.